For thrills and water fun during the heat of summer, take the kids whitewater rafting. While teens may love the larger rapids that can feel as fast as a Six Flags rollercoaster ride, there are also slower rapids that are more like a Huck Finn paddle for younger kids. 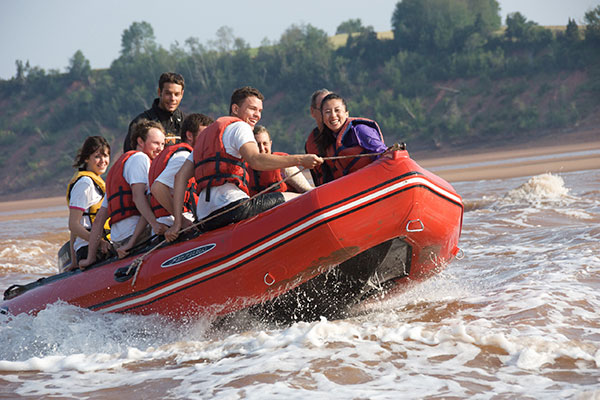 Rivers are rated by varying degrees of whitewater. Quiet water is slow-moving or still water. Class I is faster-moving water, with riffles and small waves; Class II has moderate rapids or waves with relatively few obstructions; Class III is a swift current with more obstructions; Class IV is a powerful current with drops and many obstacles; and Class V is the most advanced, with series of complex rapids, drops, and challenging obstacles, better suited for a raft. Class II and III are best suited for younger children, while older children can sample Class III, IV and even the occasional Class V.

These are the best whitewater rafting adventures for families.

When the Bay of Fundy, home to the highest recorded tides in the world, floods one of the rivers that feeds the mighty bay with tons of seawater, it creates a massive wave or tidal bore. Yet, on the Shubenacadie River, where you can witness the spectacle with Rafting Canada, the tidal bore is merely the start of the adventure. The surge of water causes the flow of the river to reverse directions and create standing waves. The motorized raft slams into a succession of waves, often in excess of 8 feet, as you’re trying hard to hang on to a rope in this waterlogged version of a rodeo. Completely drenched, you can’t help but laugh at the absurdity of it all. If you do get tossed, you simply land on soft mud, a cushiony welcome mat for the brackish water. It’s great fun for the whole family. Minimum age is 12.

Most folks make the mistake of driving to the Grand Canyon, taking a peek down at the mile-deep canyon and then leaving. To truly appreciate the Grand Canyon, you need to spend some time at the bottom of that abyss, rafting on the Colorado River. Grab one of Arizona River Runners’ six or seven-day motored trips that speed up when the river gets too mellow. That doesn’t happen often, because this portion of the Colorado is an adrenaline-pumping Class IV run with some Class V rapids thrown in for good measure. Three-day excursions are also available. Realize that the water on the river in the Grand Canyon is dam-released and ice cold. Arizona River Runners has been guiding families down the Colorado since 1970.

A four-hour drive south of Portland is the remote Rogue River. Cutting through dense forests of pine and scrub oak, the Rogue is definitely off-the-beaten-track, a place where writer Zane Grey would think in peace and put his pen to the paper. So it’s no surprise that the Rogue became one of the first rivers to come under federal protection when 84 miles were designated a Wild and Scenic River in 1968. On a weekend trip this summer with Rogue Wilderness Adventures, you’ll raft an 18-mile chunk of the predominantly Class III Rogue, spending the night in a cabin at historic Morrisson’s Lodge. Minimum age is 6.

One of the original rivers in the 1968 Wild and Scenic Rivers Act and a centerpiece of Idaho’s 2.2-million-acre River of No Return Wilderness, the Salmon River deserves its reputation as one of the premier whitewater runs in North America. What this means is a rip-roaring ride through narrow canyon walls, with glimpses of Bighorn sheep and Rocky Mountain elk on the shores and eagles and ospreys flying overhead. Once you reach land, you can hike up side canyons, soak in natural hot springs and fish to your heart’s content. Go on one of ROW’s four- or five-day whitewater rafting runs in summer (minimum age 5), and you won’t be disappointed. Meals and overnight camping are included in costs for an all-inclusive experience. 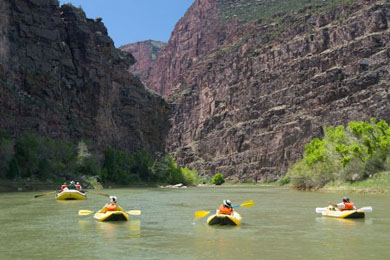 Roaring 84 miles through northwestern Colorado and northeastern Utah, the Green River is one of the most desolate runs in the States. The Class III whitewater snakes through rarely seen Dinosaur National Monument, where red walls rise sharply to some 2,500 feet to effectively block out civilization. In its place, you’ll find one of the largest concentrations of endangered peregrine falcons in the States, along with bighorn sheep and mule deer. John Wesley Powell explored the Green in 1869 and was so impressed with the river that he gave the most exciting rapids names like Disaster Falls, Triplet Falls, and Hell’s Half Mile. Adrift Adventures features a five-day run on the Green in June and August.

Two arms of the same river, the headwaters of the Tatshenshini and Alsek Rivers are in British Columbia and the Yukon Territory. They converge shortly before entering Alaska’s Glacier Bay National Park. Both are stunningly beautiful runs through a United Nations World Heritage Site. The highest coastal mountains in the world and towering glaciers slide down to the river’s edge. The Alsek and its Class IV and V waters are for adrenaline junkies, while the Tat is a wee bit mellower ride. Consider the Tat to be North America’s version of the Zambezi, where hippos and crocs are replaced by grizzlies, moose and bald eagles flying overhead. Go with OARS, a reputable outfitter.

Riding the Class III rapids of the Kananaskis River, surrounded by the towering peaks of the Canadian Rockies, is a favorite two-hour family jaunt in these parts. It’s a rip-roaring ride on glacial-fed waters that will definitely cool you down when splashed. They call that a Canadian Kiss in these parts. Afterwards, drive on the nearby Highwood Pass, the highest road in Canada, and pull over to hike Ptarmigan Cirque. The trail winds slowly though a shaded forest of sweet-smelling pine, tamaracks and aspens, and soon rises above treeline to reward you with a stupendous vista of snowcapped peaks. Tours are offered for ages 6 and up.

Five hours west of Washington, D.C., in the heart of West Virginia, families go whitewater rafting on West Virginia’s New River. Bordered on both shores by lush oak, hickory and black cherry trees, this Class III-IV waterway cuts through a gorge of sandstone, shale and coal, bumping into rapids with names like Surprise and Greyhound Bus Stopper. Located in Beckley, West Virginia, on the New River Gorge, Class VI Mountain River has been taking shrieking families down the rapids of West Virginia since 1978. They also offer canopy tours and cabin lodging. Minimum age is 10 years old.

If you spend any amount of time in Williamstown or North Adams, Massachusetts, during the summertime, you’ll notice the influx of cars crossing the New York border with kayaks tied to their roofs. Just past the Mohawk Trail off Route 2, the Deerfield River offers the best whitewater rafting in the state. Dam releases by the New England Power Company cause rapids to tumble down two stretches of the river, the exhilarating Class IV run in the Dryway and the Class II to III rapids farther south in the deep pools of Zoar Gap. Outfitters like Zoar Outdoors will take you on a guided day trip. Minimum age on the Dryway is 14 and age 7 on the Zoar Gap.

Moments after entering your raft and going over your first major rapid, Exterminator, you immediately realize this 14-mile stretch of the Penobscot is a serious joy ride that will have you shrieking with abandonment as the raft bends, turns and twists backwards with every succeeding drop. On the backside of Mount Katahdin, every view is a winner. Go with a reputable outfitter like Northern Outdoors, who ran their first trip down the Penobscot in 1976. Minimum age is 12 on the Lower Penobscot and 15 on the Upper Penobscot. 8 U.S. Destinations Where You Can See the Northern Lights