When your little prince or princess sees the huge Victorian house perched dramatically on the sea-cliffs of southern Maine, she’ll think she’s discovered a fairytale castle. And after seeing the plush accommodations inside and lapping up the attentive personal service, you’ll be inclined to agree with her.

Ogunquit’s Beachmere Inn harkens back to the 19th century, when summer was filled with cottages and steamer trunks, and an immaculate green lawn spotted with croquet wickets overlooking the rocky surf. The atmosphere is anything but stuffy, with a casual friendliness cultivated by the generations of family ownership. The resort’s one drawback is its lack of an outdoor pool, but this is compensated by its location — just a 10-minute walk to one the most beautiful beaches in New England and an even closer walk to a secluded beach cove.

The Beachmere’s original building dates back to 1885, when it was built as a summer residence by a Massachusetts industrialist Charles Hoyt (look for the ‘H’ on the weathervane). He added several more cottages for other family members, and then in 1937, the whole complex was bought by the Merrill family who converted it into the inn and whose descendents still own it today. In the 1960s, they added the inn’s main building, which encircles the Victorian and now includes a bistro, spa, and small indoor pool and hot tub.

The entire complex was renovated in 2008 to open up the rooms with large picture windows that take in one of the resort’s best features — its drop-dead gorgeous view of the Maine coast. The enviable location and friendly service makes this one of the premier beach resorts in town, and one of the most sought-after by families.

In all, the property consists of six different buildings with 73 guestrooms, all of which are turned out in a modern, unpretentious style. The dÃ©cor is beach-y and airy, with a palette of white and blue and beechwood furniture designed by a local New England carpenter. Beds are big and comfy, with high thread-count Frette linens, and bathrooms are done in sand-colored tiles. Free Wi-Fi is available throughout the property and cribs and rollaway beds are available upon request. DVD players are available in all accommodation styles. That said, rooms tend to vary significantly in size and amenities.

The Victorian
The inn's historic Victorian cottage is its flagstone property, situated closest to the ocean, and it features ocean views from private balconies or decks in most of the rooms. The 27 guestrooms tend to be smaller than those in the main building, with most including one queen bed, though some have two. All of the rooms feature a flat-screen TV and kitchenette with a microwave, hot plate, toaster and coffee maker. Several of the rooms also feature wood- or gas-burning fireplaces. Bathrooms have a mix of tubs and showers.

Beachmere South
The best choice if ocean views are what you're after, the Beachmere's south building features 24 rooms, all with huge windows overlooking the ocean and many with balconies or terraces, as well. The building also has a number of suites perfect for families, including six high-end suites added in 2007 facing the ocean, as well as nine suites with queen or king beds, and two twin beds, as well as seven smaller rooms with one queen and one twin bed. All rooms include flat-screen TV's; kitchenettes with a microwave, hot plate, toaster and coffee maker; and bathrooms with both a shower and tub.

Beachmere West
The inn's main building offers the height of luxury, with 16 upscale suites with king bedrooms and oversized bathrooms with double vanities. All of the rooms include flat-screen TV's, and kitchenettes with a microwave, hot plate, toaster and coffee maker. Several of the rooms also feature gas fireplaces and all include balconies or terraces. This building is also the most convenient of the six, with a restaurant, the lobby and a spa right downstairs.

Mayfair House
This small house set back up the hill from the ocean on a secluded side street includes two units that can be rented separately or together -- a ground-floor suite with a queen bed and twin sofa bed and an upstairs studio unit with queen and twin beds. What it lacks in an ocean view, it makes up for with beautifully tended gardens and a small yard and terrace. The downstairs unit includes a full kitchen; upstairs is a kitchenette. Bathrooms include a shower and tub.

Heartstone House
A great choice for a large family, this cottage up the hill from the main property has three bedrooms including one king, one queen and one twin bed. It's possible to snatch a little bit of an ocean view from the balcony off the main bedroom. The cottage also includes a full modern kitchen and a separate barbecue hut in back. The dÃ©cor here is different in style than others on the property, including lovely antiques, which conjure an old-world atmosphere, though may present a hazard to small children.

Bullfrog
At the top of the hill, this large guesthouse contains five units, each with two rooms. Each unit contains one queen bed in one bedroom, with the other room containing either double or twin beds. All have kitchenettes and TV's, and bathrooms have a mix of showers and tubs. Outside, the house has a swing set and grill with tables and chairs for outdoor eating, though sadly no view of the ocean.

My favorite hotel in the USA

I have been a guest at the Beachmere Hotel for many years (I would estimate about 15 years) and every stay has been a pleasure.
The Beachmere is located on the Marginal Way in Ogunquit and I cannot think of a more beautiful location to be. Every room has an Ocean view and even in bad weather one can just sit at a window and be pleased.
I have been there by myself, as a couple, with family, friends... all the situations have been delightful. The service is great and everybody is friendly and professional

This is the sixth year we have returned to the Beachmere Inn for a girls shopping getaway. It seems each year we enjoy ourselves more. The staff is so friendly and accommodating. The rooms are always exquisitely clean and comfortable and the complimentary continental breakfast is scrumptious. They have done a wonderful job renovating The Bistro. We enjoyed a light supper of homemade pumpkin soup and a veggie sandwich. I would venture to say it was as delicious as any one of the more upscale restaurants in Ogunquit. The wait staff were friendly and delightful. We also treat ourselves to a massage each year. We have had the same two masseuses, Meredith, and Snow for several years now and they always do an amazing job. After breakfast we like to take a walk along the Marginal Way to Perkins Cove, where there are delightful gift boutiques. The Beachmere is a perfect location to do that because you can walk right out the front gate and be on the Marginal Way path. Needless to say, we will be returning again next year for another wonderful time at the Beachmere Inn. If you're looking for the quintessential Maine getaway, the Beachmere Inn is where you want to go.

Lawn Games
Much of the activity at the Beachmere is situated on its big lawn overlooking the sea-cliffs. The inn provides all manner of games to entertain kids, including croquet, badminton, and cornhole, while their parents lounge on comfy beach loungers on the grass. For smaller kids, there is also a playset with swings overlooking the view. For bigger kids, yoga on the lawn is open to teens with parents' permission.

Ogunquit's Marginal Way
The inn is situated directly on the Marginal Way, Ogunquit's romantic cliff walk, which winds its way for 1.5 miles between Ogunquit's main beach and Perkins Cove. The beach is an easy 10-minute walk along the path and a boardwalk, or the more adventurous can wade or swim across the Ogunquit River, which separates the cliffs from the beach just underneath the resort. The Marginal Way also leads to a set of stone stops down to a small cove situated directly beneath the resort, which has a gentle public beach especially good for little kids.

Water Sports and Activities
The inn doesn't have a formal children's program, but does help arrange water activities including surfing and standup paddle boarding through the company Liquid Dreams, and can also arrange for lobster fishing tours and a one-on-one tide pooling school for kids.

Playroom
In the lower level of the main building is a small playroom for kids, which includes a DVD player, train table, and LEGO table. This is especially convenient for parents who'd like to sneak in a workout at the fitness room next door.

DVD Rentals
When the kids are all tuckered out from a day in the sun, the inn offers DVD rentals that come with freshly popped popcorn.

Area Attractions
The inn can make arrangements for discount playhouse and golf tickets.

Complimentary Meals
Dining options are somewhat limited at the Beachmere; a continental breakfast is included with all of the rooms, and features fresh muffins, scones, and other pastries baked in-house (and sometimes Congdon's Donuts from up the street in Wells), but no hot dishes. The inn will also pack picnic lunches for guests for the beach, and three nights a week features an outdoor burger bar on the lawn with hamburgers, hot dogs and beer. A weekly Lobster Bake also takes place on the Inn's lawn.

Blue Bistro
The inn's restaurant is small and casual, featuring a mix of light pub fare, sandwiches and salads. Lobster rolls, of course, are particularly good, served on a grilled brioche with just a little bit of mayo, celery and lemon. Other highlights include pulled pork sandwiches and crab cakes. The bistro also features a limited selection of entrees, including a catch and pasta of the day, and Delmonico steak. The atmosphere is fine for kids, with a well-lit dining room with light wood spindle chairs and a children's menu with burgers, hot dogs, grilled cheese, mix-and-match pasta and meatballs. High chairs and crayons are available.

All About the Extras
Babysitting
Childcare is available from both in-house staff and outside babysitters.

Laundry
Coin-operated laundry is also included in the main building.

The Art of Smart Timing
Ogunquit's high season runs from June 1 to Labor Day; expect warm, bright sunny days and cool ocean breezes. Of course, since the high season is short, you can also expect to pay a premium at this time. You can save a little money by booking in May or September, though you are taking some chances with cool weather, especially at night -- this is Maine, after all. Late fall is chilly, though offers its own beauty on the rugged sea coast. The inn is closed January through April.

Getting There
Ogunquit is an easy 90-minute drive from Boston's Logan International Airport (though you'll have to time traffic in the summer), and just one hour from Manchester, N.H., or Portland, Maine. The inn can help arrange shuttles to the hotel.

Getting Around
A car is by no means a necessity in Ogunquit, and can be a downright liability with parking in summer. A trolley shuttle run by the town offers convenient transportation to all of Main Street, Main Beach and Footbridge Beach, and all the way down Shore Road to Perkins Cove.

For Mom and Dad
The Beachmere's beautiful spa offers couples massages, deep tissue and pregnancy massages, pedicures and exfoliation. The spa also includes a cedar sauna and a large 10-person hot tub to soothe your nerves.

Anchorage by the Sea 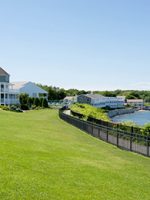 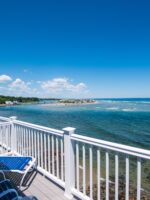 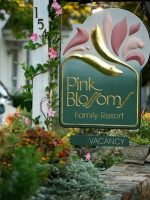 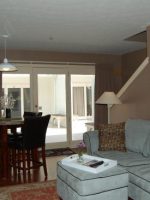 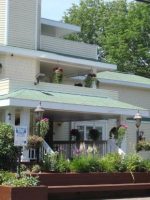 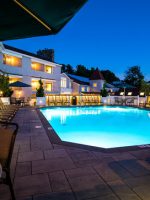 See All Ogunquit, ME Hotels