Featuring stunning views of Calgary’s skyline, Delta Hotels by Marriott Calgary Downtown provides guests with large rooms, comfortable beds and modern amenities in a convenient downtown location. Guests traveling with their families will love the number of different room options available. Many of the hotel’s guestrooms and deluxe rooms have two queen-sized beds and accommodate up to four people. Many of the suites can also sleep up to four guests through the use of the in-room sofa bed. Amenities for families include an indoor swimming pool, in-room video game consoles and free Wi-Fi. Guests can enjoy dining at the onsite Elements Bar and Bistro for breakfast, lunch and dinner.

This was the last night in Canada and this hotel gave us a nice restful nights sleep. There is always a cab close and needed one as we had an early morning flight. It is about 20 minutes to the airport which is not bad .

My wife and I had a two night stay at Delta Hotels by Marriott Calgary Downtown.

I have recently stayed in a number of "recently renovated hotel" none of which had done anything more than a fresh cost of paint and new a couple of pieces of new furniture which do more to show the shortcomings of the rest of the hotel than the improvements.

Thankfully this was not the case this time, everything from the reception, bar and most importantly the room was fresh, clean and very modern. The biggest surprise was the bathroom which is often overlooked in a hotel update due to the obvious cost, this time however the bathroom was large bright and very well appointed.

There is only one negative about our stay which I can't blame on the hotel. There is a fire station located right next to the hotel, there were a number of fire trucks that were dispatched in the early morning which woke me up a number of times.

Overall it was a great stay and I would highly recommend anyone to stay here. 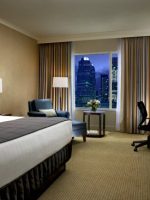 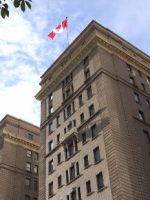 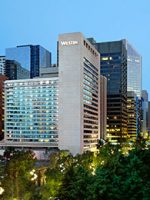 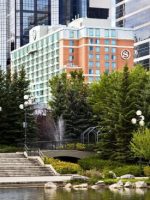