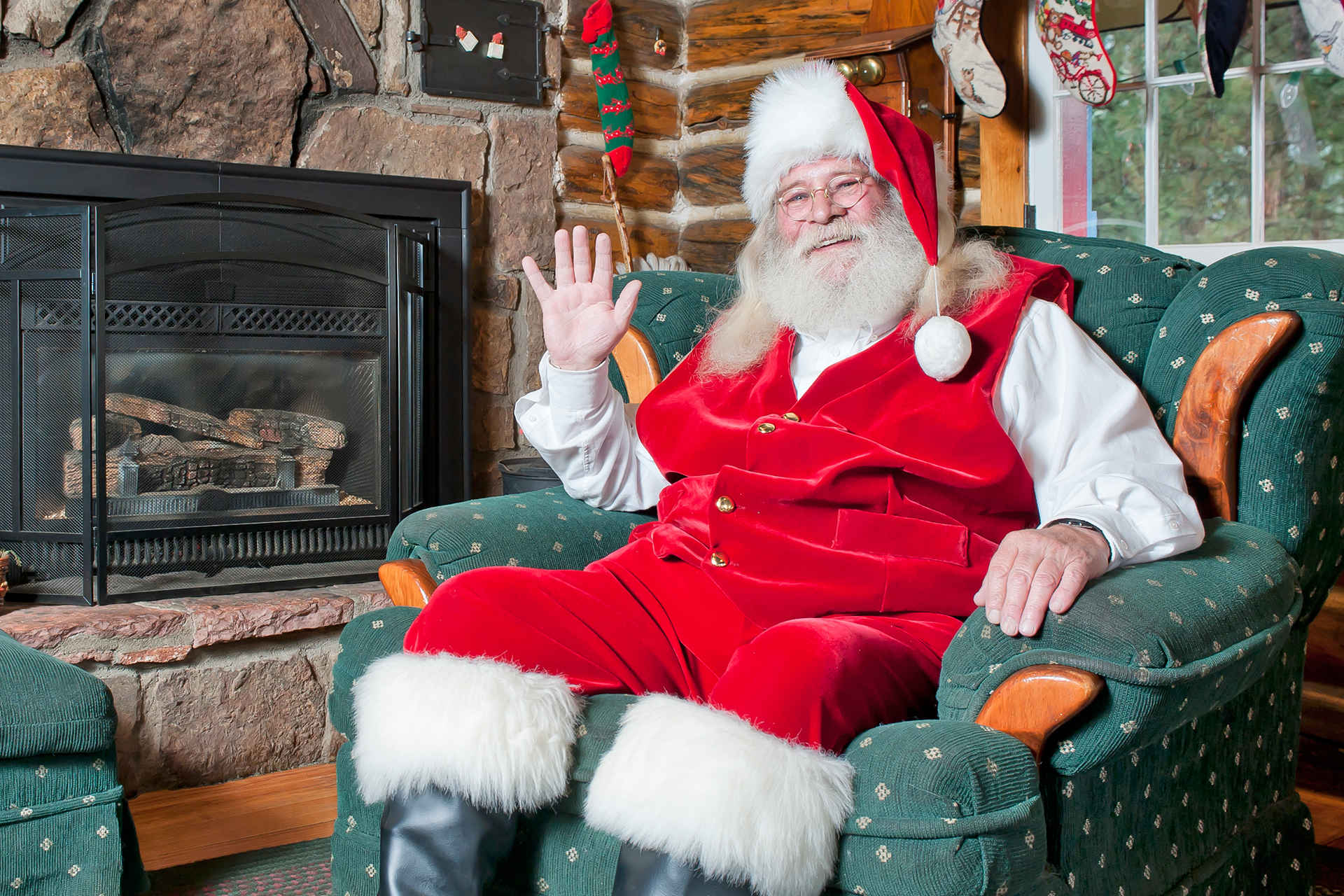 Traveling over the winter holidays? Don’t worry about missing Santa Claus — he makes sure he reaches everyone on the “good” list no matter where they are! And these unique Santa meet-and-greet experiences offer more than just the chance to report good behavior and make gift requests. Santa may show up on skis, by train, in a boat or in SCUBA gear! This is our list of the best Santa sightings… and we checked it twice! This North Pole is actually at the foot of Pikes Peak in Cascade, Colorado (about an hour from Colorado Springs), and it's where you'll find Santa's Workshop, a Christmas-themed family amusement park with more than two dozen rides -- including Santa's Sleigh zip-line -- games, shows, shops, eateries, a petting zoo and an arcade. You might catch a Santa sighting while riding the miniature train, antique carousel, or aerial tram, but a visit is guaranteed in Santa's House.
2/9 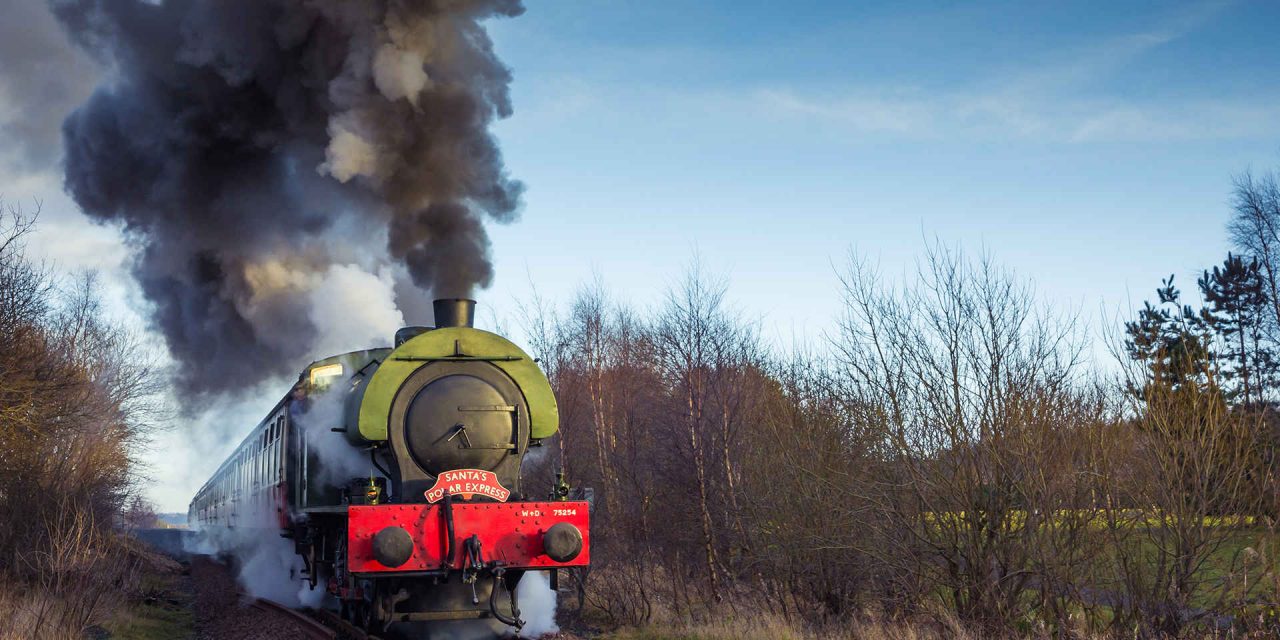 You can ride The Polar Express on several railways this holiday season! The evening excursion typically includes storytelling, carols and refreshments before stopping for a Santa sighting at the North Pole. Santa sightings by train should be easy to find, with numerous Polar Express locations throughout the country.

See 10 Polar Express Rides That Will Wow Your Kids for our favorites.
3/9 In Asheville, North Carolina, sightings of Santa can be seen from above as he rappels more than 200 feet at Chimney Rock State Park on Dec. 2 and 9, 2017. Families are invited to watch Santa's daring climb, and check out the 75-mile panoramic views from the top for themselves.

Claus can also canoe! On Dec. 9, 2017, he'll sail into Waikiki Beach, Hawaii, in an outrigger, greeted by children performing hula at the Outrigger Waikiki Beach Resort. On Christmas Eve, he'll do the same at the nearby Halekulani hotel.
4/9

No stranger to snow, Santa will be found skiing the slopes at several resorts this season. On the annual Santa Sunday at Sunday River in Newry, Maine, some 250 skiers in red suits will be at the South Ridge base area on Dec. 16 and 17, 2017.

On Christmas Eve, Santa's making two appearances: on the slopes of Appalachian Ski Mountain in Blowing Rock, North Carolina, and at Schweitzer Mountain Resort in Sandpoint, Idaho, where kids can ski down the mountain alongside Santa Claus!
5/9 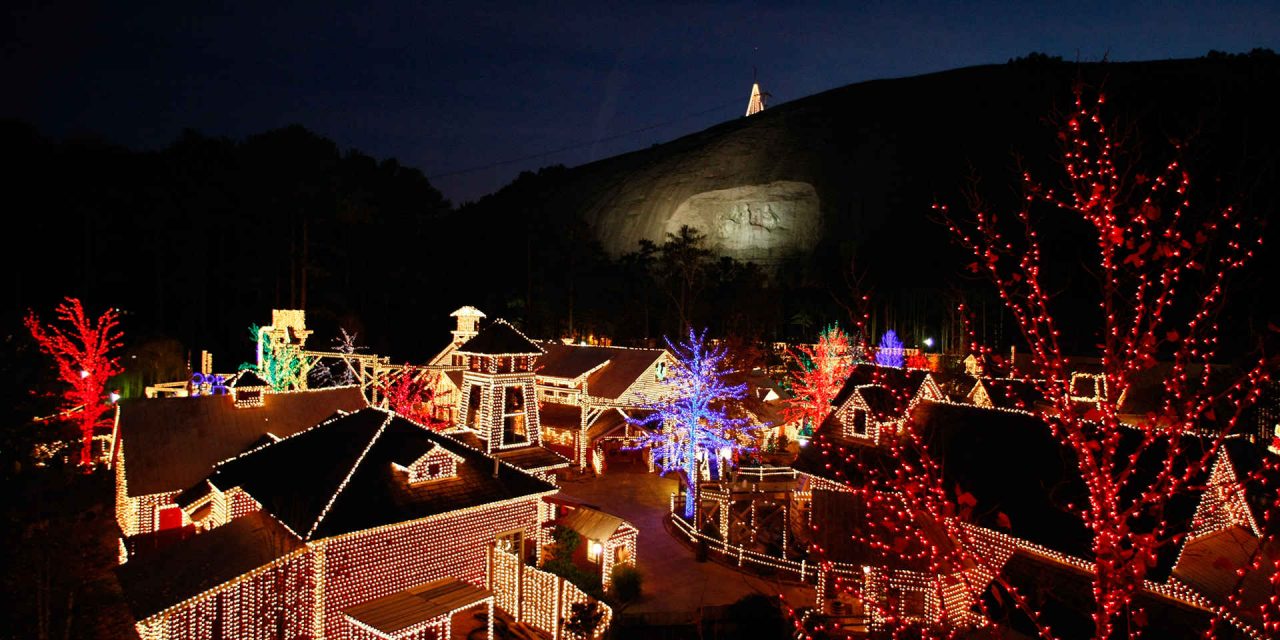 At Stone Mountain Park near Atlanta, Georgia, the annual Christmas celebration (Nov. 11, 2017 to Jan. 3, 2018) includes a nightly parade with a Santa sighting, as well as the Snow Angel, who flies over the crowd before the fireworks finale.

In Fort Lauderdale, Florida, Santa will be the grand marshal of the Seminole Hard Rock Winterfest Boat Parade. In Iberia Parish, Louisiana, he's part of the annual Christmas Boat Parade on Bayou Carlin in Delcambre. A cowboy Santa will greet guests at the historical Stockyards National Historic District in Fort Worth, Texas. Before the Christmas parade, kids can participate in Cow-Camp and cheer on the armadillo races.
6/9 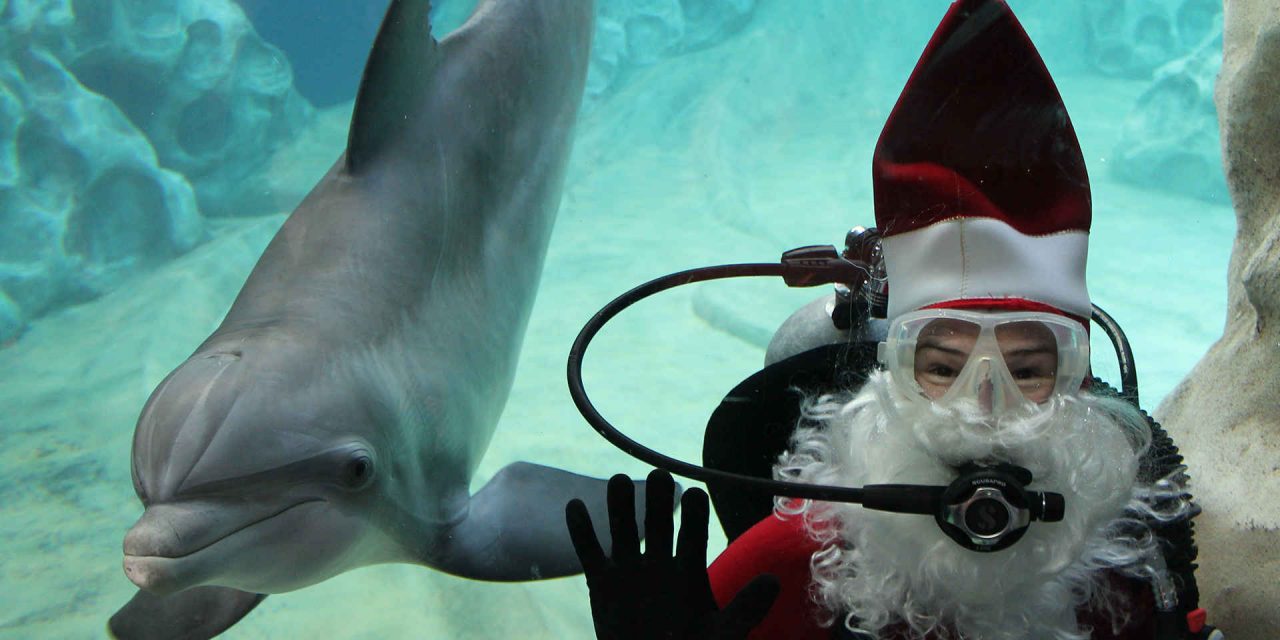 "SCUBA Claus" gets suited up at the Georgia Aquarium in Atlanta, then plunges into the world's largest aquatic habitat to swim with whale sharks and manta rays. Look for him during the noon and 12:30 p.m. dive shows in December.

If the kids are seeking a Santa sighting off the mainland, the Hawaiian Aquarium, part of the Maui Ocean Center in Wailuku, Hawaii, SCUBA Claus and his sidekick Elf visit during the 12 Days of "FISH-mas." In late-November, Santa begins in historic Petaluma, floating into the downtown harbor aboard a festive tugboat. After disembarking, he and Mrs. Claus distribute candy canes from two antique thrones. Later, he grabs a surfboard in Capitola to hang 10 into Main Beach, followed by his reindeer in canoes. He meets children at his beach chair while Donner, Blitzen and the others pass out candy. Finally, he'll head south to San Diego, and sail into downtown's Seaport Village on watercraft -- wearing board shorts and flip-flops, of course.
8/9 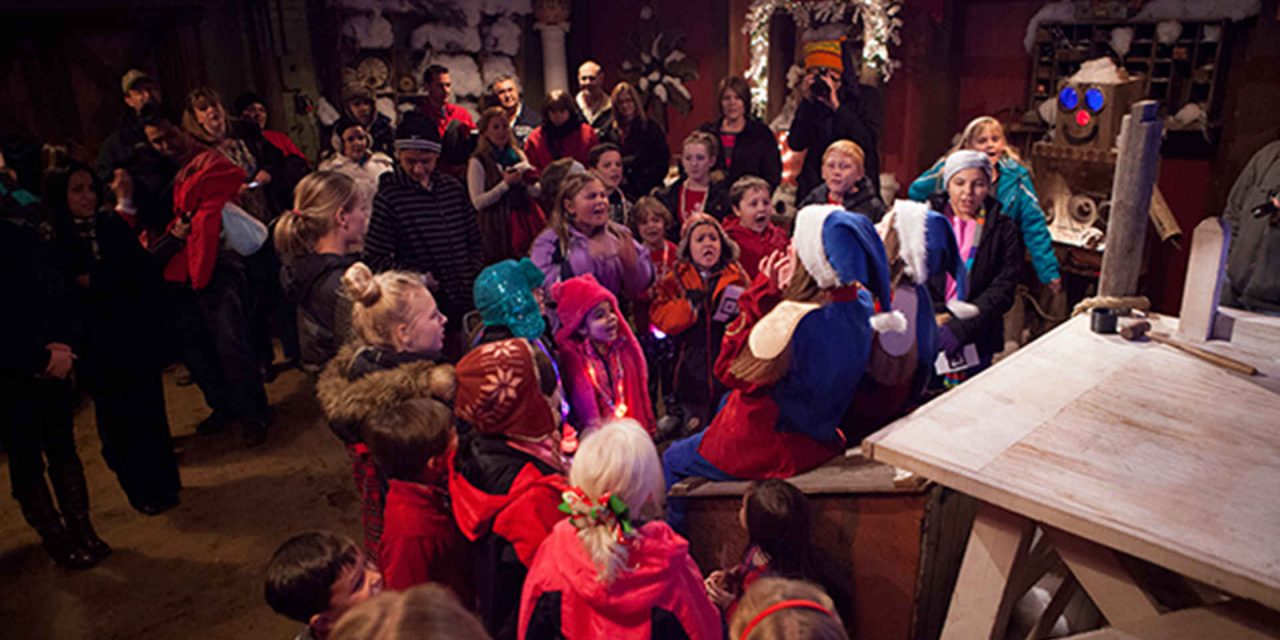 In the White Mountains of eastern Arizona, you can help elves build toys in Santa's workshop. During the North Pole Experience in Flagstaff, Arizona, visitors travel through a magic portal aboard the Candy Cane Express trolley to reach the workshop. You'll get access to Santa"s top-secret "Area 47," Sleigh Hanger and the main factory floor. Kids sit in on story time with Mrs. Claus and then meet her hubby. Lodging packages are available to make it an overnight stay.
9/9 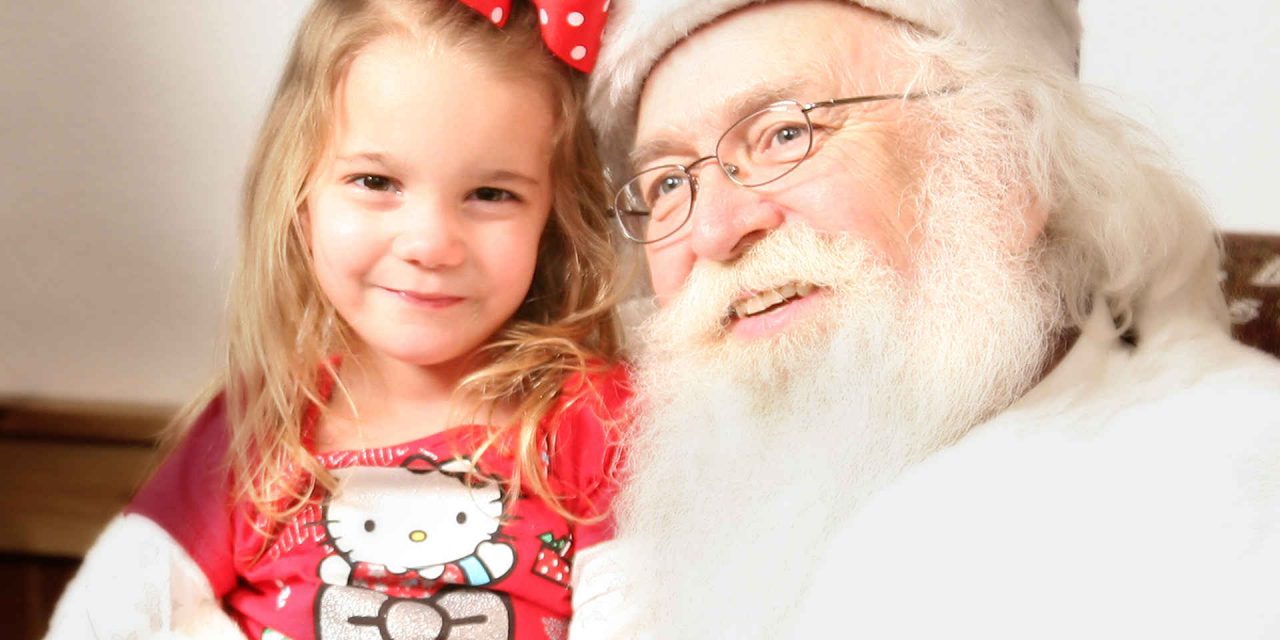 You can find his spirit throughout the town named for him: Santa Claus, Indiana. You'll have Santa sightings at his usual haunts, including the Santa Claus Christmas Store and Santa's Candy Castle. You can have dinner with him and the missus at Santa's Lodge, too. After dark, families enjoy driving through the 1.2-mile Land of Lights to learn the story of Rudolph the red-nosed reindeer. While you're there, send your mail from the local post office for the official Santa Claus postmark.