I am very picky when choosing hotels. We liked this hotel. The hotel had a slightly strange scent when you walk in, but you don’t notice it after you are in it. We can tell the hotel is older but they have redone it. The rooms were nice, spacious, and very clean. The breakfast was good, too. The hotel staff was very friendly. The rooms were very quiet. The pool was very very clean. It’s a small pool. The pool room was crazy hot if you weren’t swimming. The hot tub was way too hot to sit in longer than 5 minutes. My kids loved the pool because it was warm and the room air temperature was warm too. It was just us land folks that were too hot. The location was great and close to highways to everything. We would stay there again for sure.

Not up to Marriott Standards

My husband and I are Marriott reward members and frequently stay at Marriott hotels. To us the name Marriott means service and quality, and we have never been disappointed--until this past weekend when we experienced rude employees, a leaking air conditioner and soaked floor, and breakfast that lacked much to eat or drink.

We stayed at the Fairfield Inn and Suites Tulsa Southeast/Crossroads Village twice recently, while traveling to and from a family reunion. Our first stay, on July 24th was okay. After a several hour flight delay due to weather, we arrived very late to check in--around 12:30 am. The night clerk who checked us in was the best part of the trip. He was friendly and helpful, and we greatly appreciated that. He earns the single star in this review. The room was okay--older as other reviewers have mentioned, but nothing terrible. At breakfast the next morning, a good hour before it ended, they were out of everything from orange juice to eggs to utensils. Only one employee was working breakfast, including preparing everything behind scenes, and it was apparent that keeping things stocked was too much. He didn't know how to work the juice machine, and we waited about 10 minutes to get a fork. Not a deal breaker for a hotel, but not the best either.

Unfortunately our next stay, on August 2nd, was anything but pleasant. We arrived in the afternoon and found that we had been given a room with one king bed instead of the two queens we had previously. As my husband and I were traveling with our ten-year-old son, we returned to the front desk to see about a different room. Because we had booked through a third party, the front desk clerk said there was nothing he could do for us and we would have to contact the company we had made reservations through. What ensued was nearly 30 minutes of phone calls, as I sat in the lobby and spoke with Hotels.com and they, in turn, spoke with the front clerk. To be fair, the error did appear to be on the Hotels.com side, but they were more than willing to do what they needed to correct it. Unfortunately, the front desk clerk at the Marriott seemed determined to thwart that effort at every turn. He said they were sold out of rooms with two queen beds. This seemed odd, as the parking lot that afternoon, evening, and the next morning were never full. We asked about a roll out or a sofa bed, but the price for a room with a sofa bed was going to be nearly twice what we'd paid for the room with two queens. Hotels.com then found us another hotel nearby that had two queens available, but the Marriott desk clerk said he would still charge us for staying at the Marriott. Even if all of this was company policy and there was truly nothing he could do to help us, his attitude could have been so much better. We felt like he was the lord of the rooms and was pretty pleased about using his power to stick it to us. There was never any note of regret or even an attempt to improve the situation. Just a matter-of-fact, you're out of luck. Our ten-year-old later commented that this clerk had not learned the very important concept that how you say something is as important as what you say. Simply put, this employee was rude, unpleasant, and unhelpful. The very antithesis of the Fairfield Guarantee on their counter about warm hospitality, and an inviting, effortless experience.

We ended up keeping the same room, 223, the three of us sharing one bed. Not a great experience, especially when we knew we'd be traveling until midnight the next day. But we were dealing with it. Until later that evening when my husband stepped on the carpet and found it was soaked. We had gone out to eat and come back to find the air conditioner leaking significantly. My husband went downstairs to let the front desk know. The same employee was still working, so my husband began by stating that we were not trying to get another room, but the floor was wet and the air conditioner was leaking. The employee acknowledged this, and said he would note it so we wouldn't be charged. There was no offer of another room or a maintenance call or even some extra towels to help sop up the water. We waited in the room, expecting--hoping--that we would get a call shortly about at least one of these options. But none ever came. So we moved our suitcases out of the way of the water and spent an unpleasant night alternating between attempting to go without the AC (Tulsa in August), and having more melting water on the floor, or letting it run and freeze and make continuous loud cracking noises.

At breakfast the next morning there was a sign on the juice machine that said out of order. The same, single, employee was doing his best to keep up, but still struggling, and there were considerably less people at breakfast than before--only two other tables besides ours. We are not coffee drinkers, so we opted to get water from the dispenser in the lobby but found it was warm and had been sitting for some time with old limes in it.

When we checked out, the desk clerk (a different one from the previous day) did not ask how our stay was, but I told him about the leak and the wet floor. He asked if we had notified the desk clerk the night before. I said that we had and nothing had been done. This clerk said that was because housekeeping was only available in the morning. I stated that this was clearly not a housekeeping issue, and he looked confused.

Overall this hotel is far below Marriott standards and was disappointing and unpleasant. 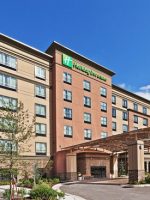 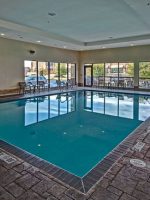