Located at the top of the village and the base of Mont Tremblant Mountain is the Fairmont Tremblant, the region’s only ski-in/ski-out resort. Amenities include both indoor and outdoor pools, AmeriSpa, two onsite restaurants, babysitting, and laundry services. This hotel is dog-friendly, as well. Rooms feature Keurig coffeemakers (and complimentary K-cups), mini-fridges, irons and ironing boards, and bathrobes. The windows even open to let in that fresh mountain air! Cribs and connecting rooms are available upon request, for a fee. Nearby activities include skiing (of course), hiking, mountain biking, snowmobiling, and river rafting.

We were on a CAA Tuxedo tour at the Fairmont in Mont Tremblant. On October 21st I asked for a wake up call at the front desk for the next morning. An older lady said she would put it in. Luckily we had set an alarm clock and were able to wake up on time for our breakfast. Our bus was heading for home at 8 am so after a great holiday celebrating our 40th wedding anniversary, I just hate to think what would have happened had we slept in. When I called the front desk to tell them about it the lady said she had no record of it. A good word of advice I guess is to always bring an alarm clock with you just in case. Everything else was superb.

I would like to start by saying the staff were helpful and friendly.

Pros:
The hotel itself is in the middle of a transition, entrance/restaurants are very nice, rooms are ready to be brought up to date as well!
The pools are nice, a bit less grand then in the photos but luckily we weren’t there at a peak time so we weren’t cramped for space but I could see it happening!
The hotel is also in a great location if you’re looking to be right in the village!
Great deep tissue massage at the spa

Cons:
We arrived at 11:45am on a Sunday ready to go for brunch that was advertised not only online but also IN THE ROOM until 2pm, apparently not the case as that is no longer offered and the dining area was closed for a private function, fair, but remove your advertising, especially in the rooms. When we inquired for somewhere in the village we were told it was passed that time and it was now lunch, so don’t go expecting brunch on a Sunday as it was hard to come by in the village.

Later that day we ventured to the pool area which was nice..as advertised we were looking for poolside beverages but were once again unavailable. Accepting that we were late in the season for a poolside vibe we looked forward to the cozy fires and marshmallows that were advertised to be happening in the evenings.... That evening we couldn’t find one soul in the area where the fires should’ve been... let alone a fire.

The next morning we were looking for smoothies as there is a smoothie bar in the hotel, inquired at the front desk and was told that it doesn’t open until later in the day, weird but ok.. later on when walking back into the hotel guess what’s advertised in the entrance?? Smoothie bar open daily at 7am....

Needless to say quite a few of the things we were really looking forward to from this hotel were not available, even though they were advertised on their website as well as their social media. 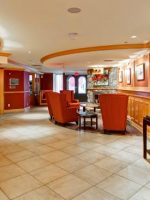 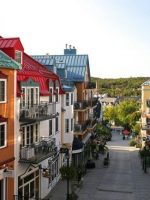 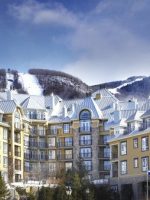 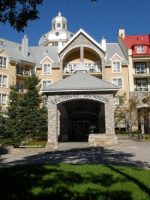 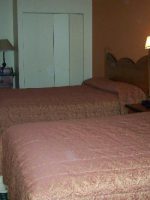