If you’ve been to a Renaissance festival or a Renaissance fair, you know they’re all about the show. The settings are often realistic recreations of 16th century European—particularly English—villages. Performers dressed in Renaissance costumes become colorful village characters, inviting you into scenes that often involve an appearance by Queen Elizabeth, who presides over jousting matches or proffers knighthood on worthy villagers.

These interactive, affordable events provide a lot of family entertainment value, and are worth working into your travel plans. While there can be adult content and attendees dressed in “interesting” costumes, many Renaissance fairs make a concerted effort to attract families with daytime, age-appropriate programs and activities. The are the best Renaissance fairs for kids. 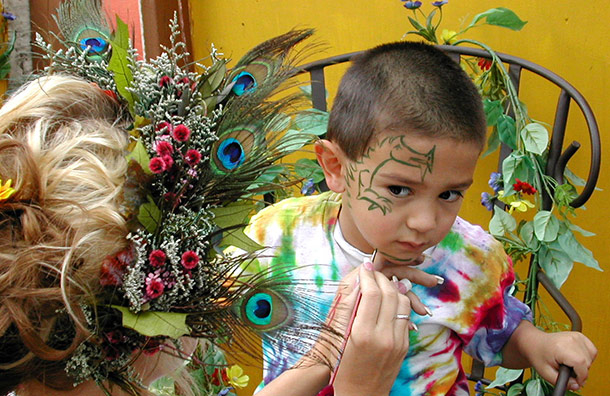 Introduced more than 50 years ago, the Original Renaissance Pleasure Faire bills itself as the world's oldest. Held on the 20-acre Santa Fe Dam Recreational Area in Irwindale, California, 10 minutes east of Pasadena, the fair recreates the English Seaport of Deptford on a celebratory spring day in 1574 when Queen Elizabeth visits.

A variety of entertainment takes place on 13 stages, along with a fully armored joust, music, dancing, parades, rides, games and food. Children can have their face painted or hair braided in the village marketplace, home to 125 artisans.

Everyone is encouraged to come in costume or rent one onsite, and children's sizes are available. Within Kids' Kingdom, children's activities include games, crafts, storytelling, songs, shows and character interaction. Popular programs include the Gnome Quest, Merlin's School of Magic and the children's Knighting Ceremony. 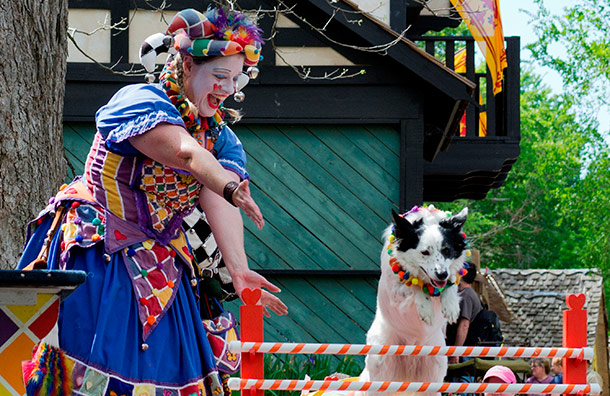 One of the largest in the United States, the Scarborough Renaissance Festival takes place in the village of Scarborough near Dallas and Fort Worth. Here, on 35 acres of land, the merry days of King Henry VIII are commemorated with full combat-armored jousts, birds of prey exhibitions, entertainment on some-20 stages, rides, games of skill, crafts, 200 old-fashioned shoppes, artisan demonstrations and distinctive food.

Offerings specifically geared toward children include attractions such as the Mermaid Lagoon, petting zoo and pony rides, plus Renaissance rides such as Jacob's Ladder, a joust ride and climbing tower. The Whimsey Stage is dedicated to kid-focused entertainment. 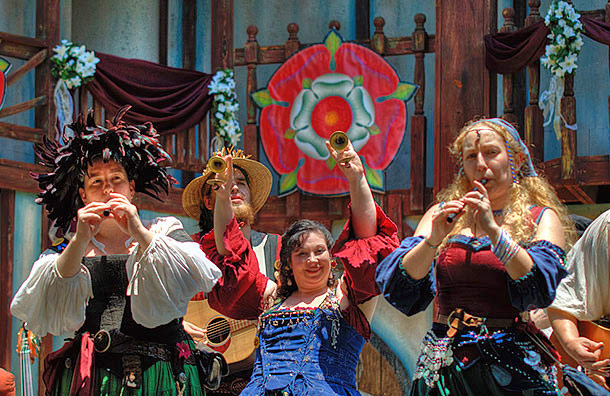 The largest of its kind in the Southeast, the Georgia Renaissance Festival has grown into a 100-acre theme park just south of Atlanta. This 16th century village contains castles, cottages and pubs, as well as entertainment spaces. The festival is known for its collection of people-powered rides—including a carousel—and games of skill, as well as three full combat jousts in the King's Tournament Arena, which take place daily.

Children's entertainment includes several popular stage shows, including the "Cirque du Todd" juggling and balancing show; the "Barely Balanced" acrobats; and the birds of prey show. In addition to a petting farm and maze, there is a children's play area with rides and games. 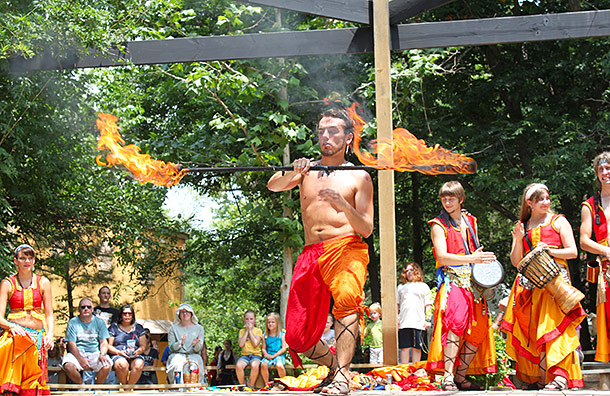 The state of Oklahoma's largest entertainment event is the annual Renaissance Festival, held in a 60-acre wooded theme park called the Castle of Muskogee. The festival takes place in the Elizabethan village of Castleton, on the castle grounds that connect the tournament and woodlands areas with the Village Center, the Celtic Quarter and other enclaves. Each area contains its own entertainment offerings, food merchants and vendors.

Shows are continuously running on 15 stages, with performances including a children's knighting ceremony, magicians, jugglers, musicians, dancers, acrobats and jousters. The Children"s Realm is a dedicated area with games, hands-on demonstrations and activities, including the Queen's Quest. Kids are welcome at separately priced meal events, including the Queen's Tea, Royal Luncheon and Pirate's Feast. 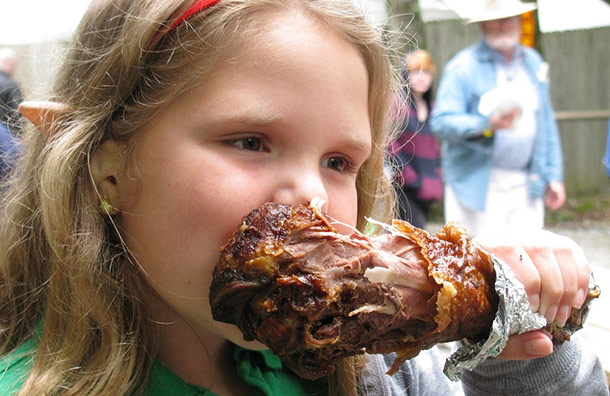 Every spring, the Village of Covington Glen near Nashville becomes a bustling Renaissance scene. At the center is Castle Gwynn, a full-size replica of a 12th century Welsh border castle with two five-story towers. Here, the year is 1584 and artisans and performers have come to impress Queen Elizabeth with jousting tournaments and human chess matches.

In addition to tours of the castle, families will find other highlights including several stages of entertainment and roving musicians, camel rides, and more than 60 man-powered rides.

There are games and rides for children, as well as shows featuring birds of prey, jugglers, comedians, pirates and more. Kids' activities also include a children's knighting ceremony, costume contest, arts and crafts area, and a visit from Robin Hood and Maid Marian, who involve the kids in an interactive stage performance. 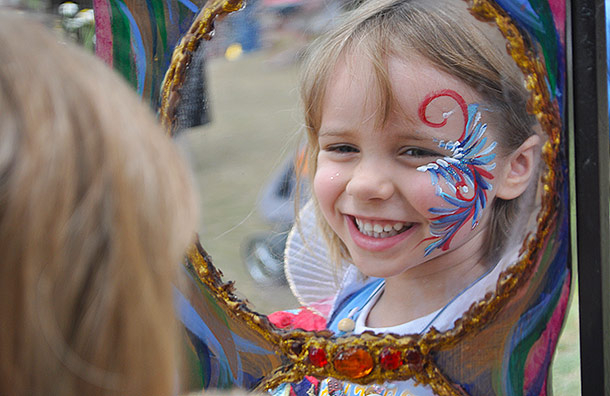 For Ren Fair fans in northern Illinois and southern Wisconsin, the Bristol Renaissance Faire recreates a summer day in 1574 when Queen Elizabeth visits the hamlet of Bristol. There are 16 stages of entertainment, nearly 200 artisans and crafters, games, rides, food, music and dancing. One of the most popular offerings is the live action fantasy-play game, RenQuest, an interactive, theatrical gaming experience in which players complete quests while honing skills and defeating evil villains. The 30-minute Kids Quests give 5- to 11-year-olds their own age-appropriate version.

Other kid-inspired experiences include more than 30 games and rides, magic shows, storytelling, tea parties, pike drills, toy ship sailing on Mouseboro Pond and Bristol's Kids Kingdom, a playground with a pirate ship, giant sandbox, crafts and its own theater. Queen Elizabeth shows up to dub all children lords and ladies. 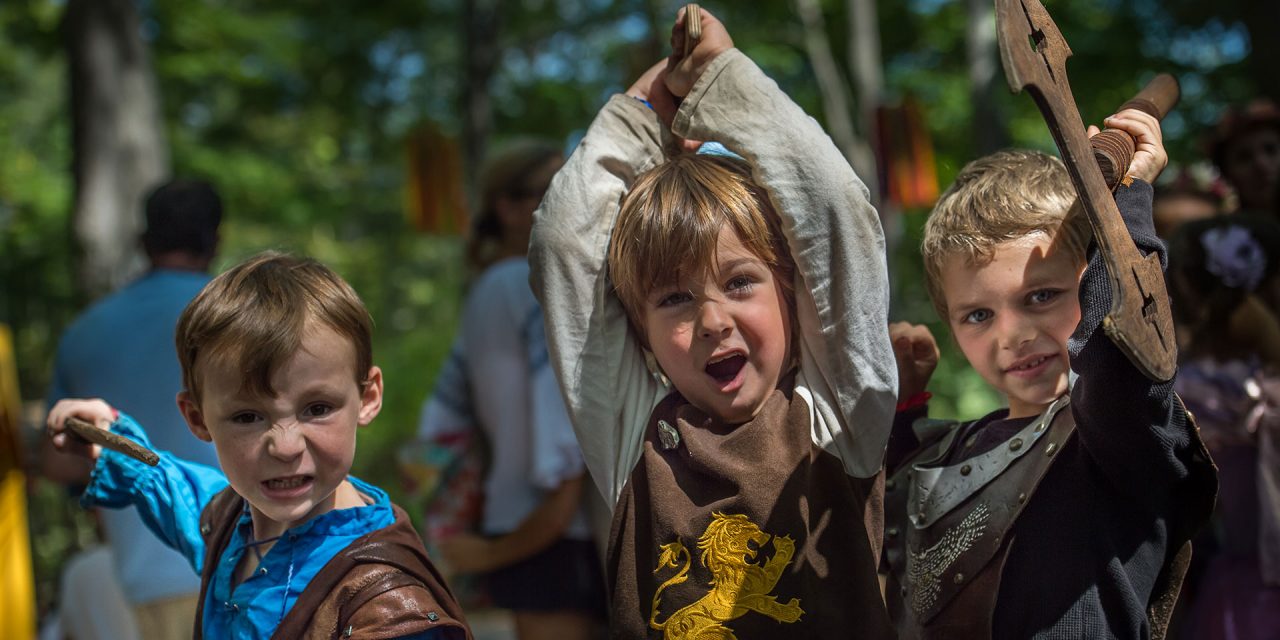 New York's fair may take place in the Hudson River Valley, but the atmosphere is definitely Elizabethan England, complete with 16th century games, rides, arts, crafts, food, music and dancing. The setting is Sterling Forest, a wooded village of permanent structures connected by pathways and bridges.

Your admission covers all of the day's live entertainment, in many genres that you can only enjoy at this type of event, such as jousting by knights on horses and living chess matches between Robin Hood's Merry Band and the Sheriff of Nottingham's crew. There are several stages and performance spaces for magicians, comedy troupes, storytellers, birds of prey demonstrations, rope-walkers, aerial acrobats and more.

Kids' programs include the day-long interactive adventure and the Enchanted Forest, where you'll encounter a faerie coven communicating with each other in their own language. 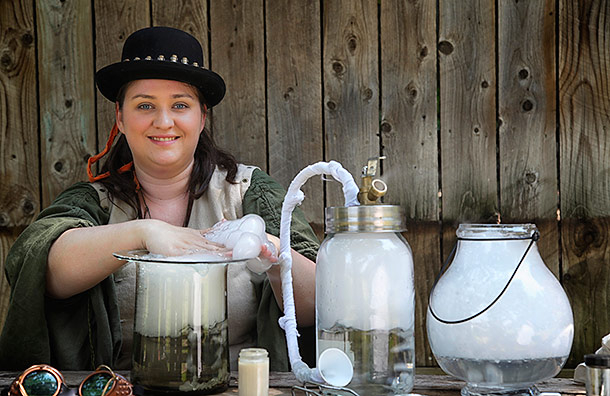 In Shakopee, Minnesota—close to Minneapolis—the long-standing Minnesota Renaissance Festival is celebrating its 48th season in 2018. In addition to the themed weekend events, tournament jousting, and daily parade, you'll find plenty of entertainment on 16 stages with simultaneous shows, from tightrope walkers to the Puppet Troupe and the Wacky Chickens comedy show. You can also walk through wooded Fairywing Forest to visit the fairy queen, or meet mermaids in Mermaid Cove.

This festival is a bargain, especially for families, as it promises 50 free activities suited for kids. Several of these are fun crafts to create fairy wands or pirate hats. They can also learn how to be a juggling master, take combat training, go on a scavenger hunt or visit the reptile petting zoo. Wearing costumes is encouraged, and a costume contest takes place first thing each morning. The first prize is free festival admission that day. 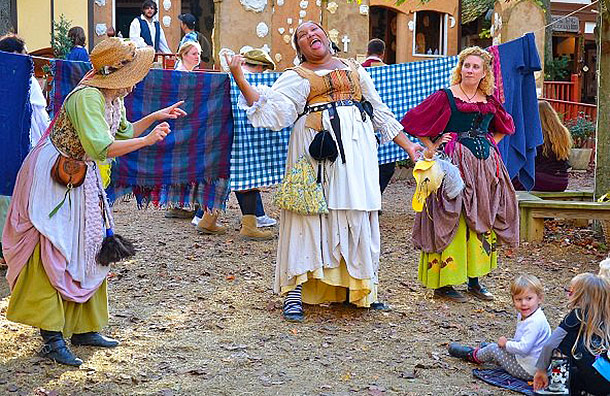 For more than 30 years, the Maryland Renaissance Festival in Annapolis, Maryland, has recreated 16th century England in a setting called Revel Grove. Pathways connect areas such as Valley Meade, Meadow Lane and King's Field. All performers and artisans act as a character that would have lived during the time of Henry VIII. The storyline is played by characters who completely improvise in the pathways and in the various Royal Court shows scheduled throughout the day. 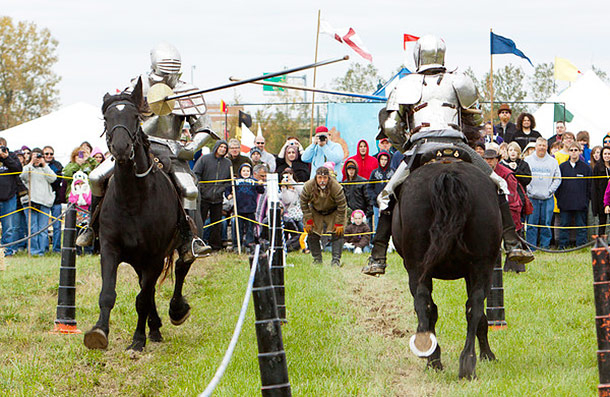 A smaller, shorter, and younger Renaissance festival takes place in Fishers, Indiana, a suburb of Indianapolis, but it's gained a lot of momentum over the past few years, especially among families.

To promote the bond between Fishers and its sister city of Billericay, England, the two-day Faire recreates the shire of Billericay Village, circa 1579, on the day of a visit from Queen Elizabeth. In preparation for her arrival, the town celebrates with music, dancing, shows, parades, games, food and demonstrations from more than 50 artisans and vendors.

Reenactments of period events—featuring hundreds of characters in period costumes—include knighting and wedding ceremonies, as well as jousting and dance performances. Specifically for kids, there are free games, puppet shows, a cast parade and the Faerie Glade, where you can catch a show at the Faerie Tale Theatre, walk the Faerie Path or picnic with fairies in the Glen of the Faire Folk.