An out of this world breakfast buffet, beautiful pool floating in Lake Como and incredible views at every turn make this five star, luxury hotel one of the best in all of Italy. With three onsite pools, beautiful gardens to explore, a delicious pizzeria and romantic wine bar among the hotel’s offerings, it’d be easy to stay put. But you’re perfectly placed here, too, roughly mid-lake, for exploring everything in the area.

Grand hotel tremezzo in lake como is a piece of art. It was a palace & then converted into hotel. Staff are very friendly & helpful. Breakfast buffet is variable & suits all people. The view from the room was amazing. From there fairy acn be taken to bellagio & verrena islands. Some other tours like hollywood tour is also available. Stay there is very relaxing

Not as Grand as it used to be

We had been so looking forward to returning to the Tremezzo after seven years, but was sadly disappointed to find it had changed, and not for the better. The staff seemed without proper management, with the exception of the parking crew (Louis etc.) & Manon, whose exceptional service and cheerful disposition was outstanding (she surely deserves a promotion), but otherwise, some of the waiting staff particularly were surly and without genuine warmth. We sorely missed Dario, the former Maitre'D, who has sadly moved on, but whose presence made sure the restaurant ran with smooth precision and his friendly professionalism was infectious and was reflected in the staff. The room (Lake View Deluxe) was in effect a small suite, with dual aspect being on the corner, a spacious and beautiful bathroom, a wardrobe each, comfy bed, and was a delight. We had a table booked for La Terrazza restaurant for a birthday/anniversary (of which they knew), but no effort was made to celebrate this. A lacklustre meal followed (unworthy of Michellin and a purported 5* restaurant, average wines, zero ambience, and waiting staff that seemed disinterested and mechanical. A total reversal of what we experienced before, and in line with other guests' experiences of woe and worse, it really was a shame. We would not have dined here again had we been staying longer, something that was repeated to us by others. The breakfast here is legendary, well it was, it seems average now, choice is good but now geared towards the American tourist (of which there were many!), the only buffet eggs available were scrambled, unlike before where a chef in the restaurant cooked your eggs any which way you wanted). Now, it's a special order of €17 for anything other, audacious when you are paying in excess of £1000 per night! The wine bar was far better, with knowledgeable and enthusiastic staff, good wine & food, great atmosphere. The spa was average, costly treatments that were not up to standard, let alone having to pay excessively for! The indoor pool was okay, with hot tub outside, but all the lounging chairs were taken so there was nowhere to sit. We asked for our car keys to retrieve something we had left in there, and was told they would be sent to our room (why they couldn't be fetched or brought to the reception was beyond us). An hour later, they still hadn't arrived, so we phoned down to enquire. 30 minutes later, someone bought us up a can opener(!!), so we visited reception and told them of the incident, which amused them no end. It did not amuse us however. We ended up having to go downstairs and get the keys ourselves, some 2 hours after first asking for them. I do hope the owners of the Tremezzo, such an illustrious hotel, listen carefully to guests' comments and get things in order, to make the hotel worthy of it's 5* it purports to have. It really is only worth 4* at best. 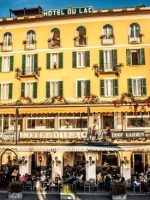 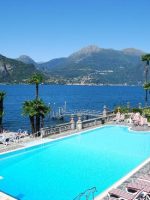 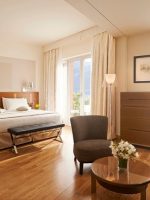