Grand Sunset Princess is an ideal resort for families who want to be close to Playa del Carmen. Suites feature elegant decor with balconies or terraces. With seven restaurants, even the pickiest eater in the family will be satisfied. Kids will especially love the onsite ice cream parlor. Grand Sunset offers a complimentary shuttle to Playa del Carmen, which has many other eateries and bistros.

Grand Sunset has a myriad of family-friendly amenities. A monstrous 13 swimming pools cover the premises. Four of these pools are just for kids. Children under 12 can also enjoy the Mini Club, which plans daily and nightly activities. Teens also have their own club — Funtastic Teen’s Club — which offers age-appropriate activities like video games and sports. Together, families can enjoy the beach with water-sports equipment. The “Princess Theater” also presents daytime and nightly entertainment.

This resort was really nice. They had a great pool with options for party of relaxing. The bed in our room was horrible but the room it self was always nice and clean. The restaurants were hard to find availability but the food was really good. I would go back here but upgrade to a swim out room.

Would come back again

Overall we had a great stay at this resort. There are a few cons but nothing to ruin the trip over.

From the main building to the beach is about 10 mins at a leisurely pace. Not an issue for us but some might have a problem with it. Our room was very close to the main building which I think is the way to go. That’s where most of the restaurants and bars are. I would rather walk to the beach than walk to dinner or the lobby at night (which is when it seemed to always rain).

I’ve now been to both small resorts and a big one like this and I’m still not sure which I prefer. With a big resort there’s much more to do and explore but you’ll never get around to it all in one week anyways so it’s almost like it’s water space. I prefer the service at small resorts because you’ll always be dealing with the same staff members so service is more personalized. The staff at this resort is good but we barely saw the same person more than a couple times. It’s the same idea with making friends, you may find a good group to hang out with one day but won’t be able to find them again for the rest of your trip. None of these aspects are necessarily good or bad, but they’re based on your preferences.

The food is not bad, I think the buffet was probably better than the a la cartes to be honest. The Japanese cooking show was great, that would be the one restaurant I’d recommend you don’t miss. Breakfast was a little repetitive but there’s only so much you can do with that. Don’t miss out on the ice cream parlor! It was almost empty when we went. It’s inside the family club building.

The beach was disappointing to me. The entrance to the beach is rocky in some places with isn’t the worst thing in the world but it’s something to consider. I recommend entering near the yellow lifeguard stand. The water was warm but it stunk and wasn’t that picturesque Caribbean turquoise. Not the resorts fault but it’s something to consider. The seaweed on the beach is cleaned up every morning but it still lingers in the water. This was probably the biggest gripe I had with this place but again it’s not the resorts fault directly.

The wildlife on the resort is another pro/con. The coatis are relentless and fearless (but harmless). We saw a lot of families having troubles fending them off but if you don’t have a 3 course meal from your lounger you’ll be fine. We also saw monkeys, cats, iguanas but didn’t catch a glimpse of the crocs but they’re definitely there.

The entertainment staff was good and the nightly entertainment was good overall as well. The rooms were extremely clean. Drink service was good basically everywhere you go. Drinks were strong enough for me (pro tip: complaining about weak drinks? Ask for more alcohol... they won’t say no. I can’t believe this needs to be said). 5th ave is about 20 mins away and costs $20usd each way in a taxi or 50 pesos each way if you take the shuttle at set times.

Overall I enjoyed my time at this resort and would come back for the right price. The biggest negative for me was the beach but that’s just me being picky really. The large resort size is both a pro and con but that depends on what you’re looking for out of your trip. Thanks for the great week! 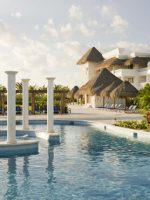 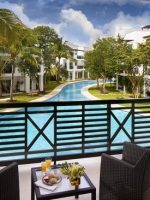 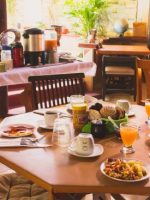 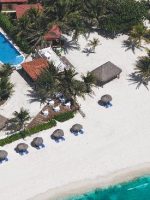 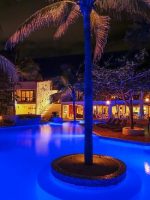 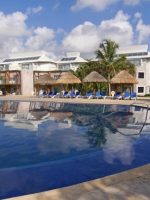