Located about 20 minutes from downtown Winnipeg, this airport hotel features a pretty and modern dÃ©cor, and in no way does it feel like a stereotypical airport hotel. This is an ideal place to stay for families who are seeking a midway point after a long flight. Guests can easily walk across the street from the airport and arrive at the hotel in minutes. The onsite restaurant is a great place to grab some dinner and the adults can enjoy a cocktail at the bar lounge. Free Wi-Fi makes it convenient for families to stay connected, and each guestroom is equipped with an iPad so games and movies await!

There are 101 guestrooms and suites at this hotel, all with sound-proof windows and blackout shades so there is no disruption from the airport. The rooms are definitely quiet, so light sleepers will not be interrupted.

Each room also features a doorbell. The hotel staff will always ring the doorbell instead of knocking, but it is also used instead of a "do not disturb" sign. A doorbell light on the outside of the room flashes green when the guest leaves the room and it is time for the room to be cleaned. Or it turns red when the guests are inside the room and do not wish to be interrupted.

Cribs, cots and complimentary Wi-Fi is available in the rooms.

The guestrooms feature two queens or one king bed, an oversized mini-fridge, Keurig coffee machine, bottled water and a flat-screen television. There is also an iPad connected to the television, which allows guests to log into their own Netflix channel. Electrical outlets can be found by the bed.

A shower/tub combination can be found in the bathrooms of two-queen bedrooms, but a standup shower is offered in king rooms. Connecting rooms are not available.

Guests enter into a foyer with the suites and then into a separate living room area that features a sleeper sofa and dining table with seating for four. There is a large countertop area with seating and two refrigerators. Two flat-screen televisions and two iPads can also be found. A king bed is featured in the bedroom area and electrical outlets can be found by the bed. Both a standup shower and tub can be found in the large bathroom. The suites can connect to a second guestroom, as well.

a good first night in and last night out

How convenient could a hotel be. Litterally a two minute walk from the airport. Very clean, nice rooms, comfortable beds and good food. It could not have been a better place to spend our first and last nights in Canada.

Stopped here on our way to Churchill. It is a nice hotel. Front desk was very accommodating. Their bar and menu are great. The food was very good. The rooms are very comfortable and have everything you need.

There aren't any specific family activities or amenities at this hotel.

The onsite restaurant is open for lunch and dinner and features local ingredients. Some menu items include pasta, pizza, salads, burgers, tapas, ribeye and chicken.

While The Grand does not offer breakfast onsite, breakfast is available at its sister hotel Four Points by Sheraton, which is located next to The Grand. A breakfast voucher is provided to guests.

Parking
Parking is available onsite for an additional cost.

Fitness Center
A fitness center with cardio machines and weights is available to guests and gym towels are provided.

This hotel is busy almost year-round, and is often utilized as a stopping point for guests who may be traveling north to Churchill.

Winnipeg winters run from about October through April and tend to be on the cold side. Summer temperatures range between 65 and 85 degrees.

The Winnipeg James Armstrong Richardson International Airport is situated across the street from this hotel, and guests can easily walk from the airport to the hotel. No shuttle or vehicle is needed.

A vehicle is needed to explore downtown Winnipeg; rental options are available at the airport.

Lounge
The bar lounge situated at the onsite restaurant, The Blue Marble, is a great spot for the adults to unwind with a cocktail. Specialty drinks and a late-night bar menu are available until midnight. 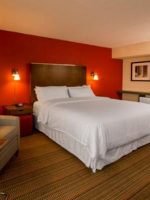 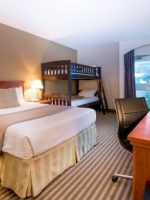 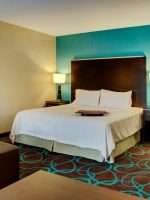 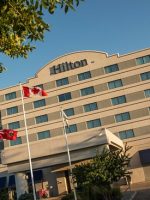 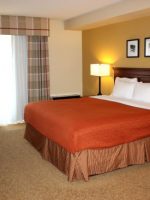