The Hampton Inn by Hilton Halifax Downtown is a reliable option for families looking for a hotel in downtown Halifax, Nova Scotia. The hotel offers complimentary breakfast, an indoor swimming pool, onsite market, and free Wi-Fi.

Quietest hotel I've ever stayed at in Halifax

This was the quietest hotel I've ever stayed at in Halifax and I was very impressed with the service. The breakfast was very good and there was an executive staff member making sure that everyone was finding everything they needed. He helped me find the yogurt which was the brand of Greek yogurt I like because it is higher in protein and lower in sugar than some of the others. The location was very convenient and the staff were always very accommodating. My only tiny issue was finding the parking lot the first time because there was another hotel name on top of this one at the entrance of the parking lot so I drove by it the first time and then went on a mini-tour of Halifax while I tried to find my way back. However, I know where it is now, so that won't be a problem the next time I stay because I'm sure I will be back.

I just spent 6 nights in the Hampton Halifax Downtown while on business. The room was great, bright and the window could open if required, loads of space and everything that I needed was provided - on Day one. Unfortunately, the coffee that I used each morning was not replaced, so I was down to decaffeinated by Day 3! Spare toilet paper was not replaced for two days.

My greatest beef though was the use of plastic knives, forks and spoons and paper plates at breakfast! In this day and age, I could not believe it! I travel a lot and do not always stay in nice hotels, but have never been given disposable tableware before! The food was ok, with a fair amount of choice but eating it off a paper plate, drinking coffee from a paper cup was totally unpleasant. I paid over $1000 for my stay and feel totally ripped off just because of this. I spoke to the General Manager about it, and he agreed it is awful, but apparently it is the Hampton group's policy and there is nothing that can be done about it. As an environmental scientist, I can tell you this is definitely not an environmentally friendly alternative, despite what they say about it all being biodegradable and recyclable. Until this policy changes, I would definitely not stay at a Hampton hotel again and do certainly not recommend the Halifax Downton solely based on this. There are lots of other hotels in Halifax and I would suggest using one of them instead 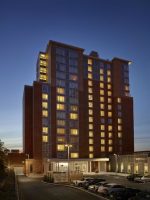 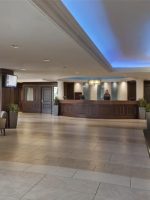 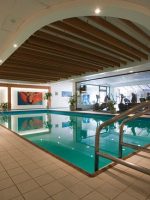 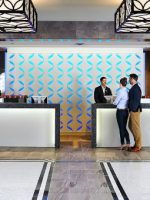 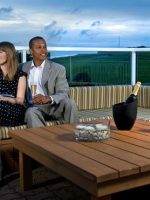