An onsite restaurant (plus room service) with a children’s menu and high chairs? Check. Cribs and comfortable accommodations? Check. Pool? You got it. Popular Toronto attractions and activities nearby? There are plenty.

Our verdict? Hilton Garden Inn Toronto Downtown is an ideal spot for families to stay when visiting Toronto. The hotel doesn’t offer fancy frills, but it offers everything you need — all at an affordable rate — and that in itself speaks volumes.

The rooms at Hilton Garden Inn Toronto Downtown are one step away from luxury accommodations. They're modern, clean, spacious and most importantly, comfortable. You'll enjoy a peaceful night's sleep in a Garden Sleep System bed, with 250 thread count sheets, down comforters and down and feather pillows), and relax in an ergonomic chair at your room's large desk.

For families, the rooms with two queen beds are a no-brainer; they're the largest units. Another option is the 1 King Bed with Sofabed unit.

If you're traveling with an infant or young child, the 1 King Bed, 1 King Bed Whirlpool and 1 King Bed with Spa Shower units will accommodate your small family. Cribs and rollaway beds are available upon request, and can be used in all rooms.

We love the Hilton Garden Inn downtown Toronto. The location to venues is great (for us). Rooms are clean, beds are comfortable, and best of all it is affordable for Toronto!!!
We also enjoy the hot tub and pool after doing lots of walking downtown.
Thanks!!

I had a great night at the Hilton garden hotel. Restaurant were near by, the hotel itself had a wide selection to choose from. I love the soap in the bathroom. I enjoyed the seating area so I didn’t have to just be on the bed.

Hilton Garden Inn Toronto Downtown has a small indoor pool. Beyond that, there's not much for kids in the way of activities, but that's okay; you're within close proximity of several tourist attractions, including the CN Tower. Go out and explore!

The Marquis Bistro
Located on the second floor, The Marquis Bistro serves breakfast and dinner in a casually chic atmosphere. Breakfast is plentiful, with eggs, omelets, pancakes, French toast, waffles, pastries, fruit, yogurt, oatmeal, assorted juices and coffee. Dinner includes salads, sandwiches, steak, chicken and fish, along with a children's menu of chicken tenders, grilled cheese sandwiches and the like. High chairs are available upon request.

Pavilion Pantry
Located in the lobby and open 24 hours a day, the Pavilion Pantry offers snacks, cold drinks, microwave meals (for your in-room microwave) and sundries. You can pay for your purchase with cash or a card, or simply have it billed to your room.

Room Service
Got cranky kids or simply need a night to relax? Order from the in-room dining menu at The Marquis Bistro. In-room dining is available from 5 p.m. to 10 p.m.

All About the Extras
Complimentary wired and wireless Internet is available throughout the hotel.

Other amenities include a fitness center, ATM and coin-operated laundry machines. If you need to print tickets, head to the business center, where you'll enjoy complimentary printing and photo copying services.

ADA accommodations and amenities are available throughout the hotel.

The hotel doesn't provide babysitting services, but is happy to suggest local providers.

The Art of Smart Timing
Summer is high season in Toronto, so expect to pay the highest hotel rates in June, July and August. March through May and September are great times to visit; you'll beat most of the crowds and enjoy slightly lower hotel rates. For the best deals, visit Hilton Garden Inn Toronto Downtown during the winter.

Getting There
Hilton Garden Inn Toronto Downtown is about a 25-minute drive from Toronto Pearson International Airport. You can rent a car at the airport, though we suggest you utilize the Toronto Airport Express, a more cost-effective option that drops you off a few blocks from the hotel. If you're able, fly in and out of Billy Bishop Toronto City Airport. It's a small airport with complimentary shuttle buses into and out of the city.

If you'll be driving a car, valet parking is available for a fee per night.

Getting Around
Toronto is accessible by bus, subway and taxi. You can also drive, but we suggest public transportation.

For Mom and Dad
The Marquis Bistro has a lounge that's simple, yet fulfilling for a quiet night away from the kids.

If you'd like to enjoy a night out in the city, head to Wayne Gretzky's Toronto (a block from the hotel) for drinks before dinner at one of Queen Street's (also near the hotel) many restaurants. 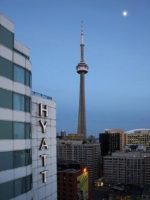 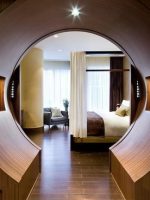 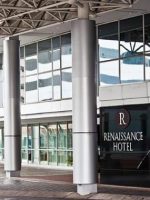 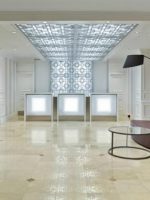