Families looking to visit beautiful Sacramento should consider the Holiday Inn Express Sacramento Airport Natomas. This hotel is conveniently located just under five minutes away from Sacramento Airport, making your travel day as easy as possible. Make sure to check out the local dining, shopping and entertainment options California’s capital has to offer. At the hotel, you’ll be greeted by friendly and helpful staff. A 24-hour airport shuttle will save you time and money. You’ll be able to start each day with a free breakfast for the entire family. Free Wi-Fi access is given to all guests, making it easy to stay connected and entertained. The outdoor pool gives your family a place to relax and splash together. The fitness and health center is a big hit with guests who brought their workout goals with them.

Very poor experience. I stayed her for 3 nights for a conference, but had accidentally booked it for 4 nights. I realized my mistake and attempted to modify it online right away, but was unable to. I contacted the hotel staff and the woman on the phone told me that it wasn't a problem and she would make the adjustments. However, she called me back later and said that because I made the advanced purchase it would not let her cancel the room. I told her I do not want to cancel all the nights only one of the nights. She was kind enough but suggested I speak with the manager, Meghan Schaefer. I left her a message but did not hear anything back. Two days later I left her another message, again explaining the problem and still heard nothing back. I finally showed up and told the staff member what had happened and that I had not heard back from Meghan after several phone calls. He went back to get her, and she refused to come out! He said she was "busy, but that she got my phone calls." Seriously, you're too busy to return my phone calls or see me face to face??? What could be more important than speaking to a guest?! If you simply cannot do it, then tell me that, but at least give me that courtesy rather than ignoring me. On another note, this is a very OLD hotel. Don't expect anything updated. The carpet looks like it's 100 years old. My shower curtain smelled of mildew, and there are only 3 floors, but if you're on the 3rd floor don't be in a hurry to get anywhere because it is old and outdated. I'm scheduled for the second half of this conference in November, and I will not be staying here, but this is without a doubt because of the manager more than anything else. Do yourself a favor a take your business to Homewood Suites right next door or Hampton Inn & Suites across the street.

When I checked into the property using my points I had a bit of a hard time with the agent. After booking 2 rooms as a Spire Elite Member I requested both rooms be 2 beds, Megan told me that as I had booked online (which is the only way to book point nights) that she could not accommodate my request. She informed me that I would need to call IHG to get moved, this was an inconvenience since there was a wedding I needed to attend that evening. Finally after being on the phone with IHG for almost an hour I was able to move rooms. This I felt was extremely unprofessional as an IHG member, I know that sometimes requests cannot be fulfilled, but I was offered no explanation, and when I asked for a manager she informed me that there was none on duty until Monday. This was Saturday. The rest of my stay was great, and I would recommend this hotel to others. I felt this interaction need to be brought to her superiors, if this is the policy then that should've been stated, not "Oh. I can't do that." 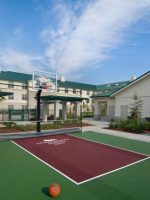 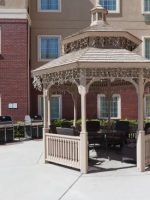 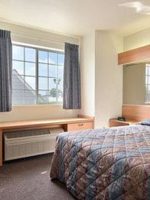 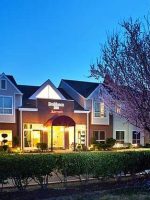