Located in the downtown area, the 122 guestrooms feature a refrigerator, microwave and free Wi-Fi. There is an outdoor pool and the onsite restaurant and cafe offering breakfast, lunch and dinner, and kids eat free at the Holiday Inn.

Staying on business, so having terribly unreliable internet was a big turn off. When I first step into room I was told they were restarting router. So I waited, got connected about 15 min later, but a few hrs later, it was down again. That's probably my biggest complaint. Only other issue was kinda of thin walls. I had a loud neighbor, but it might be thin walls. They weren't screaming, just very talkative at past 11p. So my rating is not based on that but the unreliable internet which affected my ability to work in the room.

Very nice staff, clean and comfortable room that is a good value close to downtown. Surroundings are kind of dumpy but it is on the main drag to downtown and a shuttle will take you down and pick you up. Great eateries downtown definitely worth visiting. One quibble: It is not really "downtown" - took me 20 minutes or more to walk back, but the price is right - and for most folks the free shuttle is the best option. 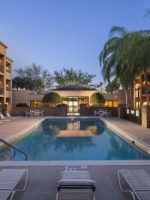 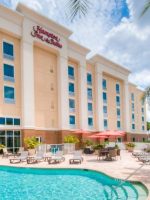