Situated in an excellent location near popular attractions, the Holiday Inn Mobile West I-10 offers guests clean and comfortable family-sized rooms. Points of interest located within driving distance are the Museum of Mobile, the USS Alabama Battleship Memorial Park and the Mobile Civic Center. Families can reserve Double Rooms that hold a maximum of four guests. Other options for families include extra beds, cribs and adjoining rooms. The Holiday Inn offers guests complimentary Wi-Fi services and access to the hotel’s outdoor swimming pool. The 5th Avenue Lounge is located onsite and serves breakfast and dinner.

Very nice front desk. But their wAs was huge bug in my room. They moved me into a new room but I could barley sleep thinking about it. The hotel was supposed to be updated but it was not. More like a motel the hotel.

To begin with, this is the first survey I have ever completed. I stay with Holiday Inns often all over the states for work with Norfolk Southern (MSI Lodging) This trip was for vacation. My family and I purchased a package that included breakfast and transportation to and from the hotel to the Carnival cruise port. The room was average, not as nice as most Holiday Inns, but it was very clean. The free breakfast that was offered with our package wasn't even edible. We ended up going across the street to Waffle House. The pancake mix came out separated, the biscuits were hard as rocks, the carton milk wasn't cold, the coffee was too strong to drink. To say the least it wasn't good. We had an appointment scheduled at 11:30 to be shuttled to the cruise port. At 12:45, after complaining to the front desk they decided to run another van to take us (we had to sit on each other's laps b/c of lack of space), with that being said we were still late for our check in. When we arrived back to port from our trip we were the first off the boat along with one other couple anticipating our shuttle. It is not there so we call the number on the paper and they proceed to tell us and the other couple that called that it would be 45 minutes to an hour before they picked us up because they were on the way to the airport!!! Now the paper does say you may have to wait 45-60 minutes for your shuttle, but we thought it would be because the shuttles were full and you have to wait for the next one, not that they would be an hour late off the start. Why would you not have a shuttle there waiting on the boat to dock. We have used this service at several different hotels and NEVER have we had anything like this happen. We ended up paying 48.00 for a taxi van to take us to the hotel. To add insult to injury I walked into the hotel to talk to someone about it. Patrick was working the front desk. I started off as nice as I could, saying I know it wasn't his fault. Saying someone told us we would have to wait an hour because holiday inns shuttle was at the airport. He interrupted me to tell me that's not what he said and I wasn't the only person that paid for a shuttle. The conversation esculated from there with him being very rude and unprofessional. Overall what it appears is they double book and run shuttles from the airport and the cruise port with one shuttle when they have another one not being used. Needless to say I am very disappointed with the over all stay and with Patrick who was representing Holiday Inn. I have always spoke and thought highly of IHG hotels, as a matter of fact, I always book my guys rooms with your hotels, but not only will I not recommend this hotel for anyone. 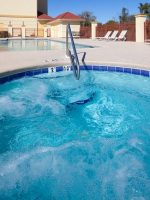 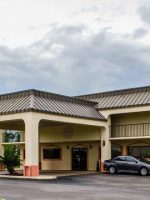 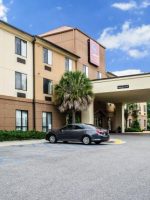 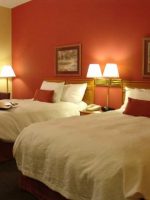