Homewood Suites by Hilton Albuquerque Journal Center is a nice spot for families with children to go. This hotel is perfect if you’re visiting the American International Rattlesnake Museum, Albuquerque Biological Park and Albuquerque Aquarium. Some other nearby attractions include the Rainbow Ryders and Indian Pueblo Cultural Center. This hotel has 63 rooms. Each room includes a kitchenette and free high-speed Internet. This Albuquerque hotel also has a fitness center and swimming pool. Durans Station, El Pinto and Azuma Sushi Teppan are all family-friendly restaurants that are reputable and are close to the hotel.

This hotel has been around for quite a while based on the different online reviews. However it has recently gone through a major renovation including what I believe is a addition of a new building/wing.

Location
The hotel is located north of Albuquerque, about 20-25 mins drive from Sunport airport (on a good day) and about 10-15 mins from downtown ABQ. The hotel is easily accessible to the I-25 and the Paseo Del Norte Blvd. Around the hotel there are not much, except 2 chain restaurants, Denny's and Crocker Barrel. There are a couple of shopping center about 5 mins by car. In the hotel I did see that there was a complimentary shuttle (weekends only if I remember correctly) to a certain casino/resort (can't remember which one).

The neighbourhood seems relatively safe and it is mainly a residential area with some commercial buildings in the area.

For me - the location was good as I was heading towards Rio Rancho, so I was never really caught up in either morning or evening traffic.

Check In
I had to drop by the front desk since I could not check-in online. Arrived just before 1pm at the hotel and I was lucky to have been able to get a room. I was initially allocated a room on the 1st/ground floor, but requested for a higher floor and one on the 2nd floor was allocated (the property has only 3 floors).

Found out later that my HHonors number was not sticking to the reservation so that explains why I could not do an online check-in. However during the whole stay, the digital key would never arrive despite trying a few times to resend it.

Room
My room was in the new building/wing. It was indeed a much more spacious suite compare to other previous Homewood Suites that I've stayed before. The living and kitchen area was in one room, while the bedroom and bathroom located in a separate room with each being spacious.

View was towards an empty lot (growing with wild grass/plants) and beyond that the residential area and the city lights and mountains. This did ensure minimal noise from the outside.

The kitchennette was sufficiently well equiped and clearly it was quite new including the utensils. Only minor complain would be the sink which was actually strangely a mini sink which did make washing a small challenge (water would get all over), but other than that, it was your typical Homewood Suite kitchenette.

The bed was comfortable, but I suspect that it was not a new mattrass as there was already moulded from usage, though for me it was still ok.

There was the usual tea/coffee making facility, iron and hair dryer provided. The wardrobe space was the usual size and the rest of the bathroom, the usual layout. There was a working desk in the bedroom area and what I found very useful was international type adapter which to me was very unsual for hotels in the US. [I believe that they are rolling out these special desk lamps which comes with 2 of these adapters as it's now the 3rd time I've noticed them at US hotels].

There were 2 TV's provided, one in the living room area and the other in the bedroom. Another small complain was that the TV channels was weirdly programmed - did take me some time to figure out the order of the different channels, especially the HD ones. The AC unit was the usual floor/wall unit - which as usual quite loud, but luckily since outside was cold, I did not need to use it too often and with just the ceiling fan, it was sufficient.

The water temperature and shower pressure was good with toiletries as usual was from Neutrogena. Internet speed was ok, I tried both the usual and premium internet - with the premium just slightly better from speed point of view.

Housekeeping was in general ok. Only a small note, which I would not put it down to housekeeping, was that on 2 occasion, I did twice encounter seeing pest in the room, the first time I managed to kill it, the 2nd time, it managed to slip pass me.

Dining
The breakfast offerings was the usual Homewood Suite options.

As for the social evening offerings, I would say that it was most probably the minimal requirements that was offered. Every day there would always be a salad and the hot dish option would be changed - since I was here the last and start of the month, during my 2 weeks stay, there was no repeat of options. As from quality point of view, some days it was ok, but other days it would be actually quite bad. For example, they had an Asian night (called Pho Day), and for the hot options, the spring rolls offered, were way too salty and the skin just soggy (instead of crispy) and the noodles were basically just soaked in a pot of soy sauce - I normally would try not to waste food, but these were just too bad for taste (and health as it was basically eating a pot of salt). I just wish that they would think a step further if and stick to items that are simple. I can understand that it is quite a challenge for this property due to the limited kitchen equipment available to prepare the food, therefore I cannot understand why go for difficult food or one that would not work based on the associate knowledge of making it. This is also the first property where I did not see much offerings from drinks point of view besides water and some cordial type of drinks.

I also found the staff in charge of the evening offerings to not really bothered in refilling items. I can understand they not wanting to waste food - since there were really just a very small number of people participating in them, but at least do the minimal to keep items top up to the minimal.

The other thing which did disturb me was the usage of disposable utensils. I know this is more of a generic issue, but seems that this property encouraged it's guest to use the disposable utensils rather than the proper ones - always displaying it as the easiest to reach spot - not sure if it is because of lack of dish washer or staff just lazy to wash. On the other hand, of course it is the guests themselves that should make the choice and here it was clearly most of them just grabbed the disposable utensils.

From dining point of view, still top of my list is the Homewood Suite at Albany, NY airport where the evening social has got to be one of the best within the chain.

Service
I did read in some online reviews that staff were in general bad, for me, I found all front desk associate to have been friendly and helpful. Breakfast/Social Evening staff were more of I come, I do what I need to do and that's it - average.

Amenities
As for the other facilities at the hotel, the gym was well equipped - it was moved to the new wing - and spacious.

The only facility which seemed to still not be completed is the swimming pool area - from the outside it seems to be still under renovation - not sure until when as I did not bother to enquire about it. Furthermore, I did not see any hot tub. Not sure what the plan is for this facility as it is located next to the old gym - so hopefully the plan is to extend it to that area and include a hot tub.

Parking space availability was sufficient in my opinion, although I am not sure how occupied the hotel was - at times it seems contradicting on the number of cars vs guests during breakfast/evening social. However I believe with the new wing and added parking space, some of the previous online complain about lack of parking should be solved.

Overall
All in all, the property after renovation does look refresh and up to the standards expected of the Homewood Suite brand. Only item to improve would be the pool area - which seems to be the only part of the property that still needs to be completed. Other that, if I had to be in the area for more than 2-3 days, I would certainly pick this property again as my extended stay place to be.

The staff is helpful and friendly. They were extremely accommodating allowing me to check in hours early to prepare for my cancer treatments. The rooms were clean and beds were comfy. There is a Denny"s and Cracker Barrel within a few 100 feet of the hotel. There is also cool Brewery within walking distance. 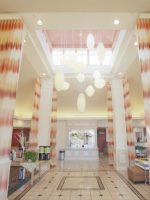 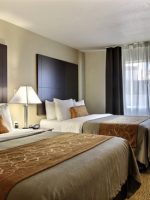 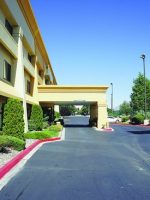 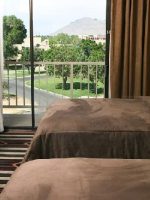