Don’t envision bare rooms and early morning meditation sessions: although this hotel is set on the grounds of a former monastery (which dates back to 1142), you won’t find much asceticism at the charming 4-star property. The bright, open rooms feature modern furniture, minibars, coffeemakers, flat-screen televisions, and free Wi-Fi. The classic family room is perfect for a family of four, with one double bed and two extra beds, split between the first level and a loft. If you’re a family of three, the classic triple room will suffice.

Rooms come with access to the free breakfast buffet, which you can enjoy in the dining area or on the terrace. The hotel’s location is ideal: it’s quiet and peaceful, but still close to the bus station and walking distance to several restaurants and attractions. Overall, Hotel Monastery is perfect for those who want comfort, beauty, and history wrapped up in one.

Most disappointing one night stay

I booked a twin room for one night to stay with my 14 yr old daughter. I advised the hotel that we would be turning up after 7pm and was told that there was a remotely managed access system to enable us to gain entry to the hotel. Note, there is no reception and no service at this hotel after 7pm!!!!

On arrival, the remote access facility did not work i.e. nobody in the responsible sister hotel answered. Were it not for the chance exit of another guest we would not have been able to gain entry.

On the evening of our arrival I attempted contact via the remote system 4 times and tried to phone the sister hotel directly six times, but there was never a response. I also emailed the hotel twice but much to my surprise I still have not received a reply containing a written apology. This was all the more problematic as we had not been given the twin room that was booked but instead a tight and most unsuitable, semi converted attic 'space' on the top floor of the hotel, nothing like the photos on the hotel website. Because the hotel is unstaffed after 7pm it wasn't possible to rectify this. I think the hotel needs to review this policy.

At least the hotel admitted this was their mistake the following morning via its helpful receptionist, but by then it was too late. This was most disappointing especially as the hotel is wonderfully located overlooking Prague and I think it might have been great to stay in were it not for the serious problems with access and the allocated room.

Key learning points, if you are going to stay here do not risk turning up after 7pm and make sure you confirm your room choice directly with the hotel before arrival.

Stepan and his team at Hotel Monastery couldn't have been more helpful and hospitable. The hotel has some great views. It is very clean and very peaceful. Too far from the "strip" for hen parties and stag parties. I'd recommend this place - it's is great value for money too - to anyone. 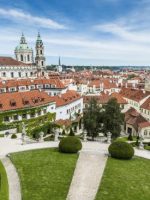 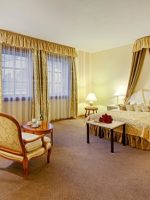 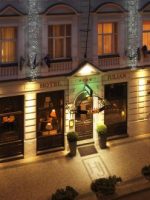