Inn by the Sea
931 Reviews
Edit

After staying a few days at the Inn by the Sea, it’s hard to imagine a better name for this luxury eco-inn on the Southern Maine coast. The natural rhythms of the ocean permeate every aspect of staying here, from the view of the waves from the broad verandah off the lobby; to the wide and sandy beach, accessible from a short walk along a boardwalk nature trail; to the many water-centric activities offered by the inn. The emphasis on the natural environment here is more than just window-dressing, however. The inn strives to incorporate ecological awareness in all aspects of the resort, including using recycled building materials in the design, a solar-heated saline pool and an LEED-certified spa. Families can teach children about environmental awareness while the inn’s many kids’ activities introduce them to the unique ecosystem of the beach and nearby salt marsh.

The inn itself consists of a main building with common area, restaurant, and spa along with one-bedroom rooms, and another 18 cottages located along the beach. All of them are amply outfitted with top-of-the-line luxury amenities that will keep mom and dad as comfortable as the kids. From the inn, a broad, lawn landscaped with indigenous trees and flower leads down to the ocean, providing ample room for kids to run around and explore the environment even as parents can keep an eye on them from the verandah. Finally, there is the beach — a crescent-shaped expanse of powdery sand that is a rarity for the rocky Maine coast. The beach itself is long and flat, with gentle tides and frequent tide pools perfect for exploring.

While the inn feels close to nature, it’s hardly far from civilization — Maine’s largest city, Portland, is an easy 15-minute drive away. Full of cultural attractions, acclaimed restaurants, and independent boutiques, along with a picturesque working waterfront, it’s a favorite among travelers to New England. Finally, as inviting as the environment is here, it’s the attentiveness of the staff that keeps families coming back. From the owners on down, the staff here is incredibly adept at handling kids, remaining unruffled at quirky requests or mischievous behavior, and taking extra care to design itineraries and activities that fit each family member’s needs and desires. Don’t be surprised if after a few days you feel your own rhythms adjusting to suit the ebb and flow of the tides.

Rooms are luxurious and comfortable, with fluffy sheets and duvets and L'Occitane bath products. Additional charges apply for extra guests over age 13 (no charge for kids 13 and under). Cribs are also available at no extra charge. For an additional fee, the innkeepers will shop ahead of time to stock the kitchen to guests' liking.

Guestrooms
The main building of the inn has 39 rooms, 14 of which are guestrooms with a fireplace and mini-fridge.

Suites
There are one-bedroom suites with a pull-out couch in the other room, perfect for families with young children. The 1,350-square-foot, two-bedroom Beach Suites feature direct ocean views, a large deck, two bathrooms, a spacious living and dining space and full kitchens, with indoor/outdoor fireplaces. For larger families, or families looking to economize by cooking some of their own meals, the inn also has 12 two-bedroom Cove Suites with a living and dining space, full kitchen, a fireplace and furnished deck.

Perfect quiet getaway. Serenity of Oceanside, while just a quick ride into Portland for top notch dining and shopping. Stayed in the cove suites and loved every minute. Beautiful updated decor with all the amenities we needed.

Second time staying at Inn By The Sea. This time we brought our dog which was a wonderful experience! The staff goes above and beyond to make sure our stay was absolutely Grand!!
Our Cove suite was absolutely fabulous and had all the amenities we wanted… Fireplace, luxurious beds, great living room and kitchen with a dining room table to play scrabble and make a jigsaw puzzle????
While we were checking out we made another reservation to check back in, in January????
We are so looking forward to staying again for another five days????
Thank you Inn By The Sea!
Audrey Donovan/Rockport MA

Kids' Programs
Inn by the Sea doesn't have a "kids camp" per se, but it does offer a wide range of family activities during summertime for families to engage in a la carte. Some allow parents to drop off kids for programs with inn staff or outside naturalists, while others are fun for the whole family to do together. Family activities begin in earnest in June, when a set weekly program ramps into gear. On Mondays, for example, a naturalist from the Cape Elizabeth Land Trust leads a beach trek to explore the coastal ecosystem in the morning, while in the afternoon the inn's sous chef leads children in creating their own healthy snacks. Other days see children's story programs, garden tours, art classes, child yoga and -- a kid favorite -- bug hunts, in which children dress up like insects before invading the gardens to catch their own six-legged finds. Kids' programs are open to all ages. Parents should accompany younger kids.

Pool
Located next to the inn is a salt-water swimming pool that provides a welcome alternative to chlorine for kids with sensitive eyes and skin. Solar panels heat the pool during cooler days.

On the Grounds
In addition to formal programs, the staff is happy to direct families to other fun diversions, including a hike through the woods to a fresh-water pond with a boardwalk for wildlife-viewing, and lawn games such as badminton and croquet.

Excursions
Older kids will especially enjoy outings offered by the inn in partnership with local Audubon or LL Bean-certified nature guides. Among the possibilities are sailing on Casco Bay, kayaking or canoeing in the nearby Audubon preserve, and fly-fishing on local streams.

One of the best expeditions coordinated by the inn is a lobster boat cruise in Casco Bay. Unlike some cruises that only allow guests to haul up traps, this one allows them to keep their catches -- buying them right off the boat and waiting while they are cooked up on the dock; or, for an even more satisfying tide-to-table experience, bringing them back to their cottages and boiling them up in your their kitchenette.

Downtown Portland
The inn is also located only a short drive from Maine's most iconic lighthouse tower, Portland Head Light, which not only provides for the requisite photo ops, but has plenty of cliffside trails to climb with excellent ocean views. Among the many attractions of Portland is the Children's Museum & Theatre of Maine where kids can walk through the jaws of a life-size whale and put on their own plays in a dress-up theater. And of course, the whole family can enjoy a trip to the L.L. Bean shopping empire, which includes not only the outdoor outfitter's flagship store, but also special stores dedicated to hunting, fishing, biking, boating and skiing, along with the popular outlet store that features great bargains on gear.

Sea Glass
The inn's in-house restaurant, Sea Glass, does a good job of riding the balance between offering food to please parents while at the same time being welcoming to kids. Chef Mitchell Kaldrovich was raised in Argentina, a country which knows the pleasures of an unadorned fresh cut of steak -- and he's transplanted that love of fresh, simple cuisine to Maine. Main courses let the flavors of the dish do the talking, with only a little white wine and herb butter to bring out the taste of local white scallops, or just a bit of butter to braise dayboat lobster from the nearby bay. He also offers up a nod to his home country with a grilled "gaucho" steak accompanied by chimichurri sauce.

The atmosphere of the restaurant is elegant but casual, with an open airy feel that allows parents to feel relaxed if kids aren't talking in whispers. To relax the young ones, they are provided with stone tablets on which they can "paint" with water, then watch as it gradually fades into new designs. High-chairs and booster seats are also provided. For lunch, meals move outside onto the patio overlooking the ocean and gardens; it offers flexibility for families to allow kids to run around on the grass after they've finished their meals while mom and dad have an extra drink or coffee to finish theirs.

All About the Extras
Kids are well-taken care of at the inn and made to feel at home upon arrival with a welcome "lollipop S'more" (basically S'mores on a stick), as well as a package of beach toys including a pail, shovel, and kite. Cookies appear magically at night during turndown. During the afternoons, kids can also take advantage of complimentary lemonade.

Babysitting
Inn by the Sea also has an arrangement with Portland Nannies to provide bonded babysitters.

The Art of Smart Timing
Northern New England can be very seasonal, with the bulk of restaurants and hotels for tourists operating on a season that lasts from May to October. Inn by the Sea is a welcome exception, open year-round for lodging, with special activities such as cross-country skiing offered in winter. For all intents and purposes, however, the inn is really in swing for families from mid-May, when its pool opens, through Columbus Day. Lobster boat cruises are also open during that period. However, the inn's family programming -- bug hunts, beach walks, etc. -- are only in operation from June to early September.

June is a good time to visit, as rates are less compared to high season -- July and August. Keep in mind, however, that the ocean warms a few months behind the land, so the water in Maine at that time is apt to be mighty cold. (All the more reason to use the heated pool!) September is also a good time to visit, especially at the beginning of the month when temperatures are still relatively mild, the ocean is relatively warm, and rates are relatively cheaper.

Getting There
Inn by the Sea is located 7 miles south of Portland on the headland known as Cape Elizabeth. It's a little more than two hours from Boston via I-95 and around six hours via Interstates from New York. The closest airport is Portland International Jetport, which is a 15-minute drive from the inn.

Getting Around
All of the standard rental car companies are available.

For Mom and Dad
For grown-ups, the inn's spa offers facials, body scrubs, and massages -- including the inn's signature Sea Waves massage, a modified version of Swedish massage that includes long rhythmic strokes to call to mind the patterns of the sea's waves. It can be customized to a deep-tissue version as well. (Spa services are available for teens age 16 and over, or children of any age with parental accompaniment.) 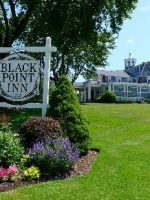 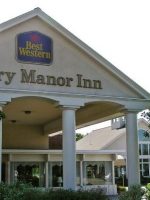 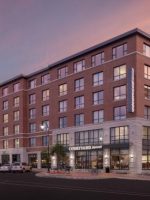 Holiday Inn Portland By The Bay 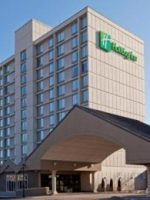 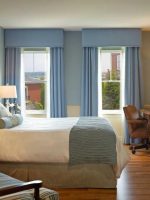 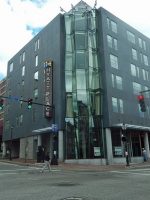