Nestled in the Old North Neighborhood and near Gordon Beach, the Melody Hotel Tel Aviv is a great choice for smaller families desiring a more intimate boutique hotel experience. The luxurious Triple and Family Rooms accommodate up to three guests. Family amenities include free bike rentals, in-room DVD players, cribs and complementary breakfasts. Guests will appreciate free snacks and beverages in the hotel lobby each evening. Families can dine at one of the many restaurants located near the hotel.

Perfect for a long weekend at the beach

The Melody is a great choice if you wish to come to Tel Aviv for a long beach weekend after touring Israel before flying home to colder climates. That is exactly what we recently did after a wonderful (but tiring) week traveling around Israel. Eldan, the Front Desk Manager, was tremendously helpful throughout our entire stay. He is a great asset to this beachfront property. You should definitely book a sea view room on an upper floor if you want the best view. Rooms are well appointed with good taste and comfortable beds. Bathrooms are very small, but manageable. Wifi works well. There is a happy hour every day with plentiful food and drink offered by the hotel.
Breakfasts are good as well. The hotel is directly across the street from a park and the Hilton Beach where you can rent lounge chairs and parasols at a reasonable cost. I will definitely return one day!

Pros: We had a late departing flight and were offered a very late check-out, which was definitely very nice. Still, this can hardly butter the other experiences.
We liked the proximity to the beach.

Cons: Upon arrival we were greeted by not a very much enthusiastic lady at the reception, which later proofed to be rather a tendency than an occurrence.
The building is facing a street with very much busy traffic. Thank God, we checked some of the reviews before booking so we were smart enough to book their "Premium Room" which was supposed to face the other side.
Our superior room was about 20 square meters but not very much functionally designed.
The wallpapers under the window were falling off uncovering a moldy wall. The air-con smelled like it hadn't been checked for quite a while.
After taking a shower the whole bathroom (2 square meters maybe?) floor was covered with water. There was definitely a leakage somewhere. Our complains (3 times) about that leakage only led to its small reduction. The water kept leaking.
Be aware that at 7 o'clock in the morning you might be woken up by the construction work from the back of the hotel.
The elevator may well be an issue since it is very small and very slow. If you can manage, I would certainly recommend using the stairs.
Breakfast was served in the lobby area. There were so many people the first morning and so little place that we even had to wait to sit. There are mostly no proper dinning (rather coffee) tables, so it's not very much comfortable to have your breakfast there. The owner could claim this as a designer decision, certainly, a very unfortunate one.
The personnel in the breakfast area was very poorly trained. Nobody's greeting you or help you get seated, offering you a cup of coffee or an omelette. The choice is pretty basic, mostly cold starters.
Ones a member of staff was missing and when he got back and got asked where he had been he simply answered that he was not in the mood. Well, we weren't in the mood either as this is nowhere near the experience one would expect paying 250 bucks a night. 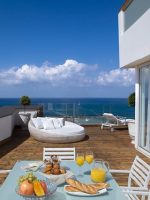 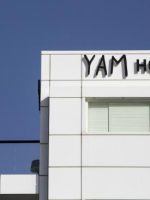