The Ocean Club, A Four Seasons Resort is quite simply the most luxurious resort in the Bahamas—and one of the most exclusive in all of the Caribbean. From the moment you arrive and walk through the airy French plantation house to catch a glimpse of the azure Caribbean past manicured green lawns, it’s clear you’ve happened on a little snatch of paradise. And that’s before you stroll the grounds, which require a staff of hundreds of gardeners to maintain, and are capped by a luxurious terraced flower garden inspired by the gardens at Versailles and topped by the ruins of a 12 century cloister, imported piece-by-piece from France in the 1920s and assembled here in the 1960s.

That’s when supermarket heir Huntington Hartford first purchased the small, uninhabited island off of Nassau, dubbed it Paradise, and set about building his manor house and estate that eventually became the resort. Over the years, the island has changed hands several times, once owned by TV personality Merv Griffin, as well as by hotel magnate Sol Kerzner, who is also responsible for constructing the theme park style Atlantis, Paradise Island next door. Today, the property stands alone and is no longer a part of the Atlantis collection of resorts. However, guests at The Ocean Club enjoy access and signing privileges to all of the attractions at Atlantis, a plus when traveling with kids.

In 2015, the resort completed a $25-million renovation, which included the addition of the new Hartford wing and a new full-service restaurant. In 2017, it became a Four Seasons Resort. And in 2019, it opened two-bedroom villas with private plunge pools.

The overriding atmosphere at the resort is one of pampered relaxation, with coconut palms swaying in the breeze and adults lounging on daybeds by the garden pool while uniformed staff bring them Champagne and cocktails. Despite the element of peace and quiet, however, Ocean Club is actually an excellent choice for families, with a stellar kids’ club that’s full of activities for young ones, and daily field trips to Atlantis or other parts of the island for water sports activities. At Ocean Club, each guest is made to feel like the experience is created specifically for them, with a dedicated butler assigned to every room, Champagne and strawberries delivered at dusk (milk and cookies for kids), and sumptuous accommodations that put the luxe in luxury.

The only downside, of course, is that with exclusivity comes price—if you are the type to balk at a $25 hamburger by the pool (to say nothing of the room rates!), this spot may not be for you. Additionally, despite the promise of individual service, there’s a range of attentiveness among staff, who are all friendly, but vary in punctuality and helpfulness—not something that might be noticed at a regular resort, but something that becomes glaring at a resort that touts an air of exceptional service with prices to match. That’s a minor criticism, however, for an experience to stay at one of the most lavish properties in the Caribbean. If you can afford it, the experience is not one you’re likely to soon forget.

The rooms at Ocean Club employ every luxury you'd imagine, as well as some touches you might not expect. In all, the property has 107 accommodations, spread out in two wings of the main house, as well as several more exclusive cottages and oceanview villas. Upon arrival, guests are assigned a private "butler," who will offer to unpack luggage, handle laundry, customize the mini-bar and arrange activities for your stay. That sets the tone for the level of comfort, which continues with amenities including satellite TV, DVD players, iPod docks, down comforters, and oversized bathrooms with marble vanities.

The two wings of the main house have slightly a slightly different feel: those in the Hartford Wing are more classic colonial in their decor, with dark hardwood furniture, armchairs, and elegant headboards on the beds. Rooms in the Crescent Wing are slightly larger and exude a more contemporary modern style, with an airy feel accented with deep reds, blues, and mustard yellows. Both wings feature king beds in the guestrooms, and for suites, a separate living area with a pullout sofa; rooms can be combined to add another bedroom. Deluxe rooms feature a sunken bath with tiled Roman mosaics.

The more elegant oceanview villas create a home-away-from-home with vaulted ceilings towering over 4,000 square feet of living space that includes a full kitchen (private chefs are available for hire if you don't feel like cooking yourself), spacious bathrooms with steam shower, Jacuzzi soaker tub and indoor/outdoor shower that opens out onto a private deck. Another deck features 25-foot French doors opening up onto drop-dead views of the ocean below, and your own private infinity pool for secluded bathing. It truly doesn't get any better than this.

In all accommodations, children 11 and under stay free with two adults; children 12 to 17 are charged an extra fee per night. Cribs are available free of charge, as are cots for kids 17 and under.

I’m never disappointed with Four Seasons resorts. We stayed here for 3 nights, following 4 nights at SLS Baha Mar. The split venues actually worked well for us. The Ocean club is a very classy affair. The room delightful. We had a very helpful Butler who looked after us throughout our stay. 3 Pools, an amazing beach. Slightly limited dining options I suppose, with only one option in the evening. However, we enjoyed all the food we had whilst there. The hotel was relatively quiet, or so it was during our visit, but actually that suited us, so we enjoyed a relaxing time. We used the Gym each day, which had everything we needed. The staff were all excellent. One slight niggle, was the relative lack of media options in the room. No speaker to connect to. No ‘casting’ to the tv, as many top hotels now provide. However, the Butler immediately sent a member of the IT team around who sorted a workaround as they connected my IPAD to the TV, but I would have expected it to already be an option. That said, it wouldn’t matter to everyone, but I like my music and tv. This was very minor however and overall, it was an excellent stay and I would definitely stay again.

The only place to stay in Nassau

Stayed here over 6 days / 5 nights in November 2019. The service throughout the hotel is absolutely lovely and friendly - everyone on the staff is friendly and wants to help you out. While it lacks the “excellence” in service (attention to detail) that other four seasons property have (like in Asia), this hotel makes up in their desire to strive to be excellent combined with their friendliness. We didn’t stray from the Four Seasons at all except for a quick 45 min sojourn to Atlantis to check it out (and from where we quickly hurried back). Every day we ate at Dune for breakfast and dinner and ate from the pool bar or Dune for lunch. The food is great, the setting is awesome but be aware - it is pricey. We had some service hiccups at Dune (slowness) but management went the extra effort to correct the service issues for the following meals. Can’t say enough about the staff at Dune after this experience. They truly want to make your stay as enjoyable as possible. The rooms are four seasons quality. The beach is the treat. Quiet, clean, manned by a life guard, with helpful beach staff and servers who are there to make your day on the beach as comfortable as possible. The main pool is busy but gorgeous - overlooks the ocean. The life guards play with the kids in the pool too! The kids club building was under renovation but there is still a kids club and my daughter had fun hanging out there one day. The staff in the kids club are really kid friendly. Thanks to Dia (kid’s club), Inge, Keno and Stephanie and our server on the evening of November 5 (Dune) and Justin and Lachantelle (lifeguards). We can’t wait to come back next year!

Pools
Ocean Club has two pools on property, and both are exceptional in completely different ways. The zero-entry Family Pool has a sloping shallow end similar to the ocean, so you can rest easy on the lounge chairs while even youngest kids frolic and play in the water. The pool slopes down into a sizeable deep end with several waterfalls to add to the fun. It's located in a secluded area separate from the more "adult" areas of the resort, so parents needn't worry about disturbing other guests.

The Versailles Pool, meanwhile, is an idyll of tranquility; open only to those aged 14 and above, it is situated under the terraced gardens and ruined cloister, offering a perfect venue for quiet contemplation while the kids are enjoying activities elsewhere. A new pool was added in 2015: an oceanfront infinity pool, which is the place to be when lounging at the resort.

Kids for All Seasons
The kids' club here is exceptional. Open to kids ages 4 to 12, it operates in a clubhouse full of games and opportunities for arts and crafts activities, with a separate room with a flat-screen TV/DVD, and areas for PlayStation 3, Xbox 360 and Wii game consoles. The club organizes regular activities, such as sporting events and lawn games, but the beauty is that parents can check kids in and out as desired during the day at no cost—the club is completely free to guests.

When the offerings at the resort itself pale, the club also arranges field trips to Atlantis, where kids are not only able to pay a visit to the waterslides and pools, but are also able to participate in special exclusive activities, such as behind-the-scenes tour of the hospital for convalescing sea creatures.

Ocean
This casual poolside restaurant serves salads, sandwiches and the like, with lovely views of the beach.

Versailles Terrace
Lunch is available at the Versailles pool with a small grill that provides a handful of options to enjoy while enjoying the pool and gardens.

The Best Time to Visit
The Bahamas has two distinct seasons: the "dry season" between December and May and the "wet season" between June and November. Temperatures during the former are warm but not hot, averaging between 60 and 80 degrees Fahrenheit, while they creep up during the latter to 70 and 90 degrees. Even during the wet season, there is little rain to worry about—mostly, the islands see just a passing shower or short downpour in the afternoon, followed again by sun. The only time you are taking a chance is during hurricane season from August to November, when once in a while a major guster does pass through; if you are averse to risk, book outside that time, though odds are you'll be fine. While the rates at Ocean Club could never be described as a "bargain," special offers are sometimes available during low and shoulder seasons, from June to December.

Getting There
Guests to Ocean Club fly into Nassau International Airport (NAS), which is approximately a 45-minute drive away. (Be sure not to book a flight to Grand Bahamas, 150 miles away!). The resort offers a car service to and from the airport for a hefty round-trip fee; a much cheaper option is to take a taxi.

Getting Around
The Ocean Club offers complimentary car service to and from Atlantis. 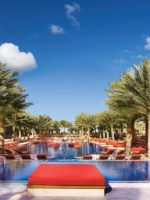 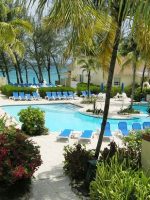 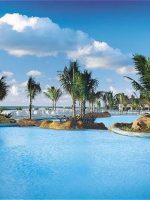 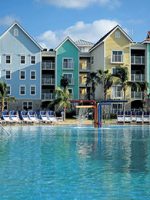 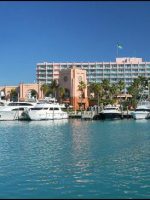