One of the many boutique properties on Anguilla, Paradise Cove has just 26 all-suite guestrooms, all with a view of the pool and manicured gardens. There’s a large playground for kids, but no direct access to the beach. Beach access is provided with a daily, free shuttle to Smokey’s at the Cove, less than five-minutes away. The one- and two-bedroom suites include a completely furnished kitchen and daily housekeeping services. Studio suites have kitchenettes. If you really want to go all out, book the Penthouse suite, perfect for a larger family. Breakfast, lunch and dinner are served onsite. Wi-fi is available throughout.

The staff here has been really great, going out of their way to accommodate my needs. I arrived on a Sunday, and chef was called in to cook. I was here for business and was picked up at 7:30am. The breakfast does not start until 7:15am, but chef came in early to provide breakfast. This resort is not right on the beach, but close enough to walk, or 45 second drive.

***DO NOT STAY HERE***
I’ll start off by saying that I’m not a hotel snob. I travel frequently for work and we’re typically put in in the cheapest hotels they can find. This is by-far, the worst hotel I’ve ever stayed in anywhere in the U.S. or internationally, for multiple reasons. The abridged version: it’s an overpriced ghost town, filthy, crawling with bugs, lack of security, no gym/fitness center and inconsiderate staff.

#1. Cleanliness: The room my co-worker and I stayed in was filthy. Every single day when I got up and went into the bathroom in the morning, I would find a swarm of ants all over the sink, my toiletries and the towels (see pictures). They were coming out of outlets and cracked ceramic tiling. I notified the front desk about the ant problem and showed them a video. Their response was that they would put out some ant traps. My coworker had ants all over his clothes and ended up just keeping everything in his closed suitcase. We made the mistake of buying cereal. One morning my co-worker poured himself a bowl of cereal, and after pouring the milk found a group of ants swimming around and crawling out of the bowl. I had to kill a cockroach and found a dead one with a bunch of ants in the kitchen (see picture). There is mold and mildew all along the shower doors, which don’t stay on the track and barely open (see picture). The plumbing is messed up (terrible water pressure, have to stand right under the shower head) so water runs all over the floor every time you shower. I couldn’t tell if it was coming out from under the bent/broken shower door or if it was another issue. I ended up just putting a bunch of towels down to soak up the water every time I showered.

#2. Security/Considerate Staff: The cleaning lady was very nice, however one day I went back to the room and found a duplicate room key in the door; completely unsecured. I looked around but could not find her. The workers repairing the room next to mine were sitting on the step in front of my door but said they hadn’t seen the cleaning lady. I went and found a different cleaning lady who said she didn’t’ know where ours was and didn’t know why the key would be left in the door. I took the key to the front desk and told them and they said yeah, that’s the cleaning lady’s copy of the key and that she was probably somewhere around cleaning another room. I told them that I had valuables (cash, laptop) in the room and that it wasn’t acceptable to just leave it unsecured. They didn’t seem to care.

#3. Noise: Because this hotel is in such poor condition, it’s under construction. The room directly next to us was being gutted. Most days when I came back from my employer’s resort (Four Seasons – highly recommend if you’re coming to Anguilla), there were old beds, broken refrigerator/appliances and trash outside of my room. The workers were extremely noisy early in the morning. The worst was 1/1/19…after being out late for New Year’s Eve, the banging and laughing right outside the door started early. The maintenance and construction workers had no issue sitting down on our porch (directly outside the living room window), smoking cigarettes and talking loudly all day. I’d be sitting in the living room having breakfast and they’d be sitting down on the porch just hanging out five feet away (see picture). I understand the need to renovate and repair rooms after the hurricane, however out of all their rooms (empty parking lot), they could have put us in a room not attached to one being renovated. It just didn’t’ make sense at all.

Bottom line:
Overall, Anguilla was great. It’s a beautiful place with nice people. However, if you’re coming to the island, don’t waste your money staying at this place. I never saw a single person at the bar or filthy pool (cobwebs all around it). It’s unsanitary, run into the ground and poorly managed by people who are not security conscious. 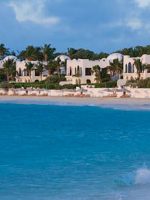 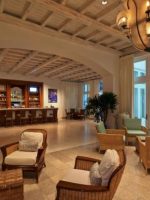 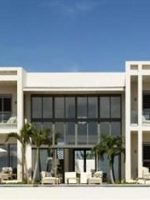 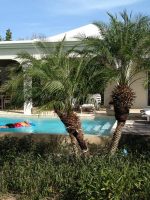 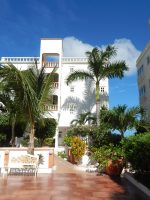 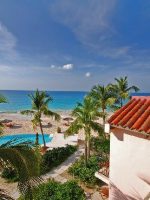