Located just 1 mile from Dollywood, its close proximity to the theme park makes Quality Inn & Suites at Dollywood Lane a favorite among families. Parents will appreciate the option for a one-bedroom suite with a mini-fridge to get some distance from sleeping children. This hotel has an outdoor pool with a splash area for the summer, and guests have access to the neighboring Comfort Inn & Suites at Dollywood Lane’s indoor pool. There are many family-friendly restaurants nearby for dining options for lunch and dinner, though the hotel offers a complimentary breakfast daily. Additional amenities include guest laundry facilities, free parking and free Wi-Fi. Check-in is at 3 p.m. and check-out is at 11 a.m.

Nothing to brag about

My sister, a friend, and I stayed here for a girls weekend getaway. The location was good. The beds weren't that comfortable. Our room wasn't cleaned the second day so I had to go to the office to get fresh towels and trash bags. The front desk staff were very friendly. Probably won't stay here again though.

Our fall season stay was a nice surprise. We had a King room (#133). It was clean, the bed was comfortable enough. We had a couch with a large coffee table as well as a refrig and a microwave and Jacuzzi.There was a gas fireplace in the corner and separate bath area with attractive double doors. We did use the Jacuzzi jets to relax even though we are usually hesitant about doing that in a hotel setting. There was a floor lamp in the corner near the window/couch. On the con side...both night stands did not have outlets for charging, but there was a wall outlet that still worked out fine on the bathroom wall side...close enough for cords to reach. Also there is no way to turn on a light in the bathroom without the noisy fan running. It's all or nothing. And then because of that, if you don't want to hear the fan and you turn off the bathroom light at night, it is dark in there. HOWEVER, the annoying blue light on the microwave that stays on serves quite well as a night light...it may however be an issue. The answer would be to see if you can turn the microwave toward the bathroom wall thereby stopping it from glaring toward the bed at night. We did not think of doing this on our one night stay but would definitely try that if we would have stayed more nights. 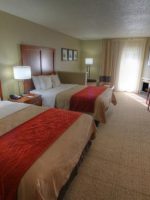 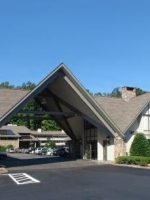 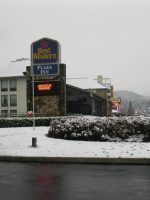 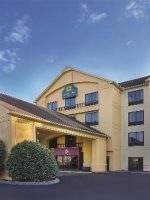 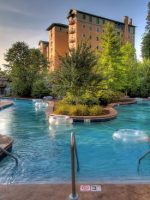 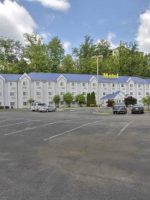