This beachfront resort features 335 guestrooms with a variety of family-friendly amenities like a refrigerator, a microwave, an in-room safe, and free Wi-Fi. However, not all rooms have beachfront views; some are poolfront, while others overlook the gardens. The property also is home to a heated outdoor swimming pool, an outdoor hot tub, a Polynesian grotto pool with waterfall, and a children’s splash garden. Guests can dine at either The Garden CafÃ© or The Island Grille. If they prefer, they can order a pizza from the hotel’s in-house pizza delivery service.

This hotel is in a great location centrally located right on the beach. The staff is friendly and the lobby/bar/restaurant area is pretty nice. The room however is in need of a makeover. It was clean but dated.

The Good and the Bad

So I will start with the good of this hotel. The location is great, the beach is beautiful and the property of the hotel is nice. Now the bad...... this is the second time we have stayed at this hotel. Once two years ago prior to any renovations being completed, and then again last month (October 2019). We knew from being here before that we wanted an ocean front room on a higher floor due to the view being obstructed by trees on the lower floors (floors 1 and 2). We requested this specifically when we made our reservations over 7 months ago. I called the hotel not once but twice in the months leading up to our arrival to ENSURE that they knew we wanted an upper floor which they acknowledged they saw in our reservation. When we arrived, not only were we NOT put on an upper floor but we were put into the NON RENOVATED rooms on the lower floor (floor 2). We immediately asked for an upper floor and were told there were none available because they had alot of corporate hotel employees staying in the hotel who were using the upper floors. BUT, we were told that there were people checking out the following day and we could get an upper floor then. We then went down to the front desk the following morning only to be told that we could NOT be moved to an upper floor and they did not know why anyone told us that we could. After spending the first two days of vacation going back and forth to the front desk trying to get an upper room and then finally giving up and unpacking in the lower level room we were given, we were then called and told there was a cancellation and that we could move to the upper floor. We were there with a large group and we were one of the first ones in the group to check in days earlier than the others. We were told repeatedly that there were no upper floor rooms available or coming available during our stay only to find out days later that not only one but SEVERAL of the other people in our group who arrived days after us were given the very upper floor that we were told had no availability. We asked if they had requested upper floor rooms in advance and they all said NO. Although we were finally able to move to an upper floor room, the disruption in our vacation for the first two days of not being able to unpack and then unpacking only to repack was just very disruptive and didn't make for a very relaxing vacation. Also..... the upper floor renovated rooms have NO CLOSET for handing clothes, there are literally only two pegs in the wall and one hanger. There was no microwave as in the other rooms and NO IRONING BOARD OR IRON. We also had to request extra towels, there was ONLY ONE in the room when we got in there. I realize that these situations are going to happen when there is a hotel that is half way under renovation, but we should have been told way in advance that they WOULD NOT honor our request for an upper floor when I called twice prior to our arrival to confirm that we could have an upper floor. When you go on vacation, you are there to relax immediately, not spend the first two days literally walking back and forth (across a large resort) to get to the front desk only to be told that the managers were all in meetings and we would have to wait. 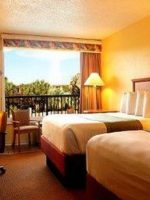 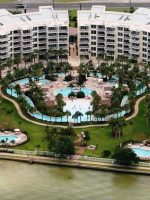 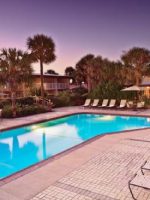 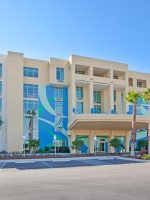 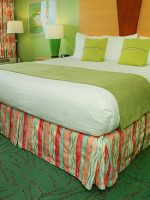 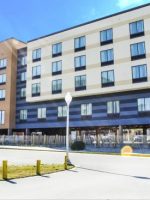