The Rodeway Inn Buffalo in Buffalo, Wyoming offers pet-friendly, comfortable guestrooms, an outdoor pool with waterslide, a guest laundry facility and free Wi-Fi – all for cheap nightly rates (often less than $50 per night). Other perks include free coffee in the lobby and free parking.

I will preface this with I don't usually do this and I wasn't going to until it got worse. I will start with the pros, but the cons will follow.

Pros:
1. Budget friendly-I lived in Buffalo for a few years before moving back to Texas. When we originally moved we stayed here with a room of animals and had no issues. I came back for 4 nights for my birthday to visit friends and hike the Bighorns. I had worked at the Hampton but knew I wouldn't be able to swing that price point so I settled with the Rodeway since I was familiar with it and it was pretty central to town.

2. People are nice enough-while I would have liked a bit more chat, people seemed relatively friendly although less so than our stay in 2013(although I am aware that the place has since changed hands so ????????‍♀️.

3. Pet friendly! I have a large dog (110+lbs) and have gotten used to super 8s and La Quinta since they don't have weight limits. Was an extra $10/night which is on par with the other places. And they have a nice, long, fenced in run up against the building she could go potty, one of the other reasons I picked this place.

I wish there was more but unfortunately most of this review is negative.

Cons:
1. BED BUGS. Whether or not it is a rare occurence like they said or not(like I said earlier we didn't have an issue 5.5 years ago) I woke up on Thursday(my last full day) with a full day planned until I realized I had bites on my arms. I immediately went and bought trash bags and laundry detergent(extra expense #1) and bagged up anything and everything that had been in the room and told a housekeeper who in turn told the front desk woman(bad with names, sorry.) Who came by to inspect the room and apologize and offered to move me. I was so upset all I wanted to do was to go home but decided to stay my last night. After bagging stuff up, I headed to the laundromat(extra expense #2) and spent 2+ hours there getting what things I could washed and dried (instead of hiking and enjoying my last day on vacation).

Now I am home and the bites keep appearing since apparently they can take up to 2 full weeks to appear I get to go to work looking like I've been infested with something. I also get to spend my weekend washing things I didn't/couldn't AND having to get my car detailed(extra expense #3) in case I had nasty hitchhikers.

2. The heater/ac is a window unit. I am a light sleeper and the stupid thing does not stay on constantly(not even the fan like most units in hotels) and even with my box fan(my dog also likes to sleep cool) it clicking on and off all night would wake me up with a start.

3. There is no carpeting, that may be a pro for some people, but in the winter it was miserably cold as the heater wasn't turned on until I did so. I had an extra comforter that I put on the floor to work as rug for both me and my dog.

Overall, I will never stay here again. However, had there been no bedbugs it would have been an okay stay.

The attached pictures don't show the extent of the bites as I have them on my chest, legs, and face as well as my arms(pictured).

Could have been better

We stayed one night at the Buffalo Rodeway, and had a lot of pros and cons.
Pros - Good bed, plenty of room to set the luggage and good location.
Cons - Thin pillows, dusty refrigerator and microwave, very small vanity inside the
bathroom, No breakfast, and the worst thing " the tub would not drain, so I was
standing in someone elses ucky water while showering. 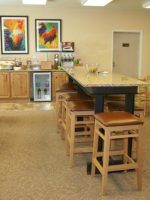 The Historic Occidental Hotel & Saloon and The Virginian Restaurant 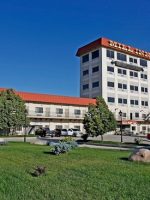