The Seahaven Beach Hotel is a great place for families looking for a fun activity-filled vacation. Overlooking the Gulf of Mexico, this hotel offers many different price and room options. Your stay comes with access to a large private beach, where your family will find tons of activities. Make sure to take advantage of the wave running and parasailing opportunities. At the outdoor pool, kids will find hours of entertainment, while the adults relax. A Kids Club is hosted seasonally, offering supervised activities for kid visitors. Onsite dining at the beachfront Sharky’s Restaurant and Tiki Bar makes mealtime easy and convenient. Plus, kids eat free! Laundry is available for your convenience. Free Wi-Fi will keep you connected throughout your stay, and the fitness center will keep you in shape. Start each day on the right foot with a complimentary breakfast.

If not for the event we would have left!

Booked a double room as this place was a platinum sponsor of the rally we were going to. Called ahead and made sure we would have safe secure parking for our motorcycles. Asked a lot of other qusetions and felt pretty good about the place. We were paying top $$

Upon arriving found the location exactly as promised , directly across from one of the event venues and a minute walk fro Sharkeys and close to a convenience store and Pier park. Checked in and found out our room was on floor one which is at beach level, not road level. The travelers in this party were two physically challenged persons (one with COPD and one with severe arthritis ) and a healthier senior citizen. We lugged our stuff all the way to the one elevator and then found our room was almost as far away from the elevator as it could be. When we went in the room was straight but by no means clean , also the oven was on and would not shut off. The room did open on to the beach and we figured we would clean up and make do. Off we went to have fun and we bought bleach and soap to clean sink, counters, dishes, microwave and pot and pan. We called front desk as oven was still on and wouldnt shut off and the remote for TV was missing.
An employee showed up shortly with a remote and made sure it worked and then twisted and held the knob on the oven until it went off. He then left, as sooon as he left the oven came back on. Also the AC wouldnt cool the room; it kept short cycling. Since it was cool we slept wiyh door open and oven unplugged all night. Upon awakening we requested move and were moved to a 2nd floor (road level) room that had been remodeled. It was much cleaner, cooler byt was still plagued with dirt like the other room. We cleaned this one and despit consatnt peoblems with keys not working and the occasional bug skittering around stayed out our time there.

Had the bike event not been across the street and at Sharkeys we probably would have packed up and asked for a refund. this place is old but there is NO excuse for piles of dirt and dust on top of everything. The beds were comfortable and the shower hot. If you do risk staying here ask for a remodeled room, Make sure you have a back up plan

There was 8 of us, rented 2 double rooms and asked several times for our rooms to be close together where we could have access to both road and beach. One room was on first floor sea level with no view of road like a basement and the other was on third floor where both were available. It was very inconvenient for friends to get together in the evening. Thumbs down. Beachbreak By The Sea 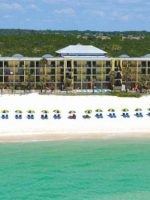 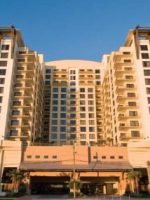 Osprey on the Gulf 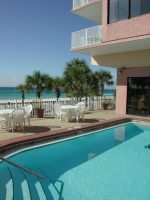 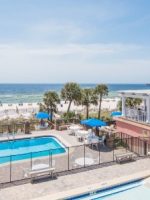