Sheraton Minneapolis West Hotel is a wonderful place for families with kids to stay. This hotel is perfect if you’re visiting the Mill City Museum, Centennial Lakes Park and Minneapolis Sculpture Garden. A few other points of interest include the Minneapolis Institute of Arts and Stone Arch Bridge. This 4-star hotel has 222 rooms, a fitness center and swimming pool. Sheraton Minneapolis West Hotel dining options include room service and onsite restaurant. Punch Neopolitan Pizza, D’Amico & Sons and Famous Dave’s BBQ Shack are all kid-friendly restaurants that are reputable and are near the hotel.

Hotel staff was polite and helpful. Free mini candy on the desk was fun to grab every time we left or returned. Elevator was close to lobby and room but not too noisy. The beds were full size not queen so were pretty cramped for us as a couple. Pillows and bedding were very comfortable. The bathroom and shower were very nice. Local construction made getting there a bit confusing. I appreciated the fitness center as I am on a regimented exercise program. Best feature was proximity to Breadsmith Bakery.

My 3-day stay was fine, though I am usually not very fussy. I did not pay for it so I cannot comment on quality vs price, but I would probably be less happy if I had. Review broken up into categories:

The layout of this hotel is very strange. The building essentially consists of two large rooms, each 4 storey tall: one is the lobby/dining area, the other is the pool. With a few exceptions, all of the room doors look onto one of these large rooms. In other words, rather than the room entrances being along corridors, they are on balconies which look down onto either the lobby or the pool.

This has several negative consequences:

a) All of the rooms which effectively separate the lobby and the pool do not have windows which look onto the outside. Instead, the windows just look onto the indoor balcony, which many people will walk by, which itself looks onto either the pool or the lobby.

b) Because the pool is in a totally open area, and there is no door separating it from the lobby, the smell of chlorine is very prevalent throughout all main areas of the hotel. It is the very first thing I noticed when I stepped in the building. If you don’t like that smell, this place is most definitely not for you.

Another point of note, whilst the two main rooms are large, they feature very little light. The only windows are quite small and only appear at the very top of the room, just below the edges of the ceiling. This means both rooms are very dark, regardless of how sunny it is outside. Little difference between night and day essentially. I really don’t understand why the architect did not introduce at least a series of skylights, if not a completely glass roof.

Not very nice. It is not terribly large for the room it is in and for a big hotel, and whilst I did not swim in it, it did not look terribly clean either. Looked more like an outdoor pool that somehow found its way indoors rather than a proper, well-maintained indoor pool. Moreover, because it is encircled by about 80 rooms (see above), bathing in it might feel a bit exposed, despite the fact that it is a public pool.

Room quality is dependent on where the room is. If you have one with a window and are above ground floor, they are fine. I was lucky mine was on the 4th floor and looked onto the lake/trees behind the hotel. However, as mentioned above, some rooms don’t have windows, there is also a pair of rooms which directly faces the elevators (without windows either), and generally any ground floor room isn’t going to be terribly nice given that your door is essentially part of the lobby or pool. I would recommend getting a top (4th) floor room if you can, which I believe comes with access to the club lounge/complimentary breakfast.

The inside of my room was clean. Mini-fridge empty, which was odd. A lot of the decor is dated, the shower in particular felt like it was from a different era. The water pressure is messed up, it comes out of the bathtub tap at torrential speeds but then the shower pressure is extremely weak, no matter what setting you choose. How this happens I don’t know. The shower head was non-detachable and leaked, which meant water splattered onto the wall and outside the shower, regardless of how you positioned the curtain.

The air conditioning unit did not work (and from other reviews, this seems to have been the case with many other people). You can set the temperature to change, but it does not. My room remained at 72F during my entire stay even though I set it into 'cooling mode' at 60F.

The TV was large but old. I don’t mind this because I don’t usually watch television when I am abroad, but some people might care.

Mostly staff were friendly, though many appeared under-trained/incompetent. At breakfast I found an insect, roughly the size of a small moth, in one of my raspberries (which is common with such fruit, so I don’t really want to blame them), which I pointed out to the waitress and suggest the berries might need a clean. However, rather than apologising or being grateful, she disagreed that it was an insect, saying it was a ‘seed from the raspberry’. I explained that no, it was an insect, which I’d been watching crawl around the berry for the past minute. She then pretty much smushed the insect in the midst of trying to prove her point, ‘no no see, it is not moving, it is a seed’. So, news for you all, apparently raspberry seeds are now able to grow ten times their size, sprout legs, wings, and antennae, and crawl away to germinate elsewhere. Evolution happens fast these days.

I was lucky to have my stay paid for, which included the complimentary breakfast. However, if you are paying for the breakfast, it costs around $20 (including tax). This is absolutely ridiculous for what it is i.e. a regular buffet, no more elaborate than what you’d find at a cheap hotel, or a fairly nice school cafeteria.

Can’t comment on restaurant (well, they call it restaurant, it’s actually a bar), but prices looked high for what they were offering.

If you pay a premium you get access to this lounge, on the top floor. This is by a large margin the nicest part of the hotel. You can have breakfast there (rather than in the lobby) as well. The coffee machine is pretty terrible, produces muddy hot water rather than Americanos, and broke down several times during my 3-day stay. I heard others comment on the coffee quality, so this is not me being European and picky. Otherwise, comfortable seats and relatively quiet. I wish it didn’t have two huge TVs, but in this day and age and particularly in the US, that’s harder to find.

The hotel feels a lot like it’s trying to be fancier than it is. A mildly amusing example: after checking in I was offered a complimentary… bottle of water? It’s like trying to be upscale by offering complimentary [something], except the hotel isn’t upscale so you’re getting a plastic bottle of water that costs like $0.70. A bit strange, and for a hotel which encourages visitors to decline room services to save energy on cleaning, giving away lots of plastic doesn’t sound terribly ‘green’, recyclable or not.

Overall: if you’re just needing a place to stop at for a night or two, it’ll be fine. For a proper holiday, not necessarily. 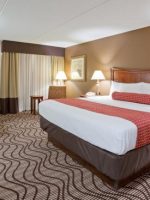 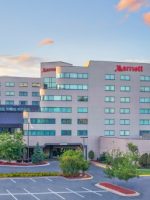 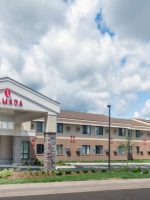 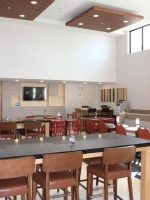 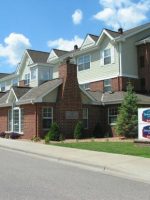