The Wyndham Garden Ventura Pierpont Inn offers 77 guestrooms and suites since 1910. The boutique hotel overlooks the Pacific Ocean and is home to Austen’s Restaurant, which serves a fare of classic American food for breakfast, lunch, and dinner. The hotel offers a two-queen guestroom that sleeps four and a two-queen suite that sleeps up to six guests. Several historic stand-alone cottages and suites are available as well. The Victor’s Estate suite, built in the 1930s, is on the southwest side of the property with ocean views and features three bedrooms that sleep up to eight guests.

My boyfriend and I booked the deluxe cottage for our first anniversary and were super excited. I called the day before arrival, to confirm our reservation, and after some investigation, Gabriel told me that they were transitioning to a new reservation system and the cottage had already been booked for over a month. He managed to get me into the smaller cottage and gave me a discount. He also said he'd try to do something nice for us.

When we arrived and got to our cottage, Gabriel had kept his word. There were rose petals on the bed and a sweet card from the staff. We noticed that the heat and the fire place were not working and Gabriel, then Gary, worked with maintenance to correct the problem. Unfortunately, the heat was never fixed, but we were provided additional blankets and were fine overnight. We were really excited about the Jacuzzi tub, but discovered we had no hot water. Maintenance was dispatched a couple times to fix the problem, but that night we never had hot water.

Sunday morning, we were excited to discover that the hot water had returned. We requested a late checkout, which the staff were able to accommodate. Upon check-out, Gabriel apologized for all the issues and gave us a nice discount on the room. All in all, it was an adventure and makes for a memorable trip.

I can't say enough good things about the staff. They were polite, helpful, and so apologetic. We were told that there had been some recent work prompting the gas to be turned off, which made us wonder why the management wouldn't have turned it back on prior to renting the cottage again.

One other thing: there was a party being hosted at the restaurant and the boom boom of the music lasted until 11pm. If we were planning to turn in early, this would have been a problem.

Again, my thanks to Gabriel and Gary for taking such good care of us on our special weekend.

Comfortable Accommodations with a Superb Restaurant

We’ve stayed at this hotel a number of times in various rooms. On this visit, I reserved a suite which was large & spacious with great views of the ocean, albeit looking over the 101 Freeway. Although it was an updated room, it was done on a budget with little change to making the closet more welcoming and an odd configuration of the bathroom. The living room had not outlets except for one power strip in the corner.

The bed was comfortable and there was good lighting in the bedroom & living room.

The standout amenity at the hotel was the restaurant. It serves breakfast, lunch & dinner and there is a wide variety of options. The food was consistently delicious and the service was prompt & courteous. The restaurant and service rivals anything in the Ventura area. A real gem.

Best Western Plus Inn Of Ventura 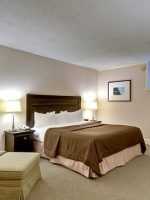 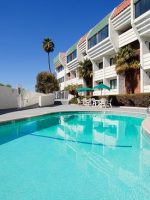 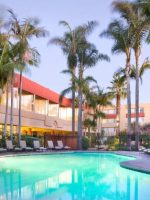