A two-minute walk from the beautiful Shoal Bay beachfront, the Allamanda Beach Resort offers a variety of suites, from studio apartments to deluxe double rooms. The accommodations are a good option for smaller families who won’t mind sharing a bedroom. Maid service and babysitting are available, and baby beds can be arranged on request. Overall, it’s a simple hotel on the quieter side, with some of the most affordable prices on the island.

A bit dated but on a path of recovery!

This was our second visit to Anguilla...a quieter more laid-back island with lots of beauty, wonderful beaches, and amazing people. A very interesting stay - booked for 5 days on VRBO...not sure just how they handle their bookings, but it (our reservation request) was there one day and marked cancelled the next. Owner said it was because they list multiple units via one ad, so it must stay open for anyone else that wants to book, and he assured us we had a place to stay. Also, no charge to my card either before, during, or after my trip (so far that is). When asked he said the billing was done through the "travel agent"...not sure who that is but will keep an eye on things. Everyone was extremely nice in correspondence and when on-site. Our arrival was on the weekend after business hours, but they had someone onsite to greet us and show us around a bit. The facility has been around and is somewhat old school, but they're making lots of efforts to re-vitalize and re-new. Here's a quick shot at the facilities - pool was half full of dirty water. We were told when we asked that it had "just failed the week before”...yet there are several reviews over the last few years indicating that they do have problems with the pool...but hey, it's an older facility. We did complain about the pool and even sent an email to the owner...he didn't respond, and the office staff defended with the "just broke last week" statement...I'll give them the benefit of the doubt for now. To their credit, they did fill the pool back up the next day, but it took two days for the water to clear...ready to use the morning we were checking out. Our room was pretty much as advertised...studio or maybe "old school motel" layout...clean, fully functional with a full size refrigerator and stove, and overall pretty good for the price we paid. I will say that the bed was very uncomfortable...hard...might be ok for some but hard on my back. Maybe a memory foam topper would help but either way I wasn't a fan. There were some WiFi issues, but they sent folks over after hours to get us fixed up. WiFi worked great the rest of our stay. TV was good...even a few English-speaking channels which we did not have on St Martin for the balance of our trip. The one thing that made us feel just a bit edgy was that we were the only guest in the entire facility...I know it's off-season, but it was just a bit eerie, especially when we were coming back at night. No security, etc. but we really didn't feel at risk and this area of the island is great, so not a big deal. The overall facility must have been awesome in its day before age and a few hurricanes battered them down. The area around the pool was good except what I'm assuming was a water feature/fountain/fish pool of some sort that was empty and had been for quite some time. The outside bar hadn't been used in a long time and the restaurant area was boarded up and looked like it hadn't been used in over a year...but hard to tell. If they were hit by Irma in 2017 I can understand the impact and it does take both time and a brisk business to enable a full recovery. Some of the rooms that were in another part of the property were not in usable condition...another indication of possible storm impact.

Area features...Shoal Bay Beach is absolutely stunning. When we visited in 2016 the surf was pretty strong and frankly it just wasn't that impressive...but this trip changed my mind completely. Beautiful sand, clear blue waters...just awesome. The property really isn't in a spot where walking to Shoal Bay would be easy for most but it's not a mile away either...more like around the corner. The North Shoal Bay Beach is fairly close and easily accessible although they really should clear the path of some overgrowth. The beach itself is in pretty sad condition...very little actual beach for most of the length, lots of rocks under the water in some areas, beach was actually blocked in a few spots by washed up debris (parts of trees and such...not trash). I think the beach was certainly usable with caution...but with Shoal Bay so close...not a hard choice for me. One note...if you go to Shoal Bay Beach, I'd recommend going down the beach to Gwen's Reggae Bar and Restaurant...free parking and complementary beach chairs and umbrellas...and awesome food. If you happen to be there Sunday afternoons there’s great entertainment too. If Pina Colodas hit your fancy...highly recommended! If you want to stay on the eastern end you can park at Shoal Bay Villages...$5 to park and $10 each for a chaise lounge and umbrella...not a bad price and there are several restaurants and beach bars on that end of the beach as well...we did both and preferred Gwen's free parking and free beach chairs and umbrellas 10 to 1, but that's us.

So, my overall impression - Allamanda Beach Club is not a bad choice for the budget conscious traveler...you get what you pay for mostly...but it's clean, in the process of being renovated, and you won't find a friendlier staff anywhere. Just make sure you understand you're not going to a $250 a night villa...be realistic. Would I stay there again...maybe...I'd ask a few more questions about the status of some of the amenities for sure. But even without the pool we had a great time and this place served as a great base to explore a wonderful island with charming people. I really like Anguilla...easy to get to from St Martin Marigot ferry, rental cars at Andy's were awesome (wonderful folks!!!!) and no where near the rat race, traffic jammed, people everywhere hustle of St Martin. It's a bit like St Thomas and St John...go to one for the fancy restaurant and shopping (if you still believe there's deals in such places) and the other for peace and quiet, awesome beaches, and a laid-back soak in the sun and get to know each other all over again sort of place. We will definitely be back!

We thought about booking on a recent visit. We stopped in to check it out for future reference. The receptionist was lovely and showed up a variety of rooms available on the complex. Property has such potential. The pool currently has a leak and was not operational. Rooms appear to have not been used in some time. Updates are being done. 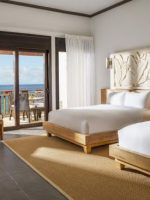 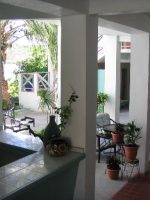 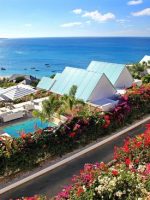 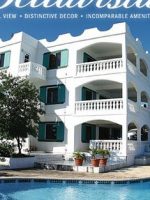 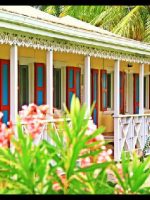