Families will appreciate the chance to really spread out at this budget-conscience downtown Anchorage hotel. The Clarion Suites offers rooms with two queens or two kings, each with an extra sofa bed, living room, microwave and refrigerator. There’s also a pool, spa, hot tub and free continental breakfast, making this Clarion Suites a desirable destination for families visiting downtown Anchorage for more than a couple of days. A convenient downtown location, at an affordable price with free parking, means families will enjoy exploring the Alaskan capital on foot before or after a cruise, or while on a special great northern getaway by rail.

The Room was Huge

Spent our first two nights in Alaska at this hotel before heading North. The hotel lobby was nice and the staff freindly and helpful. The room was a bit outdated decor wise but it was very roomy and comfortable. There was a small kitchen area with microwave, sink, frig and coffee maker. A sitting room with a desk, couch and tv and the bedroom with comfy bed and tv along with dresser and chair. No issues with noise. I regret we were so tired from our flight we didnt get the chance to use the pool. Although we missed breakfast the firt morning we did eat there the next day...it was well stocked ( including eggs, sausage and bacon) and we took a couple yogurts and piece of fruit for our long drive that day. All in ll a nice stay. Im afraid I forgot to take photos.

My wife and I were in Anchorage this past week and after several years of staying over at the Hotel Cook We decided to try and different hotel since the Cooks vet prices went up.

So we arrived at the airport and gave the hotel a call to get the shuttle and it arrived pretty fast like within 10-15 minutes as I think he was at the hotel so from there was pretty quick. Got to the hotel and got checked in.

Got to our room and right off we started to have issues. I noticed it took me 2 times to get the door to our room to unlock. I thought perhaps it was just me so I ignored it. We went out to lunch right next door at Benihana's (Great boat lunches!) and then came back to grab our stuff and again I was having issues getting the door to unlock so now I figured maybe it was a bad keycard so I went down to the desk to ask for a new card and rather then swap the card out she just recoded the key and handing it back to me. that did seem to then open the door.

We then went out shopping and when we came back again was having door issues so I went down to the front a second time and again the clerk recoded the key but that again did not work so I went down for a 3rd time and asked for a new card this time. He gave me a new card and same issue so finally on the 4th trip to the front he had a maintenance guy come up with me. Now we did at some point manage to get the door to unlock but clearly there was an issue with it and they looked at the lock for a good hour or so trying to get it to work properly. They finally got it half working but you had to turn the handle in a certain way. Not a great solution and one where we should have been offered a new room.

Later we got to sleep and later I woke noticing I was quite cold so I turned up the thermostat some and went back to sleep when I awoke later I was still just as cold. Went to the heating unit and it was pumping out cold air so we tried turning it all the way up to 90 which was the max and even then no hot air and it was set properly. So when we went down for Breakfast I complained again to the front about this new issue. This time they sent the maintenance guy up with me and he confirmed it was not heating. So they asked when they could get in and I told them our schedule and advised the front when we left so they knew they could get in to try and repair or change out the unit. Later I got a call from the front while we were out shopping and the conversation I felt was quite rude.

She advised us that it was decided it would be better to move us to a new room (FINALLY!) so I said we agreed as we could not stay in a cold room for the rest of our stay. But the rude part was the clerk made it sound like she was worried about the room being cleaned that day and was trying to get me to return to the hotel to move interrupting the things we had planned for the day. I advised her that we were shopping and would return when we were done and she was trying to indicate that the maids left at 4 so it had to be cleaned before that and I said well tough they would have to clean it the next day as this is our trip and I am not running around just to accommodate them when realistically they should have moved us the night before with the lock issues. But common sense says that if they are having to move us then the room is not going to be rented out that night anyways otherwise they could have just left us there so made no sense why she was so worried about it being cleaned that day.

When we returned back to the hotel I had to wait for the on duty clerk to come to the desk unsure why I had to wait so long but when she came to the desk I advised her that we were suppose to be moving and she had to find where we had been moved to as the morning girl apparently checked us out and moved us even though we had not yet moved our stuff over. I then asked the girl if we can be comped for the first night being all the issues we had to endure and she refused and said the best she could give us was 10% off the room. At that point I was tired and just took it as was too tired to argue with her.

Now I know a few years ago we had an issue at the Cook regarding BB's and the Cook knows how to handle issues that arise. Not only did they clean the clothing we had been sleeping in to make sure the things did not move with us but a day later the hotel sent up a tray of fruit and cheese and bottle of win their own doing we never asked for it but was nice of them and then when we checked out they advised us they were going to comp the first night. This is how the Cook handled a guests negative experience and the Clarion should have handled it just as well maybe not the wine but the comp should have been offered for us having to endure a cold night in one of their rooms!

We did get moved the new room was fine only had a minor refrigerator issue but when I reported it to the maid she found that it was just merely he unit had become unplugged she plugged it right back in (was behind the unit) and it was fine after that. No more issues cropped up after that and stay was fine.

Breakfast was OK was eggs and Sausage and Bacon and Hashbrowned potatoes. They also had fruit and toast and waffles and various cereals and your normal drink. After a week got a bit old could maybe have used some variety but at least it was good.

When we checked out I advised the clerk that I would be reviewing this and told him that based on what transpired on that first night that we should have been comped for that night as it wasn't just one issue or one trip to the front desk but several issues and multiple trips to the front desk! A comp under these circumstances is not to much to ask for! Wasn't asking for the entire week to be comped just that one night!

Shuttle ride back to the airport went fine and off we flew to return home.

So except for the first night over all the stay went fine, but the staff needs to learn better how to properly handle things that crop up like we had on the first night it should not have taken 4 trips to the front to get someone to look at the door lock and a cold nights stay should automatically be considered a comp when it is cold season as people want heat when cold season not cold air like we had.

But the first night is why I can only give it a 3. Had we been comped the first night I would have given them 5 but how the staff handles issues like this is a factor in my 3 star rating.

The maids were great though as we typically only have our room cleaned if needed but the maids made sure when we came over to their cart to give us what we needed such as toiletpaper and tissues and such they always got it right away! Friendly maid staff!!

On a side note I have checked yes for restaurant. Bare in mind the hotel itself does not have a restaurant but right next door in the same parking lot is Benihana which is great for family and kids so that is why the yes. Not connected but same parking lot area 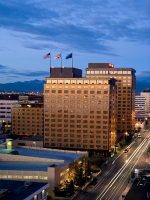 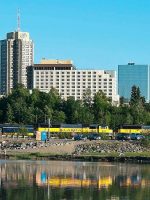 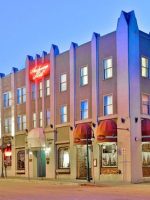 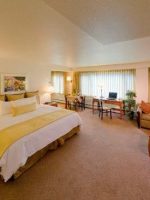