Comfort Inn South Forest Beach is just around the corner from Coastal Discovery Museum, The Sandbox Interactive Children’s Museum and Harbour Town Lighthouse. Other points of interest include the Tybee Island Museum and Lawton Stables. The hotel has 153 rooms. Each room includes free high-speed Internet and adjoining rooms. This Hilton Head property also has a tennis courts, fitness center, swimming pool and nearby golf course. Trattoria Divina, Kenny B’s French Quarter Cafe and Reilleys Grill and Bar are all kid-friendly eateries that are also worth looking at and are close to the hotel.

We usually stay in Savannah on our bi-yearly trip between our New Smyrna Beach, FL condo in the winter and spring and our Great Smoky Mountains cabin in the summer and fall. We had stayed one night in Hilton Head several years ago and decided to give it another try. Back to Savannah next year. Traffic circles still bewilder my poor old brain and it took three of them to try to find this property.

The hotel lies in the middle of what appears to be a giant time share facility. As others have indicated the hotel is not located in the same building as reception or the included breakfast. We arrived at the hotel and were greeted by a maintenance man who attempted to give directions to reception. We wandered around several streets before happening on reception. It went smoothly and we surrendered our 25,000 frequent IHG points for a $70.00 a night room. Poor choice on my part.

The building is tired, the hallways damp and cold due to areas being open viewpoints of the "lagoon" and the elements. The room was satisfactory and appeared to have been recently renovated. The AC had a constant fan feature that eliminated any cycling sounds during the night. The flat screen TV came with no printed channel guide, but we made due. We did not partake of the included breakfast in the other building and decided to hit the road early. I didn't want to take the chance of getting lost on the property although a shuttle was offered from the hotel building to the dining hall.

An employee did come on duty in the evening and sat at a desk in the hotel building. I think she was selling time share units.

Never again. We have had better experiences in tourist hotels in Cambodia than this spot.

2 couples were visiting Hilton Head as tennis tournament participants, and selected the Holiday Inn Express. We were quite pleased that we chose this hotel. Upon arrival we were splendidly welcomed by Yolanda at the front desk. She set the positive tone for the several days we stayed there. The other front desk employees were similarly courteous, and I believe this came from the concern and professionalism of Kathy, hotel manager. The breakfast staff ladies were quite helpful and efficient. Breakfast area was well-run, and a nice assortment of food and drink was provided; including pancakes, pastries, bagels, hot/cold cereals, beverages, assorted fruit and more. The hotel is conveniently located near shops, beach, restaurants, etc. and the grounds are pleasing. Our room was nice, not spectacular, with a lovely view of the pool and small lake. When we had one very minor problem with the shower head, and need a couple of items, the desk notified maintenance who arrived within a few minutes to rectify our concerns. Therefore, we can highly recommend the H.H.I. Holiday Inn Express, thank them for their assistance in making our visit a happy one, and wish you a wonderful stay on Hilton Head. 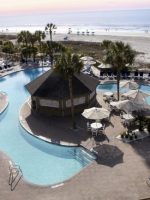 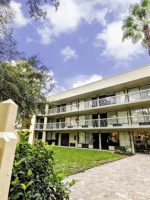 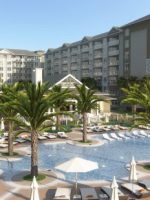 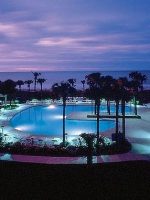 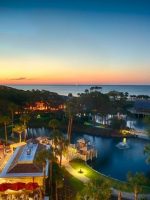