Courtyard Nashville at Opryland is a wonderful property for families with children to go. This hotel is within 10 miles of the Bicentennial Capitol Mall State Park, Downtown Nashville and Tennessee State Museum. Other points of interest include the RCA Studio B and The Hermitage, Home of President Andrew Jackson. This 3-star hotel has 94 rooms; it also has a tennis courts, swimming pool and fitness center. Courtyard Nashville at Opryland dining options include free continental breakfast and on-site restaurant. Bolton’s Spicy Chicken & Fish, McNamara’s Irish Pub & Restaurant and Pied Piper Creamery are all family-friendly eateries that are also worth looking at and are close to the hotel.

This Courtyard by Marriott is owned by the Opryland Hospitality company and the experience was not what we have come to expect from a Courtyard. One of our group had an issue with their shower (it was barely working)...they informed the front desk early on Saturday morning (after the first time trying to user shower) and were told that the issue would be fixed. When we returned to the hotel, late in the evening, the shower had not been fixed. They spoke with the Front Desk, once again, and were told they would take another look. After a couple of hours, they were told there was nothing to be done (after they had all day to fix it). Upon checkout, the guest requested a discount or some sort of "compensation" for the trouble and all they got was a "sorry".

Also, when we would gather in the evening, for drinks, etc., if anything was being cooked in the kitchen, the fumes were almost unbearable. Evidently, the exhaust fan wasn't functioning properly and it made it very difficult to gather (we were a group of 21). One guest reported that housekeeping didn't replenish their coffee.....we didn't have a laundry bag in our room, etc. While the place looked nice and shiny, there are some issues and, as I said, it was not the "Marriott" experience we were accustomed to. On a good note...the bartender made really good drinks!

UPDATE: It's too bad that the GM wasn't made aware of the issue. Upon arriving home, I sent an email to the Sales Manager, who forwarded to the GM. I received a personal phone call with a sincere apology. Plus.....the group members with the shower issue were given a refund of one night's stay + tax. It's too bad the staff didn't make her aware of the issue.....as she was going to personally visit the room in question and ensure the shower was fixed. So, it looks like the staff just needs a little more training in communication and customer service. She was also going to check into the issue with the preparation of food and why the fumes were so overwhelming.

We would stay here again, knowing that our issues weren't dismissed entirely.

To be expected. Standard Marriott, nothing special.
There ARE fridges and microwaves in the rooms, which is nice. The room kinda smelled like sweaty gym locker room and could not be fixed by blasting the AC and opening the window.
Bed was comfy. Shuttle was free to Opryland which was great. Free parking, yay! 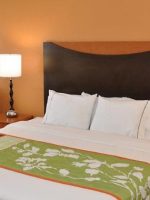 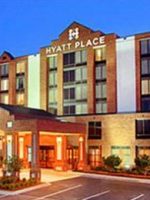 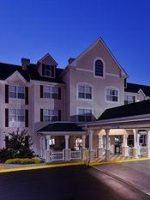 The Inn at Opryland, A Gaylord Hotel 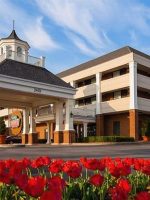 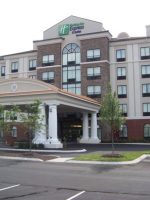 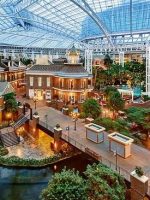