The Courtyard San Diego Downtown hotel was once an old bank and has been renovated and refurbished to offer your family a gorgeous stay. Vaulted ceilings, contemporary dÃ©cor and Italian architecture will make you feel like you’ve stepped back in time. The hotel is conveniently located in the Gaslamp Quarter, putting you right by all that downtown San Diego has to offer. In your room, you’ll find a mini-fridge and microwave for all your snacking needs. Free Wi-Fi is provided throughout the property to keep you connected. The onsite restaurant, The Lobby, offers delicious and convenient meals for the whole family at breakfast, lunch and dinner. The fitness center is available for guests who want to stick to their routine on the road, and the 24-hour market stocks snacks and toiletries.

We stayed at the Marriott courtyard after arriving from our cruise. The hotel is in a historic building that was a bank. Beautiful architectural details and they incorporated a lot of the old banking pieces. The lobby is all marble with polished brass accents from the bank. The location is steps to the Gaslamp district with great bars and restaurants. Next door is the house if blues. Hotel is very clean and staff is very friendly and accommodating. Room is large and beds are comfortable. Bedding is nice and soft. A/C works great. Ask for a tour to the vault room in the basement!

Lately, due to a busy schedule, I’ve been taking “staycations,” that is, short vacations in the city where I live. San Diego is a tourism mecca, so why not? The location of the Marriott Courtyard Downtown, on the fringes of the city’s entertainment center--the historic Gaslamp Quarter--is perfect: far enough away from most of the late-night and early-morning rowdiness to guarantee a decent night’s sleep, yet within a two or three-minute walk of the heart of the Gaslamp.

From the time I checked into the hotel until I left, it was obvious that the management there runs a tight ship. The building and accommodations are immaculate, and the staff--from the housekeepers to the front desk to the valets--are exceptionally professional and vigilant, proactively offering assistance (or merely friendly greetings) many times. Security outside and inside the hotel is excellent, and an important consideration due to the prevalence of homeless people in the downtown area. I love old, historic buildings and had a special reason for wanting to stay here. Back in the day, it was the home of San Diego Trust & Savings Bank where my mother had an account. As a child, a major treat for me was visiting the massive bank vault in the basement. I was thrilled to see that this handsome building has been so lovingly preserved. The lobby is grand and has ample seating and dining areas, and many different amenities, including a pool table! From what I was told, historic tours of the hotel by the bellmen are available on request, subject to availability.

My only disappointment, rectified a short time after I checked in, was the room to which I was originally assigned. It was a generously sized and tastefully decorated. Unfortunately, it was an interior room that, even during the middle of a cloudless, hot day, was as dark as a cave. The view (through wired glass) looked out onto the windowless backs of adjacent buildings and an ugly array of mechanical equipment down below. A tiny patch of sky was visible by looking up…way up. This might have worked for someone who wanted total solitude or who was light sensitive, but not me. By nature, I am low maintenance and not a complainer, so I unpacked and took a shower, deciding to grin and bear it. After a while, only looking for additional information, I went down to the front desk and found a clerk other than the gentleman who originally checked me in. She introduced herself as Monica. I tactfully inquired if, on my next stay, it might be possible to get a room that overlooked the street. Immediately, over my protests that I didn’t want to be a bother, Monica began searching her computer for another room and within a few seconds located one that she described as a large, exterior, corner room and “one of her favorites.” Monica, who has a bubbly personality, is a true “people person” and a great asset to the hotel. She commented with great sincerity, “We want all of our guests to be happy!” I totally believed her! Of course, I accepted Monica’s offer and, as described, the new room was light-filled, two floors higher than the original one, and boasted a panoramic view. It was exactly what I had hoped for, and even exceeded my expectations. For those reasons, I suggest that visitors who come to San Diego for the sunshine request an exterior room at this hotel if one is available.

The two rooms I experienced (including the one I was moved out of) were large, comfortable, immaculately clean, and otherwise tastefully decorated with dark-toned furniture and attractive carpeting that reflected the building’s historic past. A large computer desk was useful to me. Attention to detail, such as two mounted rolls of toilet paper with the loose ends artfully folded into origami-like points, was evident everywhere, with a couple of odd omissions, like no soap dish next to the sink for the bar of hand soap. The halls and the rooms were permeated with a fresh, lemony scent that I loved. The bathrooms were large and equipped with a tub/shower combination, though I would have preferred that at least one of the mirrors be equipped with better lighting. The televisions, which were also large, offered a wide variety of channels, including HBO and Netflix. An on-screen message welcomes the guest by his or her first name. That's a great touch! The beds and pillows were comfortable. The Wi-Fi was fast. I especially liked the convenience of a small refrigerator and microwave that appear to be provided with every room, though they are housed just above the floor in a cupboard-like piece of furniture that makes them somewhat difficult to access. The heating and air conditioning systems worked well and were relatively quiet. This is especially important with the exterior rooms because they can overheat quickly on a sunny day due to the large expanses of window glass. The light-blocking drapes were helpful in this instance. Overall, I thought the rooms were nicer than those at the somewhat overrated Westin St. Francis in San Francisco where I’ve stayed twice, mainly because of its central location. The St. Francis is rated a Category 6 and is as busy as Grand Central Station, whereas the Courtyard Downtown (San Diego) approaches the ambiance of a boutique hotel and is classified by Marriott as a Category 5. I am looking forward to staying at the Courtyard Downtown again. 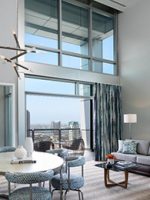 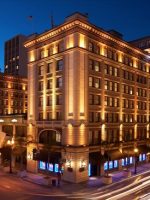 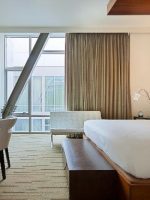 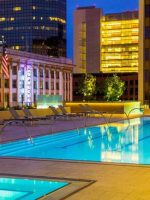 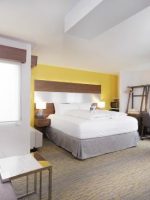