The Fairmont Empress stands tall directly on Victoria’s Inner Harbor and is considered Canada’s Castle on the Coast. It opened in 1908 as a hotel along the Canadian Pacific Railway and was designed by the same architect of the capital building found across from the hotel. Following a $60-million renovation, this grand dame of a hotel launched into the modern age with gorgeous modern updates, artwork and amenities. Guests are now greeted in the lobby by a breathtaking, 250,000-crystal chandelier that weighs in at two tons! Every evening, the crystals reflect the colors of the sunset that shine through the giant windows in the lobby, casting an entirely different atmosphere into the lobby nightly.

The guestrooms, suites and Fairmont Gold rooms drip in historic luxury with a modern twist. The high ceilings remind families of how hotels were once made, but the bright colors and modern amenities keep the Empress in the current day. Families will love the indoor pool and provided bicycles for touring around town.

The Empress is ideally located within walking distance to everything Victoria has to offer. When staying at the Empress, families can take a less-than-five-minute walk from the hotel to visit the Royal BC Museum, IMAX Theater, Victoria Bug Zoo, Inner Harbor, Miniature World and numerous other Victoria hotspots. Kids can also experience a Prince and Princesses Afternoon Tea, explore the hotel on a scavenger hunt, and meet the hotel’s resident marmot, who lives outside in the gardens.

The Fairmont Empress is literally located in the epicenter of Victoria, offering the most ideal location for families who are also seeking luxury, history and modern amenities.

Note the wide hallways and high ceilings in many of the guestrooms, which come from another era. In the 1900s, it was considered poor etiquette to entertain in your guestroom so benches were placed in the hallways in order for guests to socialize and have tea. The hallways were also built extra wide because of the large skirts women wore during that time. It allowed them to move freely through the hallways in their finest fashion.

The guestrooms feature one king, one queen or two double beds, and a small sitting area with two chairs. There is a flat-screen television, coffeemaker and tea kettle and a stand-up shower in the bathroom. Some guestrooms do feature a shower/tub combination so be sure to request that at booking. The guestrooms can accommodate between three and four people.

Fairmont Gold Rooms
This upgraded level of guestrooms and suites was reinvented in 2017. Guests who stay in the Gold Rooms also have access to the Fairmont Gold Lounge and Terrace, where there is food all day long and an honor bar. There is private check-in and the rooms feature one king or two queen beds and a large sitting area. One- and two-bedroom suites are also available on the gold level. Complimentary Wi-Fi is also available in these upgraded rooms only.

The road to Tofino. "The Castle on the Westcoast"

On a short road trip to Tofino travelling with an Aussie friend with the opportunity to show Vancouver Island and the only choice to stay when in Victoria on this adventure was simply the Fairmont Empress.

Having already having stayed at most Canadian Pacific Hotels historic properties, the Fairmont Empress was of course the westcoast gem and beckoned my first stay.

I utilized a 'locals rate" which included parking ( in and out privileges), a beautifully appointed room on the fifth floor with two queen size beds and standard Fairmont expectation of the whole experience.

This hotel, steeped in British Columbia's history was also was 'literally the crown' experience of the stay. We were greeted in a welcome and friendly manner and check-in was expeditiously taken care of, including the small chat of the awarenesses of the 'roadwork' on the way to Tofino - in ensuring we were aware of the delays on the way. The refurbished hotel looks great and pays great homage to its regal namesake.

Although my stay was short, breakfast in the 'Q' dining room was hearty and hot. We were served promptly and with no rush.

The hotel services such as pool and jacuzzi were easily located and generous supply of towels, robes and slippers available.

The Fairmont Empress - surpassed my expectation and made a great impression to my guest in showing this small part of Canada before heading to Canada's wilderness and rugged coast.

Going here since I was a kid, still love it.

Really still a great place for tea and to visit. I used to live on the island would head up to Victoria a fair bit and loved to stop in at the hotel. Took the wife and kids for tea and sandwiches which was also great.

Indoor Pool
The heated indoor pool and children’s wading pool can be found within the Health Club and spa. There are lounge chairs and tables surrounding the pretty tiled pool area. Pool towels and bottled water are provided. The pool is open from 5 a.m. to 1 a.m. Children must be supervised at the pool at all times.

BMW Bicycles
Hotel club members are welcome to enjoy the use of BMW Cruise bicycles during their stay. Just ask the concierge about availability.

Kids Activities
This luxury hotel does not forget its youngest of guests. Children are given a scavenger hunt activity when they arrive at the hotel so they can explore and learn everything about the hotel’s history. Marmot (similar to squirrels or groundhogs) and honeybee watching can be arranged directly on the hotel’s property. Be on the lookout for Roger the Marmot, who lives right on the hotel’s front lawn and can be seen scurrying by at times! In-room movies can be arranged, as can a Prince and Princess Afternoon Tea.

All of the restaurants offer kids’ menus. Children 5 and under eat free off of the children’s menu and kids ages 6 to 12 eat at half price off of the regular menu.

Q at The Empress
Serving breakfast, lunch and dinner, this modern and artistic restaurant is a nod to Queen Victoria with a twist on royalty. Local seafood, lamb, beef and salmon are a few items on the menu. The Q is open from 6:30 a.m. to 9:30 p.m. daily. The Veranda, open seasonally, offers a great spot within the Q for outdoor seating. The Veranda is open from 11:30 a.m. to 10:30 p.m.

Lobby Lounge
This elegant space, which was the hotel’s lobby in the 1940s, is now where families will love to indulge in afternoon tea. Afternoon tea at the Empress has been world renowned since the first cup was poured in 1908. Tea seatings run from 11 a.m. to 3 p.m. daily. In the evenings, the Lobby Lounge turns even more elegant with classic cocktails, caviar and local seafood options.

Fairmont Gold Lounge and Terrace
Guests who stay in an upgraded Gold Room have access to the lounge and outdoor terrace area. This large, but narrow space runs along the front of the hotel and features breakfast items, canapes all day, an honor bar and the best views of Inner Harbor. There are plenty of places to lounge and relax inside or outside on a cozy couch by the fire or at a table.

The Best Time to Visit
Victoria has the mildest of temperatures in all of Canada. It never gets too hot or cold here. making it a great year-round vacation destination. May through September tends to be the busier time for this hotel, with January and February being a hint slower.

Getting There
Located on Vancouver Island, Victoria International Airport and the ferry port are both less than 30 minutes away from this hotel. Seaplanes and water taxis at Inner Harbor are located directly across the street from the hotel.

Getting Around
Victoria is a very walkable city. Families can easily walk to most of the things to do in Victoria. Taxis are also readily available in front of the hotel. 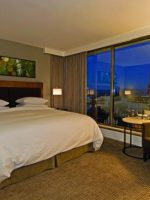 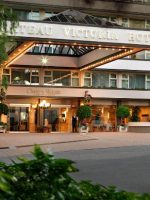 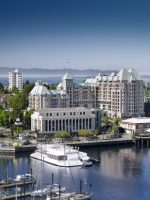 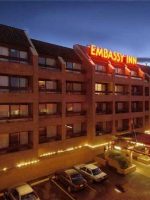 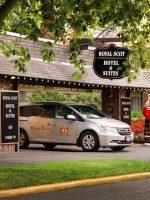