Located near Great Smoky Mountains National Park, this hotel is within walking distance to downtown Gatlinburg. The hotel has a stop on the Gatlinburg Trolley too. Families will love spending the day at the large outdoor pool with a waterfall or visit the indoor pool on a rainy day. The kids can swim, splash and play while the adults can lounge and relax on one of the surrounding pool deck chairs. There is an indoor putting green too for anyone looking to practice their swing. The comfortable guestrooms and suites feature a king or two queen beds, a mini-fridge, coffee maker and a flat screen television. Additionally, the spacious suites feature a sleeper sofa. Poolside rooms and rooms with a fireplace are are also available. Complimentary Wi-Fi access is available throughout the lodge so there is never a concern with staying connected to home, school or work. Families can enjoy breakfast in the Mountain Trail Cafe. Free parking is also available.

We found Glenstone on Trip Advisor. The bi-level pool caught our attention. My daughter and I took 3 boys ages 5-13 for a midweek fall break trip. We actually booked directly through the front desk because we had some questions the night before our arrival. Desk clerk was very helpful and nice. Check in process the next day was smooth. Our room was on the 3rd level on the back unit facing the picnic area. The room was clean and had everything we needed. It looked like it had been recently remodeled. The bathroom was small but clean. Probably should have a fan in there to help clear any moisture after showers. That might cause some mildew issues in the future.
The boys loved the pool. There were plenty of pool towels available. The restaurant is undergoing a remodel. We walked down the street for breakfast at a pancake house. There is also a trolly stop directly in front of the hotel.
We loved the location and were able to avoid most of the main street in Gatlinburg by going up around and coming out at the light across from the Aquarium. Parking is a little tough if you are coming in late in the evening.
Overall we enjoyed our stay and would stay again

So awful that I'm taking the time to write a review

Not even a motel....NO Hot Tub but DOES HAVE PUBIC HAIRS and a FLOATING SHOWER CURTAIN...Dirty, unsafe, lies...So I expect pictures to be much better than the actual property in real life but this borders fraudulent. No restaurant (as advertised), no hot tub (as advertised), MOTEL NOT HOTEL (as advertised), watered down coffee with powdered creamer ONLY served from 7-11 am, bouncing elevators that trap you and literally won't open, doors that are missing locks and when I asked about another room I was told they are all the same...and the "balcony" was the UNSTABLE SHAKING RAILING that circles the upper level...FRONT DESK SAID ALL ROOMS ARE THE SAME AND THEY WOULDN'T MOVE ME TO A CLEAN AND SAFE ROOM..i saw in person the surrounding HOTELS and even MOTELS which were all so much NICER and CLEANER... I don't even have high standards...If there's coffee and donuts I'm happy but this was next-level TRASH....Chairs on the balcony were ripped and torn... Bathroom fan didn't work and was filthy with what looked like years of dirt 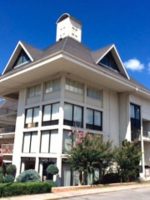 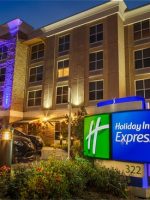 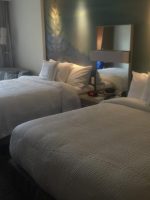 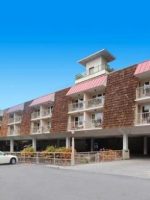 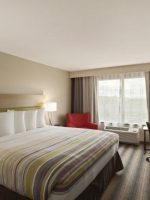 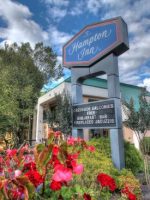