For a classic Florida beach vacation within a short hop of Orlando’s many theme park attractions, Cocoa Beach — about 1.5 hours east of Orlando — makes for an excellent option. This classic Hampton Inn property originally opened in 1999 and is located about 100 yards from the ocean in a quiet residential area just a few blocks south of the famous Ron Jon Surf Shop. The location puts you in the middle of the action while staying nicely removed from the more crowded stretch of sand farther to the north, near the Cocoa Beach Pier.

The big draw for any stay at this hotel is the wide stretch of car-free beach accessed by a walkway from the pool. The beach is patrolled by lifeguards during the busier spring and summer months, when you and your family will likely spend the bulk of your days playing in the surf and enjoying long walks along the sand. Cape Canaveral and Kennedy Space Center Visitors Center, with its many attractions, are about 20 minutes north of here. And you’re also close to the cruise port (the Hampton Inn is popular with pre- and post-cruisers, as you’d expect).

A hot breakfast is included in the room price for everyone in your party, which makes it easy to fuel up and set out to enjoy the ocean or the hotel’s heated swimming pool, located on the pool deck overlooking the beach. The 150 guestrooms are notably clean — your standardized carpeted mid-range hotel affair with dark wood furnishings, plus mini-fridges and microwaves for storing snacks and prepping easy meals. But what’s really nice about this property is that all of the hotel rooms have balconies (or patios, in the case of ground floor rooms). So even if you’re not down on the beach enjoying the surf and sand, you can still enjoy ocean breezes, partial views and the sound of the rolling surf.

For more information, read about Hampton Inn and Suites.

Of the Hampton Inn's 150 guestrooms, all of those excluding the first floor accessible rooms have decks and balconies for enjoying ocean views. Rooms on the ground floor open onto patios that overlook the pool or grassy lawns.

All rooms include mini-fridges, microwaves, free Wi-Fi, flat-screen TVs and coffeemakers. For connecting rooms, you can ask to connect a room with a king bed to a room with two queens and a queen sofa sleeper to accommodate an even larger family. And all bathrooms have shower-in-tub configurations with Waterpik showerheads and those curved rods that make group bathing more spacious. If you're sensitive to noise, request a room as far away from the elevators as possible.

King Bed Rooms
Rooms with one king bed can also accommodate a rollaway bed ($10 per night). Some have sofa beds, too.

...Unless you want to get the most for your money. I didn't rent a car. They have a private taxi service you must call ahead. They pick you up at the airport and take you to the hotel, no problem. Bree at the front desk was great. She remembered my name and greeted me everyday.I felt like a friend. The room was close to 300 sq ft. The balcony and view was great..hello sunrise. The bay on one side and the ocean on the other. You can walk to the beach and places to eat. A private trolley takes you to the Pier. Breakfast was varied and ok. Fresh cookies everyday.The staff was pleasant.The pool was never crowded.Three elevators.It was a good experience. I would go back. I lost my credit card, they found it, called and mailed it.

A bit dated, but great location and service

We stayed two nights at the Hampton Inn Cocoa Beach, as we flew in early to enjoy Cocoa Beach prior to our Royal Caribbean cruise. The property definitely shows it's age, but they have modernized parts of it and it had everything that we needed. It is old school motel-style- doors on the outside, but the rooms were fine and everyone slept well. The breakfast was okay. Service was excellent- very friendly and helpful staff. And, of course, the location was great- close to Ron Jon's, the beach, great restaurants, and the cruise ship terminals. I would stay there again!

Beach
Most families book at this hotel because of its good location, set back about 100 yards from the beach, which you can reach by a walkway from the pool. And if you like your beaches wide, uncrowded and car-less (compared to the auto traffic that's allowed on the beaches in Daytona and New Smyrna Beaches, to the north), you'll love Cocoa Beach.

The Hampton Inn has a selection of beach buckets, boogie boards and other various toys left behind by previous guests that you can request to borrow to bring down to the beach. And a kiosk down on the sand operated by an independent business rents two lounge chairs and an umbrella for $32 for the day.

Pool
The hotel's pool (open daily from 9 a.m. to 11 p.m.) is a simple, heated lagoon-style pool that's 8-feet at its deepest, with no lifeguard surveillance. And there are plenty of plastic lounge chairs and umbrellas here to go around. There's an outdoor shower by the pool, too, for rinsing off the sand before you head back inside to your room. While the Hampton Inn itself doesn't rent surf boards, SUP boards and sea kayaks, the famous Ron Jon's Surf Shop just a few blocks north of here rents all of those things, as well as wet suits (for the colder months of winter), beach bikes, skim boards, beach carts and other toys.

Complimentary Breakfast
Breakfast, offered free to guests and served daily between 6 a.m. and 10 a.m. in a casual dining room off the lobby, is the only meal available on property. The spread consists of bagels, muffins, cereals, juices and coffee, as well as a few hot options that might include pancakes or sausage and scrambled eggs.

On the Run breakfast bags with grab-and-go items such as muffins, breakfast bars and bottled water are an option if you're headed right out the door in the morning, and are available free of charge from Monday to Friday.

Sweet Shop
There is also a small convenience store called the Sweet Shop in the lobby that's stocked with sunscreen and beach toys, as well as foods, mostly of the junk-food variety, such as candy bars, chips and sodas. You can sometimes find microwave dinners on offer here, too, for quick meals in your room.

Parking
Self-parking in a lit outdoor lot is free of charge (there's no valet parking).

Business Center
There's a business center with complimentary printing and photo copying and the hotel also has a notary public on site.

Fitness Center
The hotel's fitness center is on the third floor and has cardio and weight machines. Hours are from 8 a.m. to 11 p.m. daily.

The Art of Smart Timing
Cocoa Beach is a popular destination year-round, and crowds particularly swell during spring break in February and March, around Easter, over Memorial Day Weekend, Fourth of July and Labor Day. You'll get some of the best deals here and have the beaches largely to yourself during the shoulder season months of late-September and October into early November and again in January, April and May. The area sees many snowbirds migrating down from the northeast and Canada from after the Christmas holidays into early May. And weekends are often busy on the beach, too, with locals coming out to play and Floridians from inland areas like Orlando making the day trip for fun in the sun.

Getting There
Most guests at the Hampton Inn fly into Orlando International Airport, located roughly an hour west of the hotel and accessed by a relatively straight shot of mostly highway (toll road) driving. Orlando's airport has flights by all major national carriers, as well as many international airlines. Alternatively, you can consider flying into the much smaller but closer Melbourne International Airport (about 25 minutes away), with flights offered by Delta and US Airways from major cities in the south, such as Atlanta and Charlotte.

Getting Around
Unless you plan to spend all your time at the Hampton Inn, you'll want to consider renting a car during your stay for easy access to nearby restaurants and attractions, such as the Kennedy Space Center Visitors Center to the north. Car rental companies are available in Cocoa Beach, but you'll get the best rates by booking through other search engines.

Kids love to ride the Cocoa Beach trolley, which runs up and down the beach (including to Port Canaveral) and has a stop right near the hotel. The trolley operates Monday through Saturday from 7 a.m. to 9 p.m. and Sunday from 8 a.m. to 5 p.m. Kids under age 5 ride for free and it's $1.25 for adults, with discounts for seniors.

For Mom and Dad
If the kids are old enough to watch themselves in the evenings (the Hampton Inn does not offer babysitting) steal away for a sunset cocktail and to take in some live music at a classic beach bar a bit south of the hotel, Coconuts on the Beach (the trolley can be your designated driver). The people-watching is great, barstools perch right over the beach and there's a simple menu with things like burgers, crab cake sandwiches and fish reubens. The Hampton Inn has no spa, but if you're up for a couples' massage or something more exotic like aromatherapy or lomi lomi massages, you'll find good rates and service at Cocoa Beach Spa & Salon Studio. 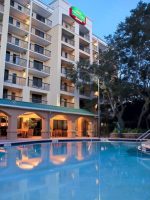 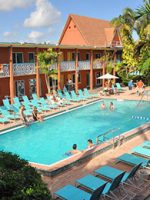 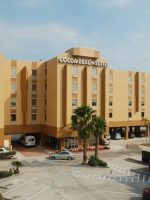 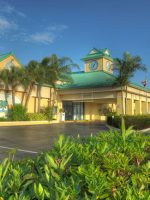 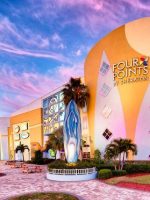