The Holiday Inn Express Park City features a complimentary continental breakfast, an indoor heated pool, laundry services and bike and ski storage. The hotel is on the Park City shuttle route taking families to ski resorts at Park City Mountain Resort, Deer Valley Resort and The Canyons. Historic Main Street is within walking distance including a variety of restaurants, shops and a movie theatre. Families can enjoy a variety of activities offered throughout the town including hiking, rafting, kayaking, hot air balloon rides and horseback riding.

Last time my husband and I stayed here in 2017 they had issues. Furniture big, old, dark like a Best Western. Noisy a/c. Since we were going to be in Park City I called to see if perhaps they had remodeled. I was told "we've had a complete update." I have no idea what this woman was thinking.
The lobby area and halls were new, the rooms were the same old bulky furniture, headboards were disintegrating, see.pics.
We were just finishing a long roadtrip which included no less than 8 HIE in 4 states and they were ALL bright, new with appropriately sized furniture. On top of the room issues, the breakfast had issues. On Memorial day they had no orange juice(sign stated that they had run out) but even worse, there was no coffee(only decaf). This sign said the pot was broken. Seriously, a hotel of this size without a backup coffeepot??
If we are ever in Park City again we will not be staying here again

Convenient location and plenty of shops and restaurants in the vicinity

The hotel was very clean and well run by the staff. Staff was pleasant and let me check-in early so I
could put my bags in the room. Very accomodating. Breakfast was very good and well stocked with
fruits and main course. 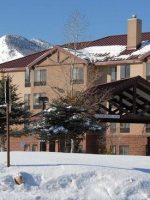 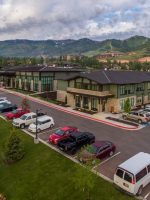 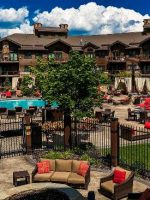 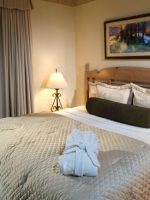 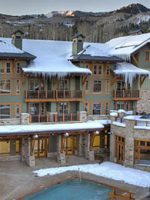