Hotel Bakoua looks like a luxury hotel in Martinique; it is not. It’s also not particularly family-friendly, and not many of its guests include children — regardless of the time of year.

It’s not a bad hotel; it’s just overpriced. Rooms, which start in the $200-range, are admittedly dated, with minimal furnishings, clunky TVs and spotty Wi-Fi service. Some, however, provide spacious balconies with lovely views of the ocean — highly recommended to make the most of your visit. The hotel’s infinity pool, beach and restaurants don’t disappoint either. And a location near a marina means you can easily get to Fort de France or embark on a catamaran cruise.

The hotel has a total of 132 guestrooms and six suites. Furnishings and decorations in rooms are minimal and admittedly dated, with old TVs. It's disappointing for the cost you pay, and quite misleading considering the hotel is advertised as a luxury property. Many of the rooms' views do not disappoint, however, and the bathrooms are spacious, with deep-soaking tubs. Bathing small children in the tubs may be a challenge, however. Cribs and rollaway beds are available for a fee.

Double Premium Bedroom
This room is best for families, with two double beds and a balcony or veranda. While cribs and rollaway beds are available, it may be tough to squeeze one in the room.

Suite
The suites have a separate bedroom for parents, privatized by sliding doors, but you will need to order a rollaway bed or two to sleep your children.

Josephine Suite
While this suite is the hotel's most luxurious offering in both design and space, it is best suited for couples. You might be able to bring in a rollaway bed or crib, though.

The hotel also offers a Premium Bedroom, Privilege Bedroom and Deluxe Bedroom, but all of these are best for couples.

We stayed 9 nights in July at this hotel. The setting and location were fabulous but everything needs to be updated or fixed at the hotel. In our room the coffee maker and the mini fridge never worked. We complained 3 times but gave up. While the infinity pool was spectacular 20 years ago it is now crumbling. The front security gate worked sporadically making it hard to get in or out. I will say that the room was always cleaned well. The shower was impossible to keep water from dripping on the floor. We could easily put up with these issues but the worst was the band that played every Thursday until 2:00 am. The music sounded as if it was playing in our room. Impossible to sleep. I find it hard to believe that we were the only ones to complain.
The hotel had such potential but needs LOTS OF WORK.

A DISAPPOINTING END TO AN ANNIVERSARY VACATION AND CRUISE

We arrived from a cruise ship just before 10.00 in the morning. The one receptionist on duty was frazzled and was trying to deal with four check-ins at the same time and had a brusque manner. Two days later, when we were waiting for our taxi to the airport, another receptionist effectively called us liars when we said a taxi had been booked, where was it? It appeared 15 minutes late 'because of the traffic', with son and grandad out for a ride taking up the best seats in the van.

Between those times, we concluded that the place could offer so much but needed a total refurb and plenty of staff training. When we eventually got into our room, we were well pleased with its location - 2 metres from the beautiful sandy beach, with sun beds, towels and palapas. The room had an verandah with shades from which we sat and watched the sun setting and the boats coming and going. But the sleeping area was cramped, once the king size bed was taken into account, with limited hanging space, and a bathroom that could ideally have been ripped out and new sanitary fittings installed.

Breakfast in the main dining room was fine - a good selection of hot and cold food and an egg station. The dinner we had there was very good, once we got the table we thought we had booked earlier in the day - a reservation the Md' argued had nevere been made until I threatened to go to reception, to get the day book to show him that it had been. Who needs a scene to get dinner - and another occasion when I was called a liar by hotel staff.

All in all a disappointment, apart from the beach, the warm sea and the swimming, and they are all courtesy of a higher power.

Beach
The hotel has a small, calm beach, with chairs and loungers strewn along the sand. Towels can be rented from a small hut at the beach, but be sure to return them after use each day; otherwise, a $15 charge applies.

Pool
The hotel has an inviting infinity pool that overlooks the ocean and harbor and features spectacular views -- particularly at sunset. It's very deep, however. If traveling to the hotel with children, bring water wings, floats or even life jackets for protection.

Excursions
Families may rent non-motorized water sports equipment at the resort, such as kayaks. The concierge will also assist in arranging local excursions.

Le Gommier
This is one of the hotel's bars, and it overlooks the infinity pool. The setting is casual enough that you can bring kids, who will enjoy the complimentary conch fritters delivered with your drinks.

Le Chateaubriand
In the morning, you'll find an extensive breakfast buffet here, with fresh meats, cheeses, fruits and breads galore. Made-to-order eggs, omelettes and crepes are also available. At night, the restaurant becomes a fine-dining experience, with plentiful portions of fish, chicken and steak. Try the rice pudding for dessert.

The Coco Bar
Situated in a hut on the water, The Coco Bar serves refreshing cocktails, plus sandwiches and salads. It's especially perfect for adults, though kids are also welcome.

All About the Extras
Wi-Fi
Wi-Fi is technically available, but it doesn't work well. Visit the lobby for the strongest service.

The Art of Smart Timing
The hotel is busiest mid-December through May -- the most popular time to visit the island of Martinique. Expect the highest rates at this time. You're likely to find more deals and less crowds if you visit in the summer or fall.

Getting There
The hotel is located just 20 minutes from Aime Cesaire International Airport. You can get a taxi or shuttle to the hotel, but a car is recommended.

Getting Around
You'll need a vehicle to get around the island and explore; parking is free of charge. However, there's also a marina just a short walk from the hotel, where you can embark on a catamaran excursion or take a ferry (10-minute ride, if that) to Fort de France.

For Mom and Dad
Head to Coco Bay for an afternoon cocktail on the water, or at night, grab a beer (try the local beer, Lorraine) at Le Gommier. 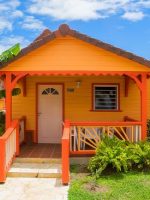 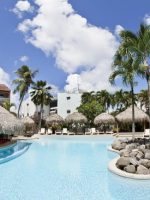 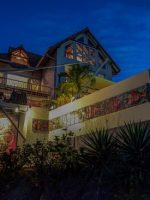 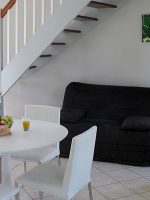 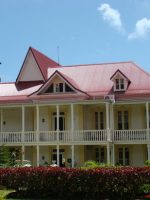 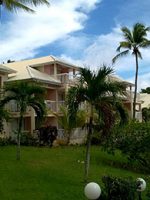