Located along four miles of the riverfront broadwalk, this Hyatt is also not far from the EverBank Field and the hotel provides a free shuttle there and anywhere within three miles of the hotel. Teens will love renting a bicycle for the day and pedaling around town and after a day of exploring, families can spend some quality time at the outdoor rooftop, heated pool. The kids will love to swim while the adults enjoy the skyline view. The comfortable guestrooms and suites feature a king or two queen beds, a mini-fridge and flat screen television with video on the demand. The spacious suites feature a separate living room area with a sleeper sofa. Cribs and rollaway beds are available upon request. Complimentary Wi-Fi access is available throughout the hotel so both kids and adults can stay connected to school, work and home while visiting Jacksonville. There are several onsite dining options for families seeking breakfast, lunch or dinner.

Our room reservation had a hiccup but we were given another room (sort of comperable) and free breakfast for our stay. We did have a couple of issues with the room but the staff were quick to make repairs. Overall our experience was postive.

I stayed at this hotel for a training class followed by a conference. On my third day there I went down for breakfast and when I returned to the room my key did not work. I went down to the front desk talked to Drew who gave me new keys. I tried those and they did not work. I called down while in the hallway and Drew brought up a new set of keys that worked. Later that afternoon that key stopped working, I called the manager and spoke to Jerome who offered me free breakfast for a day. But the matter persisted, the hotel staff never showed up when promised to fix the lock. Finally around 6pm I was moved to another room, because they were not able to fix the lock. The staff was supposed to come to my room to assist with moving my items, they were a no show so once again I went back down to the front desk, I spoke to a manager that sent someone up right away, for the inconvenience the manager gave me 2 $15 coupons for the Market store... which the store cashier would not honor for the full price. They fourth day there the key stopped working again, but the replacement key worked just fine. I spoke to a staff member who said broken locks is not uncommon at this location. This is not something you want to deal with when you are paying to attend a training class and conference. 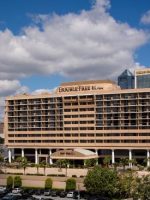 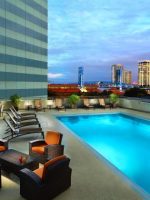 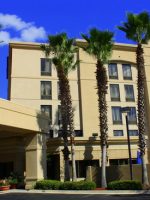 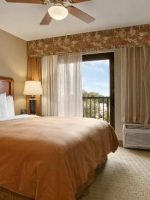 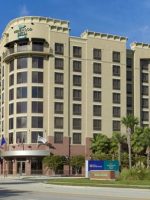