Just minutes from Salem and all of its historical sites, this hotel is a great place for families looking for some fun. Free breakfast is included along with an outdoor pool. A crib can be brought in to any room for the youngest family members. The onsite restaurant serves American style food for lunch and dinner, and there is an available children’s menu. Guestrooms appropriate for families have two double beds and can accommodate up to five guests. Rollaway beds are available. Air conditioning, refrigerators, and microwaves are all included in each of the guestrooms.

Rooms were horrible. Asked for smoke free room. It stank of cigarettes and weed. My elderly mother's bed looked like it had traces of blood and sex stains on the sheets. The lady at the desk accused my mother and I of leaving the stains. There were pimps and hookers in the room across from us and I saw a drug deal. Worst hotel experience ever. Do not bring your children to this hellhole.

This is now in 1st place for the worst motel we have ever stayed at. We went to the motel when we could not find anywhere else. Because it was Oct. and near Salem MA. they wanted $199/night- right now I checked and it is listed for $89 on alll the booking sites for Nov. Anyway, it looked so bad we said we were leaving and the clerk said she would give us a key to go check "One of the newly renovated " rooms. We looked and because we had no options, I went back in to book it. The clerk said, "Good news, that room has only one bed so It will cost less." When she gave me the receipt, it was for $199 plus tax. I asked and she looked at her computer screen and told me the owner must have raised the rate after she checked while I was looking at the room. We literally went to the room, and pushed our bags in and left. When we got back we were not happy to discover that an AC/DC tribute band was playing at the restaurant/bar about 30 yards from our room. The windows weer vibrating and you could feel the bass or drums in our chests. They played until 1 am. When we were able to examine in the morning the room, I found and took pictures of the paint peeling on the wall above the heating unit, the wall was damp which explained the moldy smell, holes in the walls by the bed, bathroom and door, paper garbage on the floor behind where I had to pull out a piece of furniture because the outlets did not all work an we needed to plug in devices, the shower controls had a large gap around where it was supposed to connect to the shower, carpet not reaching all the way to the wall, etc. On the way down the stairs since it was light out I took pictures of the rusty railings and the holes in the metal stairs. They had a free breakfast which we were, in all honesty, afraid to try since the rest was rundown, rusty, damp, moldy, etc .And remember- we had one of the 'newly renovated" rooms In fairness, I contacted the corporate office and a manager from the motel called me. He asked for the pictures, apologized for th band- not much he could have done but it would have been nice to know we couldn't go to sleep until 1 am. Before I had even sent the pics I got an e-mail saying they were crediting back 30%. So obviously he had already made that decision and we are happy to have gotten something back but over $140 for that place is gouging and the worst motel experience we have had in 41 years of marriage.... and we once slept in or car in a rest area outside of Williamsburg, VA. 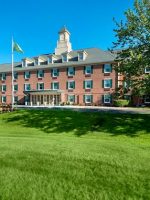 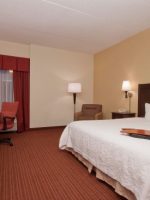 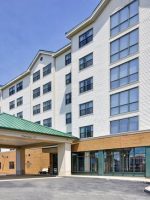 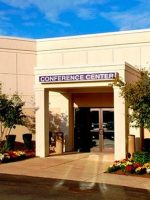