You can’t get closer to the beating Latin heart of San Juan than the lobby of La Concha on a Saturday night. A DJ sets up shop and fashionable puertoriquenos from across the city descend upon the hotel for the hottest nightlife scene in the city, with women in barely-there skirts and men with open shirts and plenty of gold chains. It hardly seems like the setting for a family-friendly vacation. And yet, when all of the glamour of a Saturday night fades, La Concha is incredibly well set up for families, with a level of luxury that makes traveling with the kids easy, including exceptional service and plenty of amenities, both inside and outside the rooms.

The pool area itself is a wonder to behold, with a two-tiered pool with a cascading waterfall in-between, and fountains that shoot up at random intervals to the endless amusement of kids. Despite the resort’s cache, plenty of kids can be seen splashing around the pool area. Down a terrace from the lobby, there is another, smaller pool that caters more to adults — and down from there is the signature clamshell of the resort’s beachside restaurant, and then the beach itself, one of the most beautiful on the island.

All of it adds up to a pampered existence that offers the best of the both worlds to sophisticated travelers — with plenty of amenities for the family during the day, and all of the decadence of San Juan’s nightlife when the kids go to sleep.

La Concha has 483 guestrooms, most of which are admittedly on the small side. But they more than make up for it with drop-dead gorgeous views of the white-sand beach and Caribbean-blue ocean below. The rooms themselves are styled within, and offer sleek white furniture with turquoise accents. Beds are cloud soft, closet doors have frosted glass, and wardrobes sport nickel drawer pulls.

Suites
The suite tower, with 235 suites, features suites of varying sizes, many with a king or two queens and a sofa bed. There are also Spa Suites, with whirlpools and spacious balconies. Suites come with fully equipped kitchenettes, giant flat-screen TVs, iHome alarm clocks with iPod docks, coffee makers, ergonomic swivel chairs, and micro-suede hassocks. Aveda bath amenities and showers and tubs are offered in bathrooms.

Cribs and some connecting units are available upon request.

The resort is very well-located in Condado. The room was renovated and beautiful, with floor to ceiling windows and an ocean view.

The only cons were the slow service at the poolside restaurant and the loud, pulsating music in the lobby.

Alondra is the best!

And her nails are amazing! Alondra Asencio was a fantastic server and great conversationalist. She made great recommendations and made us feel at home. The poke bowl and yuca fries were a favorite. But we will remember this place for the excellent service! Come see her!

You couldn't ask for much more than the pool at La Concha, which is really two pools in one -- a quieter upper pool (with a secluded Jacuzzi tub for adults), and a more active pool, complete with fountains below. The two are separated by a steep, cascading waterfall (be careful with young kids). Neither pool has a real shallow end, so they are best for kids who already know how to swim. A separate pool on a lower terrace close to the beach, however, does have a shallow end where kids can stand up -- though this pool tends to be quieter and more frequented by adults.

Down from that pool is the beach area, which is a tiny bit of paradise, with palm trees fringing a Caribbean blue crescent of sand, covered with beach lounges with drink and food service. Despite the beauty of the beach, however, the waves here can be quite strong --children should be well supervised, and stay away from the breakwater at the far left end of the beach, where currents are particularly powerful.

Solera
La Concha has several family-friendly restaurant options. The most obvious is Solera, a casual open-air eatery that bleeds off the lobby into the pool area. During the day, it's an upscale pool bar with burgers, sandwiches and salads. At night, it focuses on more tapas-style meals perfect for sharing among adults. But many of the small plates are surprising hits with the kids, as well -- including Spanish croquettes, Asian pork dumplings, calamari sticks, and mini-pizzas. Solera shares space with Komakai, a sushi bar that caters much more to adults than kids. Think $16 sushi rolls with lobster tempura or yellowtail with spicy cilantro sauce.

Perla
A luxury seafood restaurant, Perla offers lobster, cod, scallops and more, along with steak and chicken entrees. If children are up for it, let them try something new here, otherwise reserve it for date night.

Free Wi-Fi is available throughout the hotel.

The Art of Smart Timing
Puerto Rico has an almost perfectly consistent climate, with temperatures hovering around the 80-degree mark year-round. The biggest crowds and highest prices are between Christmas and late March, while rates drop in late spring and summer. Even August can be surprisingly crowded however, since that's when many locals take their own vacations. Puerto Rico has a rainy season from about April to November, when showers are possible -- though for the most part, they don't last long. Days when it rains all day are few and far between.

Getting There
Flights to Puerto Rico arrive at Luis MuÃƒÂ±oz MarÃƒÂ­n International Airport outside of San Juan. Rental cars are available at the airport -- but most of them are located off-site, which means taking a 10 or 20-minute shuttle to pick up the car. Alternatively, you can take a 20-minute cab ride to the hotel.

For Mom and Dad
Best leave the kids home for a romantic night out at Perla, the dramatically situated restaurant inside La Concha's signature shell that has maintained its reputation as one of the top restaurants in San Juan. Diners are initially wowed by the setting -- a modernist ocean-inspired fantasy of white waves -- but are quickly won over by the food, which draws heavily from the local oceans with fresh plates of mahi mahi, halibut, and Caribbean lobster, heightened with bold Latin flavors.

After you've eaten your fill, head to the lobby to join the weekend dance party that transforms the hotel into one of the city's hottest nightclub scenes, with driving music and pulsing lights well into the morning hours. You can also step into the Casino Del Mar, one of San Juan's largest casinos, with 400 slots and 20 table games.

El Canario by the Lagoon 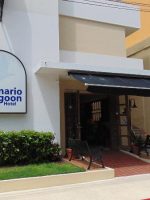 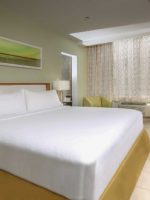 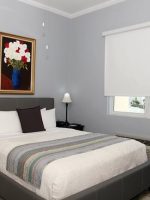 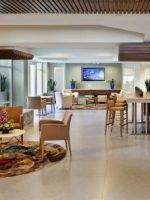 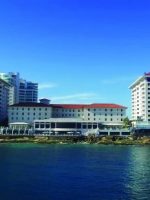 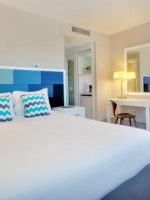