La Quinta Inn & Suites Fultondale Birmingham North is perfect for families looking for simple accommodations that are a great value. Rooms are on the larger side and include a microwave, mini-fridge, and coffee maker, as well as a large television and access to a high speed Wi-Fi network at no extra cost. Breakfast is served hot daily at no extra cost, and parking is always included in the price. Families will appreciate the hotel’s close proximity to main highways and local attractions.

We stayed here last year during a softball tournament and were coming back this year. We were unable to reserve anything online but I contacted the hotel directly and spoke with Lori ... she was able to accommodate our entire team. I have no complaints with the room or hotel in general.

Awful Awful Property...Do NOT STAY THERE! MANY ISSUES!

We stayed at the LaQuinta outside of Birmingham, Alabama on our way to Destin, Florida recently and stopped in because we knew how nice Wyndham Properties are since we own Wyndham. As we were checking in we noticed about 10 brand new boxed up air conditioning units sitting in the middle of the lobby but didn't really think anything of it. Well we were first put in a room on the 2nd floor and as we walked in the room, it smelled musky and was warm. The bathroom had holes in the walls, the blow dryer base was hanging on the wall but the actual blow dryer was missing. The ceiling had pink stains and had several moldy spots. Then as we were turning on the tv, we noticed a few cockroaches running up the wall next to the mirror. My small kids freaked out so we went back down to the lobby and asked them for a new room and then also a second room since there were 3 adults and 2 small children. This time they put us on the third floor. One room in the front of the building and one room facing the rear of the building. My 5 year old son was staying with me in my room and my wife and my mother-in-law and 2 year old daughter were staying in the other room. The lady at the front desk asked us if we would mind if the guys could come change out the air conditioning unit while we were up there that night. We told them we didn't think it was a good idea since it was already going on 8 pm and we had just driven for 7 hours and had another half a day of driving when we woke up the next day. Plus, why would we be put in a room that needed the air unit changed out? Why wouldn't we be put in another room? But anyways, my son and I went in our room and it was completely awful but at that point we were exhausted and I needed to get to sleep. My son was so upset that I tried to call the front desk because of the disappointing room but no one answered the phone. The room smelled musky again but luckily no bugs on the walls. The bathroom was terrible. The front of the vanity was missing the piece of granite that goes all the way across it so all you saw was bare wood with liquid nail all over it. The shower rod was falling off the wall on both ends so the shower curtain wouldn't stay closed. There was no shower liner. The pictures were missing off the walls but you could still see the nails where they were hanging. The ring on the bathtub drain was missing and the ring on the sink drain was broken in half. There were stains on the ceiling again and mold in some large spots on the ceiling. My son was so shocked and scared because the bathroom looked like a war zone from everything missing and broken that he left my room and went to stay with my wife in the other room. I decided I wouldn't let it bother me so I stayed in the room. The air really never got cold until about 3 am so I was sweating for the first half of the night and was smelling mold and mildew so I woke up with a pounding headache the next morning. I did forget to mention that my son wanted to go swimming and that was another reason that we stayed there because they had an indoor pool but when we went in the room, it was way overcrowded and a mess with towels and trash thrown everywhere and the water was so dirty that you couldn't see in it. It looked like it wasn't cleaned this year and reminded me of dirty lake water but he begged me to let him swim so I did for about 45 minutes. When we checked out the next morning t to get back on the road the lady was nice and said she would get the one bad room refunded and would only charge $30 for the room where everyone slept since we had so many issues. Come to find out through emails the following few days, the manager still charged me over $70 which I feel was wrong since I was told something different by the front desk manager when I checked out and we had so many issues between the 3 rooms we had been in. I believe the Health Department needs to be involved with all of this especially because of the moldy ceilings and bugs and air conditioning that doesn't work. Why were we put in rooms that were what it seemed to me as under construction? That just isn't the way to treat a customer, especially a Wyndham owner. 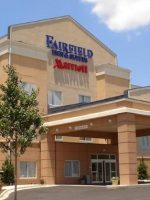 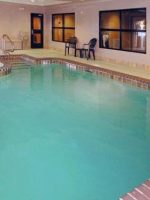 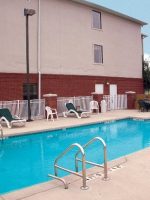 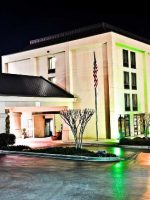 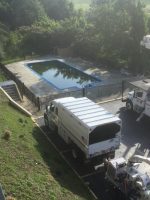