Ledges by the Bay
298 Reviews
Edit

Situated square in the middle of Maine’s mid-coast region, Ledges by the Bay is an old-fashioned motel hugging the roadside of Route 1 as it snakes up the coast. What sets it apart is the view from the topmost “ledge” — a panoramic vision of Glen Cove on Penobscot Bay, complete with a rocky shoreline, lobster buoys and sailboats at anchor that could serve as the cover of a Maine travel brochure. From there, a steep sloping lawn leads down to another “ledge” with a wide grassy area with Adirondack chairs offering a quiet place to contemplate the view (or, if you have kids, a field perfect for running and getting out some energy). Finally, a steep wooden stairway leads down to the final “ledge,” a somewhat rocky and muddy beach along the shoreline.

The lodging would never be mistaken for a luxury resort — it’s a bit rough around the edges in some places, with a ramshackle lobby, and the siding peeling from the exterior in some places. But the guestrooms are comfortable and quaint, and the location a few miles from both lobstering capital Rockland and chi-chi Camden makes it an ideal base from which to explore the contrasts of the coastline.

The motel doesn’t offer much in the way of special amenities or activities, though some perks — like a microwave and refrigerator in each room — makes travelling with the family easier. It has also added a small pool area that offers another place to relax.

Ledges by the Bay has 41 guestrooms in three different motel buildings overlooking the ocean. The rooms are a definite step above the average motel room and more comfortable than you'd expect from the exterior. Each is individually decorated, and full of homey and quirky details with a nautical theme -- model ships in bottles, seashell covered lamps and wooden gull figurines. Furnishings are a bit dated, with big satiny flowered bedspreads and big upholstered chairs, but the mattresses on the beds are plush and way more comfortable than any chain motel. Rollaway beds and cribs are available in rooms for a charge of $10; numbers are limited, however, so reserve in advance.

Deluxe Oceanview
The largest rooms at the motel, Deluxe Oceanview rooms each feature a king-sized bed, and sleep a maximum of two people. Families with older children, however, can reserve these for parents while putting kids in a superior or standard room (rooms do not connect, however). Sliding doors lead to private balconies with water views. The rooms feature bathrooms with both showers and tubs, and a second sink and vanity outside the bath. Each of these rooms also includes a refrigerator, flat-screen TV with DVD player, free Wi-Fi, electric fireplace, and a pair of binoculars with which to view the bay.

Superior Oceanview
The same size as the Deluxe Rooms, the Superior Rooms feature one king or two queen beds and private balconies with water views. Bathrooms have showers and tubs and a second vanity is located outside the bath. In addition, rooms include a refrigerator, box-set TV's with cable, and free Wi-Fi.

Standard Oceanview
These rooms include one queen bed, and private balconies overlooking the bay. Bathrooms have both showers and bathtubs. In addition, they include a mini-fridge, box-set TV with cable, and free Wi-Fi.

Coveside Retreat
In addition to the motel-style rooms, Ledges by the Bay has a two-bedroom cottage available to rent by the week. The cottage is decorated in a sleeker, more modern style, with one queen and one double bed. Among its best features is a private deck, which overlooks the bay. It also features a living room, full kitchen, electric fireplace, and free Wi-Fi. This cottage sleeps up to four people.

We enjoyed our visit to Maine. Room was clean and every one was friendly. I enjoyed the beautiful breakfast room overlooking the bay. Would recommend to anyone !! There are a lot of great places in the area to visit and dine OR shop !!!

Booked because of the reviews. Upon coming to Leeches By The Sea my initial thought was uh-oh.
BUT got down there it was quaint h I liked it. Got too the check-in & commons area- it's beautiful & awesome view! Got to our room - it's beautiful, very clean and equally awesome view of the water! Definitely a great place! Would stay there again definitely!

Pool
Up a stairway at the very top of the hill is a fenced-in area holding a small freeform pool, which is open seasonally from June 15 to September 15. The pool is heated, and ranges in depth from 4 to 5.5 feet. It's ringed by a white picket fence, and kids will like the fake palm trees that light up at night. The only minor drawback is its location in close proximity to the highway, causing a drone of rushing cars along Route 1 that quickly fades into the background. Pool towels are available in the office.

Beach
At the opposite end of the property, at the bottom of the steep hill along the bay, the "beach" is somewhat disappointing -- consisting of a muddy salt marsh chocked with slippery rocks and seaweeds. Still, children might enjoy hunting for snails and mussel shells along the shoreline. A couple hundred yards farther down the coast is a rocky beach area with a bit more sand, where it's possible for intrepid swimmers to take a dip in the bay.

From late June to September, Ledges by the Bay offers a free continental breakfast between 7 and 10 a.m. in a sunny room atop the lobby. Offerings are basic, consisting of coffee and juice machines, cereal, muffins, and other pastries from an area bakery. The resort is a short drive from both Rockland and Camden, both of which offer a full range of restaurant options for your other meals.

All About the Extras
Binoculars
For an even closer view of Penobscot Bay, some rooms include binoculars that guests can use to take in the scenery.

Extra Bedding
Rollaway beds and cribs are available in rooms for a charge of $10; numbers are limited, however, so reserve in advance.

The Art of Smart Timing
The hotel is open year-round, though the standard rooms are closed between October and March. Rates are highest in July and August, when the temperatures are in the 80's and the mid-coast area is crawling with tourists in search for their lobster dinners. Rates are lower in the late spring and early fall, when guests are taking their chances with the weather -- a jacket is essential to pack for the inevitable chilly night. They drop even farther in late fall through early spring, when the area takes on a slower pace, while still retaining a somewhat austere beauty.

Getting Around
A car is essential both to reach the hotel, and to get around the mid-coast region. The location right on the highway means that it's necessary to drive to all area attractions and amenities. Once in the neighboring towns of Camden and Rockland, however, it's easy enough to park the car and walk to shops, restaurants, and tourist attractions.

For Mom and Dad
The FOG Bar and CafÃ© in nearby Rockland is the perfect blend of sophisticated and casual, with local art on the walls, local beer in the glasses and local food on the plates, all done in a New American bistro style. As the night goes on, local bands grace a small stage area, locals start chatting with their neighbors and before long, out-of-towners may start to feel like locals themselves. 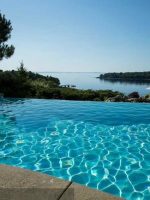 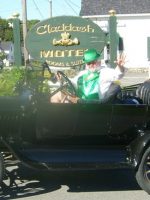 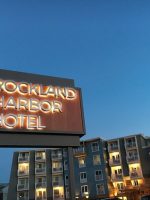