Clean and friendly. We checked out at 6am, so there was no time for breakfast. The shuttle bus service is excellent, however, it does not provide hourly service and it cost $5 per person. Overall, we had six friends staying in three rooms, and all of us were very happy with our stay.

The airpot shuttle is USELESS

I'm a flight attendant for Emirates Airline and I stay in hundreds of hotels literally all over the world. The room itself was clean and comfortable. Free Breakfast was decent.

My complaint? Why I give this hotel a bad rating?

The advertised Airport Shuttle service is terrible and it was the ONLY reason I booked this hotel.

I was on my vacation days traveling from Dubai all the way to Playa Del Carmen for a family vacation. I had a night stopover in Torronto and decided to treat myself to good night sleep at a hotel.

I emailed the hotel days in advance to ask for more information about the shuttle. Nobody answered.

I phoned the hotel 2 days in advance asking about the airport shuttle, and the courtious young man on the phone gave me some but not all information.

I then phoned the hotel three hours before my arrival at YYZ and they told me the shuttle could not be booked in advance, and that I should phone after getting through customs.

So I did that. They said the earliest to recieve the shuttle was 1HOUR- even though the hotel is only a 15 minute drive from YYZ, even though I TRIED to organize it in advance. I was arriving 10:30pm which meant the shuttle didn't arrive until 11:30pm. I arrived at the hotel at 11:45pm- got to bed just after midnight. My next flight was at 9am the following morning. The shuttle only goes every few hours- so even though I didn't have to be at the airport until 7:30am I had to wake up at 5:30am to catch the 6am shuttle.

I spoke to the front desk- voicing my concern in a polite way- they were polite back but had nothing to offer. I asked to speak with a manager- there was no manager on duty the evening I arrived or the morning I left.

Because of the infrequent shuttle service I only managed to get about 5 hours of sleep. The alternative would be to pay an extra 90$ for return taxi fare- but THAT WAS WHY I BOOKED A HOTEL WITH AIRPORT SHUTTLE SERVICE!

Next time I will choose a hostel in downtown torronto as Public transit is more frequent and reliable than Monte Carlo Brampton Inn shuttle service. 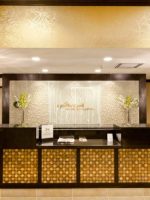