Occidental Tamarindo is an all-inclusive resort situated on the white sand beaches of Costa Rica. This resort offers spacious suites, on-site dining, children’s programs and a variety of recreational activities. An a la carte and buffet style restaurant provides families with on-site dining. Babysitting services as well as a children’s program are available offering a variety of fun activities. Kayaking, snorkeling, diving, tennis and volleyball are among the many recreational activities available at the resort.

We stayed at Occidental Tamarindo AI , this was not worth the price. For an "all inclusive " resort it left much to be desired. Superior ocean front room, a joke--if you squatted and squinted you could see the surf thru the trees - which were growing in front of all the ocean facing rooms, which were on state land & could not be cut. The bar was not stocked, only one of beer, pop, water etc. had to ask each time we were lucky enough to see the the fellow to bring enough for two people. The food at the buffet restaurant was ok, mostly. The second "good" restaurant was at the far end of the property and was a looong walk for my husband so we never were able to eat there. The spa was also at the far end and I will say that the two massages that I had there were among the best. Very few of the staff spoke any English, most none at all. Michele at the front desk was most helpful. The sliding door going out to the balcony did not slide, we had to tug & pull as the track was filthy--and the outside handle was broken off so you could never shut the door - AC running in the room. Our safe never operated properly, complained several times & finally it was replaced. The shower head was unusable as half of the water came out like a fire hose. One week-end the resort was RENTED OUT for a graduation party--I could go on but suffice it to say this was our worst stay at an - ha ha ha - all inclusive. By the way this was the second room that we stayed in as the first was not acceptable.

Our first time to Costa Rica will return, many locals vacation there, that was enjoyable. I do need to brush up on my Spanish however most guest and staff spoke English to accommodate. Ocean was clear and warm , we enjoyed watching the surfers early morning and evening. 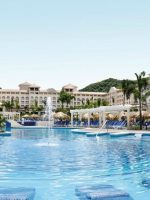 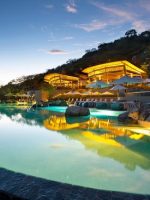 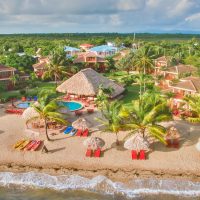 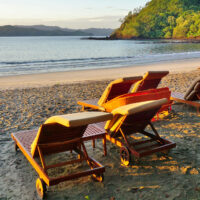