The accommodations are basic but comfortable and most have private baths. Don’t confuse this hotel with its much more popular sister property near the geyser, the Old Faithful Inn. Choose from lodge rooms located in the main building, or motel-style accommodations in the Western and Frontier Cabins. A full-service dining room and quick-service Geyser Grill provide on-site dining options. This lodge is one of the two park accommodations that open for the winter season. Generally accessible in winter only by over-the-snow vehicles, this lodge attracts many cross-country skiers.

although we did not have the experience we anticipated, the staff was very understanding.Their regional manager reached

the room was sparse and needs to be upgraded. basic amenities
the hotel has a captive audience, a renovation would be in order
great atmosphere in the lobby/common areas on the main floor which is not carried out in the room we stayed
restaurant does not accept reservations.
the "fast food" restaurant area was unappealing

Not A Big Enough Sample Size?

We had a reservation for the last two nights that this lodge would be open for the 2019 summer season. The Old Faithful Inn as well as most of the other accommodations in the park had already closed at some point after Labor Day. It was now October 18th & 19th with us having to check out on Sunday, October 20th.

We drove in from the north entrance and explored many of the sites along the eastern side of the park. We bypassed West Thumb Geyser Basin and made a beeline for the Old Faithful Snow Lodge (OFSL) when we realized we were losing daylight and still had some distance to drive. .

The first problem we had was identifying the entrance to the OFSL. It had started to lightly snow. The signs didn't make it obvious. We parked at one end of the lodge and wandered inside. We found registration and then followed instructions on where to park in the dirt lot on one side of the lodge.

Like the Ahwahnee Hotel in Yosemite or El Tovar Hotel in the Grand Canyon, these hotels located in the middle of a national park may be well known (this lodge was built in 1999, so not the more iconic Old Faithful Inn across the parking lot from us) but you won't confuse them with the Ritz Carlton or Four Seasons. Our room was fairly basic with a bathroom that probably hasn't received an update since the lodge was built in 1999. All this for $300.00/night. But you couldn't argue with the location.

I would call the OFSL comfortable. The lobby area exhibited the rough hewn beans that gave it that camping lodge fee. The lobby was adorned with many cozy chairs looking out floor to ceiling windows to Old Faithful Geyser, hiden behind the visitor center some 150 yards away.

Even during our late season stay the Obsidian Restaurant was open for breakfast, lunch and dinner (although we did not have breakfast or lunch there). The Geyser Grill, a counter, fast food place was down a long hallway of first floor rooms.

By the time we had returned from an early dinner in the Obsidian Restaurant the snow had started to pile up. .We knew our plans to explore more of the park might be in jeopardy. Sure enough when we arrived downstairs the next morning we were informed that we were not allowed to drive out of the lodge until the park rangers could give the all clear.

Long story short, we never left that day. Instead we walked over to the Upper Geyser Basin and hiked the various trails in the 4" of snow. The staff at the front desk did an excellent job of keeping all the guests informed while cautioning that with the lodge closing the next day, we should be prepared for a caravan out to the west gate in the morning.

The next morning the 32 rooms and 86 guests were told to be ready to go between 9:00 am and 11:00 am. Like the other guests we dug our car out of the now 10" of snow and parked in front of the lobby. We got the green light at 10:30 am and followed a park ranger with flashing lights out to West Yellowstone.

In summary I feel it is a little unfair to be critical given the circumstances. The rooms are not great and the price is high. The staff was excellent. I think I would consider different in-park accommodations next time if this wasn't the only lodge available this late in the season. . 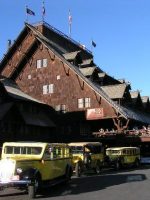 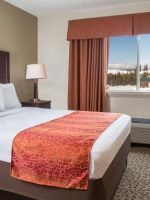 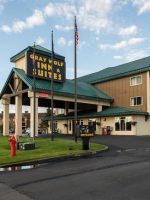 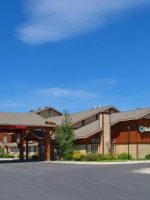 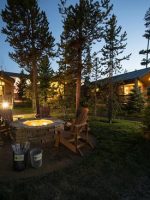 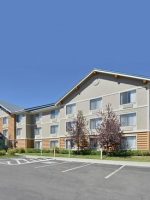