Family rooms here include a full kitchenette complete with refrigerator and microwave. They fit up to five people, and the multilingual staff will be happy to help you book adjacent rooms, if need be. The laundry facilities here are impeccable and include both dry cleaning and self-serve facilities. Families will love splashing in the pool on a warm day after enjoying the complimentary breakfast. Parking and fast Wi-Fi are also included in the price, which just goes to show how seriously the Residence Inn Birmingham Inverness takes its guests comfort!

THE staff is AMAZING. I gave them a 4 star because our room was not as clean as it has been in the past. And our loft are felt like we were in a sauna. They did try to rectify. The 250$ deposit i do understand to a certain degree. However they should make this in BOLD writing. I pride myself on reading the small print. and didn't see this.Last year i only paid 50$ deposit. I think it should be also based on whom is occupying the room.

We love condos and apartment hotels, but I would not come back to this one. Poor service. Poor housekeeping.

When we travel, we are big fans of condos/apartment-like hotels. We love Marriott residence inn, townplace suites, etc, but we decided to try this out. Unfortunately, we were quite disappointed.
This property appears to be an old apartment complex that they decided to “renovate” into motel apartments. They slapped up some new paint and placed modern furniture and curtains in it and called it a day. So on the surface it looks pretty nice; however, it’s poorly maintained. One or two of these complaints may seem minor, but they all add up to demonstrate a lack of care by staff.
I have small children and find myself playing on the floor and can tell that these floors are rarely vacuumed. I found several pieces of trash and a half eaten pretzel rod on the floor around the perimeter of our bed. There are bugs that have died in the corner and have been left. If they would have just ran a vacuum around the place before we arrived, it would have been fine.
There is mold around the bathroom fan and a yellowed half stuck sticker on the side of the tub- the one that’s on there when you buy it. Couldn’t someone have taken the time to remove it since this place’s opening?
We went to the pool, which was fine. They say there are pool towels and there are bins all over for them, but they are empty. I walked into the lobby and asked the desk for them. After about 5 minutes of waiting, they returned with 1 towel (there are 6 of us) and apologized, promising to bring out fresh towels in 10 minutes. I walked out and told my husband and another couple at the pool laughed and stated that they were told the same thing several hours earlier and they were still waiting. We were there for about 90 minutes and no one ever came to give us more towels.
Also, just so you know - the loft units are on the second floor. There exterior entrances with no elevators. When traveling with children, we have a ton of stuff. A bit of an inconvenience but not a deal breaker for us.
Last, but not least, my father nicely mentioned to the lobby staff on his way thru to consider getting a new American flag outside. The one flying above the welcome center was tattered and strings were flying every direction. And they literally just laughed at him. May seem trivial to some, but we’re a patriotic bunch. And the staff’s laughs completely illustrate the attitude and care they have about customers’ feedback.
Overall, this place is just really poorly cared for. The positive reviews may be from some time ago before the bugs and pretzels could accumulate in the corner.
I’d recommend skipping this place and finding yourself a Marriott. You may pay a bit more but you can rest easy not wondering if the housekeeping cared enough to change the sheets on your bed. 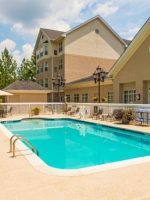 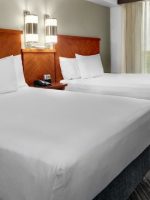 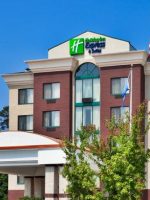 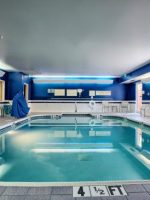 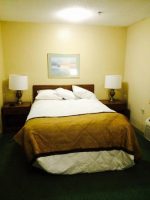 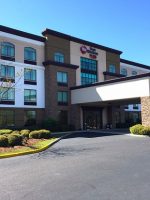