From the Residence Inn, families can walk to Times Square, Central Park, Rockefeller and the Empire State Building. Residence Inn’s 350 studios and suites are well-appointed with deluxe kitchenettes or kitchens, work spaces and free high-speed Internet. Dining and sitting areas are provided, perfect for families to spread out and relax. One- and two-bedroom suites contain sofa beds and separate living rooms. At Residence Inn, complimentary buffet breakfasts and newspapers are provided. Pets are also welcome at this hotel. The third floor hosts the Hearth Room, a common area where families can lounge about, watch television, eat breakfast and simply relax.

Great Location with a few Hiccups

When I booked my King Studio room for 4 nights, I emailed a special request asking for a view room. I received a reply that this could be accommodated and there would be no extra charge. I also called the night before arriving and was told i was already reserved a high floor room with a view. YES!... When I arrived at the property, I was told the King rooms were sold out, so they were putting me in a Queen room on the 11th floor. I was in disbelief that I paid for a KING and was told I would have a view room! So he apologized and said they sold out of the King rooms and I would have to talk to a manager. I waited for the manager, Daisy, who offered to put me in a double room for one night and could change to a KING room the next night, but she wasn't sure what time the King room would be ready, which is not what i wanted to do because that's a huge inconvenience to have to change rooms the next day, since we had a full day of plans. She then said we could pack up the next morning and leave our luggage at the front desk and when we came back our King room should be ready. I was very frustrated, but agreed. Then the first agent said to Daisy that he could now put us in a King room on the 16th floor, which I agreed. I was hoping for a higher floor, but really didn't want the hassle of having to change rooms.. Anyhow it was quite frustrating to deal with this after a long day of travel and i was excited about a high floor with a view!.. About the hotel: The location is GREAT! It is walking distance to Bryant Park, Herald Square (Macy's & Empire State Building), also a few blocks to Times Square, and very close to a Whole Foods market. The rooms aren't the most modern and new, but they are comfortable! The 3rd floor is nice with a lot of seating and a decent hot breakfast. The elevators are full around checkout time, but that's expected in a big hotel. most of the time the elevators were fast. The lounge is very nice.... Something to note: my credit card was authorized for the full amount of my stay the first night. Then the day after i got home there was an additional authorization for over $1,000. I called the hotel who transfered me to accounting and they said they didn't authorize that amount and it must be an error. I then had to call and dispute the authorization with my credit card so i wouldnt be charged that amount.Still not sure if that was an error by the hotel or somehow fraud but the authorization had the name of the hotel??

We stayed at the residence inn Times Square for the NYC marathon. The location was great for broadway shows and access to Times Square (short walks from the hotel). The staff was friendly and helpful. The breakfast and bar were average and were on a very low floor. 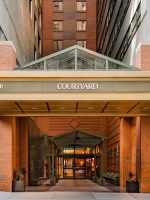 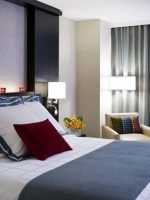 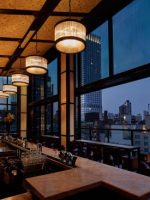 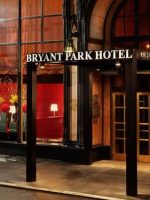