Located on the Eastern tip of the Dominican Republic, Riu Naiboa present lush, tropical gardens and water gentle enough for small children. The beach is lined with coconut palm trees. More than 360 rooms and suites are complete with standard amenities. Units are air conditioned with balconies or terraces, satellite televisions and mini-bars. Suites also present carpeted bedrooms and sunken lounge areas. Riu Naiboa is an all-inclusive resort; its rates cover all meals, snacks and beverages. Three restaurants offer buffet and a la carte options. Caribe Grill and Grill and Steakhouse require advanced reservations. Also, a range of activities and sports are included in the rates. The resort has four tennis courts, water sports equipment and scuba diving classes. Daytime and evening entertainment is planned for adults and for kids. Children can meet other young guests at the kids’ club for ages 4 to 12. An onsite playground and swimming pool are hotspots for families.

Just returned from Riu Niaboa in Dominican Republic we travelled in a group of 8 (4 couples) with a further 2 couples coming out the second week. Whilst I would say we had a fab holiday this was more down to the company enjoyed and the fabulous beach rather than the hotel. The hotel is lovely and clean Mon to Fri however the locals seemed to desend at the weekends and staff would struggle to cope, holiday makers already there would become invisible. The hotel could not cope with the amount of guests and you would struggle to get a shower or even flush the toilet at certain times of the day. The hotel is advertised as 24 hour all inclusive however this is not the case as the snack bar shuts at midnight or even earlier some nights and no food is available until breakfast next day. The bar is advertised as open whilst 6am however staff turn the lights off when they want to shut, the 24 hour all inclusive most refer to the optics in your room. The speciality restaurant (steak/italian) is a joke we visited on 4 occasion the service was poor and staff extremely rude and would walk away when asked any questions. On one vist our table of 8 only got 6 starters and 6 plates, on another we didn't get any wine even though we asked and on another we didn't get any starters and out final visit we waited 2 hours for a table even though we arrived early enough and guess what no starters (the locals didn't seem to be having the same problems as us). Prior to booking we where told that we could use the Riu Bamboo next door to have a drink or lunch again this is not true and depending on the mood of the staff you could be turned away. Whilst the animation team work extremely hard and long hours most of its in Spanish so most evenings we had to make our own entertainment. I would describe this hotel as a good 3 star budget deffinately not a Riu hotel, it's not 24 hour all inclusive, there no sports bar and the only bar available during the day is the pool or beach bar theres no hotel bar until 6pm.

We were 4 couples trvelling together as friends aged between 38 & 58. 21 Oct - 5 Nov for two weeks.
3rd time in a RIU hotel but 1st time in the Niaboa, hotel is clean and nicely designed. Most of the staff struggled to understand basic English which was a struggle at times.
There is only 1 pool at this hotel althought we were told at the time of booking that we could use RIU Bambo hotel and have drinks and lunch at this hotel this is not the case, you can walk around all the 3 RIU Palace hotels and Bambu but are not allowed to have refreshments and food, though we were aware about the Palace rule.
The restaurant - steak/italian - manager or head waiter was rude, didn't answer questions didn't understand us walked away when we weren't happy. 4 visits and received terrible service every time on one occasion no drinks, another no starters as we waited two and half hours to be served after requesting a table one hour before even being seated, local arrive at weekends and seem to take preference over other holiday makers. Not all staff had this atitude and some where very nice. We did have a fab holiday and made the most of the hot weather beach club bar and beach. My opion is this hotel is not RIU standard and does not offer the same as other RIU hotels. It is not 24hr unless you count the fact there are optic spirit drinks in your room, which i think is the only resemblance the hotel had to a RIU hotel. There is no sports bar (which is usually the 24hr bar) which was disapointing as Rugby world cup was on during our stay. The buffet restaurant was ok they tried to cater for everyone, we always found something nice to each.
They have 4 pool parties each week for adults, which are great and make up for the poor entertainment on some days, the animation team worked really hard and long hours trying to join e eryone in whenthey could. The water park is ne t door and free to use which looked good for bith children and adults. Pasha night cub was close to the hotel but drinks are not included also there is a casino a ross in the palace where drinks are also not included.
Overall i was disappointed with this hotel but we still had a fab holiday. 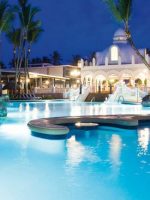 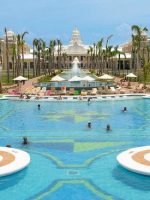 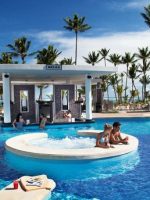 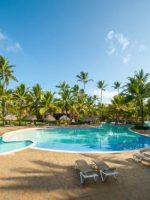 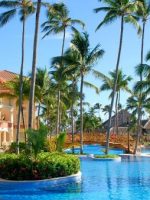