Historic hotels are a special piece of the New York City story. The Roosevelt — named after President Theodore Roosevelt — is a Jazz Age gem that opened in 1924, and celebrated its 90th anniversary in 2014. Once known as the “Grand Dame of Madison Avenue,” it’s located on an iconic street known for upscale shopping and dining.

While the Roosevelt retains its historic character and neo-classical aesthetic with lovely touches of marble, crystal and mahogany, there are a lot of new and renovated spaces at this property. There’s a new billiards room off the Madison Lounge, a completely renovated rooftop lounge and a renovated fitness center.

The hotel’s location on the east side in midtown Manhattan is a good jumping-off point in any direction. Even better, the location of Grand Central Station two blocks away offers tremendous convenience in getting around the city. This is a popular property for international visitors, and also caters to special events and meeting markets.

The Roosevelt offers a wide range of room sizes to fit all budgets, from “cozy” rooms to suites with two bathrooms. Since there are no connecting rooms, the larger rooms, particularly the suites, provide the most space for families. For the best views, request a room on the upper floors — this will also provide distance from the busy street noise.

The Roosevelt has 1,015 guest rooms on 18 floors. The 982 standard rooms range in size from 200 to 400 square feet, while the 33 suites are larger, with varying sizes. The top floors offer expansive city views, and provide a barrier from the street noise below. The advantage of being on a lower floor is the ability to take the stairs down to the lobby in the morning, when the wait for the six elevators can be very long due to the volume of guests going out for the day.

The dÃ©cor strives to combine traditional elements, and even some art deco touches, with contemporary comforts, particularly the crisp white bedding. Standard amenities include iPod/Mp3-equipped clock radios; pod-style coffeemakers with Green Mountain products; dual-line telephones with voicemail; dataport capabilities; hairdryers; safes; irons and ironing boards; and luxury bath products (Bath and Body Works and Bulgari). There is a fee for wireless Internet, which ranges from $15.95 to $19.95 per 24-hour period depending on the Internet speed you want.

There are flat-screen TVs with kid-friendly cable channels (Disney, Nickelodeon, Cartoon Network) and on-demand movies in each room. The TVs act as a source of information as well, with an "E-TV" program that allows you to see your bill, get messages, find out what the daily dining specials are and get local travel information.

There is no charge for cribs if you need one. Rollaway beds, available for $30 per night, are only allowed in the suites, since there isn't enough space for them in standard rooms.

In addition to the standard amenities, the spacious suites have a mini-fridge and microwave. We appreciated the full-sized table and four chairs in our suite that allowed us to comfortably dine in our room.

Updates to the dÃ©cor and fixtures keep this historic hotel looking fresh, but expect some quirky characteristics that show the property's age, such as uneven floors and dated bathroom tile.

One-Bedroom King Suites
In addition to the standard amenities, these suites are configured with a living room and dining area, and the hotel's signature bedding package, with a plush down comforter on a king bed.

Superior King
These spacious rooms feature a king bed, work space a with desk chair and all standard amenities.

Cozy Queen
These rooms with a queen bed are priced to reflect less square footage than other rooms, but contain all the standard amenities.

Cozy Double
These rooms with two double beds are priced to reflect less square footage than other rooms, but contain all the standard amenities.

The ONLY place to stay when in Manhattan

There’s a reason The ROOSEVELT has been a staple in Manhattan for so many years. The combination of old wold charm, incredible ambiance and amenities and a fantastic staff make this THE BEST HOTEL in Mid Town Manhattan.

No desk, remote for tv didn’t work and asked twice to change it but nothing. No take out from bar/restaurant, cleaning people rude etc etc no desk had to use the bed to work on during a business trip!!! Told them they didn’t care.

This historic hotel is located on Madison Avenue, close to Grand Central Station. This prime location draws leisure and business travelers from all over the world who come to experience New York City itself. Therefore, you won't find any onsite children's programs, nor any indoor play areas or pool. There is no outdoor playground or green space in this urban setting.

Local New York City Attractions
As a base for exploring midtown Manhattan, this property works well. Bryant Park, with its cute carousel, is four blocks away. Within 15 minutes, you can walk to Rockefeller Center and Radio City Music Hall. Within 20 minutes, you can reach the tram station at 59th Street and Second Avenue to ride over to Roosevelt Island, named after President Franklin D. Roosevelt.

If you're willing to walk a mile, you can reach two of the highest-rated playgrounds in Manhattan: Police Officer Moira Ann Smith Playground, between Fifth Avenue and Madison Avenue at 26th Street, and St. Vartan Park at East 36th Street and First Avenue.

Within two minutes, you can walk to Grand Central Station and access the rail and subway systems, connecting you to the rest of Manhattan and the outer boroughs. There used to be a secret underground passage connecting the hotel to the station for "VIP" use, but it's a street-level walk now!

Roosevelt Grill
This is the main dining space at the Roosevelt, serving breakfast daily from 6:30 to 11 a.m. The dÃ©cor is traditional, with photos displaying the restaurant's glory days, when famous entertainers like Guy Lombardi performed there. The breakfast menu features Ã  la carte selections like egg dishes, breakfast sandwiches, freshly-baked pastries and cold cereals. There's also a buffet with hot and cold selections. Highchairs are available.

Madison Club Lounge
This space, just off the main lobby, feels like a classic lounge, with mahogany paneling and 30-foot bar, stained glass windows and leather chairs. There's a new Billiards Room off the lounge with pool tables and flat-screen TVs.

In the morning, the bar serves Starbucks coffee products and continental breakfast items from 6 to 11 a.m. From 11:30 a.m. (noon on Sundays) through 1 a.m., the menu features lunch and dinner fare. Check the hotel's calendar of specials upon arrival -- events such as Wine Down Wednesday feature $7 glasses of wine.

All About the Extras
New York City Information
In each room, you'll find a "Where Guest Book" and a "Promenade" magazine with coupons and information on things to do and see in New York City. Another source of information is the touch-screen kiosk in the lobby near the elevators, where you can buy tickets for attractions and shows, book your own sightseeing tours, and make airport transportation reservations through Super Shuttle.

Gift and Retail Shops
On the lobby level, the hotel gift shop carries souvenirs, snacks and some personal care items, including baby shampoo, lotion and powder, but no diapers. It's open from 7 a.m. to midnight. There is also an ATM in the lobby.

On the lower level, a row of upscale shops are available for guests, including Swarovski, Clarks, The Art of Shaving, Ambassador Luggage and the Jen-Claude Biguine hair salon.

Wi-Fi Access
Wi-Fi fees range from $15.95 to $19.95 per 24-hour period depending on the Internet speed you want. There is also a fee to use the two computers in the lobby, as well as the computers in the Web Zone business center, although you can print out your boarding pass for free.

Parking
Valet parking is available at $65 per 24-hour period.

Check-In/Check-Out
Check-in at this non-smoking hotel is 3 p.m., and check out is noon.

The Art of Smart Timing
New York City is a year-round tourist destination, but it's busiest in the spring and summer months, when the weather is pleasantly mild. Winter holidays in late December are also a popular time, even though it's cold. Room rates rise during these times, and fall in the cold winter months of January and February.

You can take advantage of package pricing with a variety of different offers, including a Bed & Breakfast stay that includes breakfast at the Roosevelt Grill, a Mad Men in the City package, and a special first-night discount for any guest with the last name of Roosevelt.

Getting There
There are three major airports serving New York City -- LaGuardia and JFK are the closest to this hotel. Drive times to each, with no traffic, are 30 and 40 minutes, respectively. There isn't an airport shuttle, but there are ground transportation services available at both airports, including the Super Shuttle and the Go Airport Shuttle. Taxis will cost approximately $30.

If you drive your own car into the city, you can self-park at a privately owned parking garage. The two closest garages are on 46th Street between 6th and 5th avenues, and on 44th Street between Madison and Vanderbilt Avenues.

Getting Around
The concierge is helpful and will offer information, suggestions and street maps for New York City. They can help you arrange sightseeing tours, make restaurant reservations, book a rental car or even help you rent a cell phone. You can contact the concierge before your visit through the hotel's website if you want to make these plans in advance of your visit.

The Roosevelt is located two blocks from Grand Central Station, where you can access the city's subway system on multiple lines, or the Metro North Railway to points north. Taxis can be hailed in front of the hotel with the assistance of the friendly doormen. However, in true New York fashion, walking may be the best mode of transportation.

For Mom and Dad
For a night out, you can stay on-property and enjoy the mad46 rooftop lounge, a chic rooftop spot offering skyline views, signature drinks and creative small plate dishes. Because it's outdoors, it's only open April through October, Monday through Saturday, 5 p.m. until midnight. The Vander Bar is also an option, with a menu that includes hand-crafted cocktails, draft beer and an extensive wine list, as well as light gastro-pub fare. It's open Monday through Friday, noon to 9 p.m.

With Grand Central Station so close, nightlife across the rest of the city is easy to reach. Take the Times Square shuttle subway (S) to get to a Broadway show within minutes. 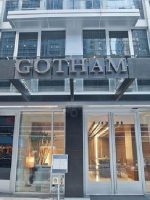 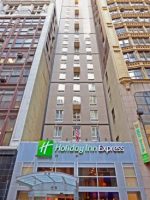 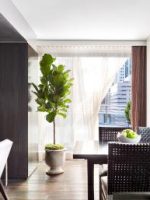