Roula Villa is a budget two-star family-friendly hotel complex located in Perissa, a short walk away from the black sand beach. It’s family run and has a friendly, welcoming atmosphere. Guests can choose from 28 standard rooms, maisonettes or superior rooms, some with a hydro massage hot tub. Family rooms have kitchenettes available and there are balconies.

There is a large swimming pool area with a sun lounging deck and garden for families to spend time at, with a pool bar for drinks and snacks. The hotel is located close to amenities such as shops, a bakery and car rental services. Roula Villa offers Greek themed nights with music and entertainment. There is also a babysitting service available to guests.

It started with great communication prior to arriving, then a warm welcome when we arrived from the airport.

Our standard room was ok but next time I would upgrade.

The pool area is relaxing and friendly with a bar open all the day.

Perissa is a great location with a good beach and plenty of places to eat and drink. If you want to visit town or the airport the public buses work well and are about 200m away.

We had never been to Santorini before so chose Roula Villa at Perissa. I'm so glad we did. Thira/Fira is a tourist trap - prices for food and drinks are almost twice what they are at Perissa and quality generally isn't as good. Also Fira is at the top of a cliff so if you want to swim at a beach you need a car or take one of the local buses.

Perissa has many restaurants and the beach is great and the water is so clear and salty! Perfect. From the airport it is either two buses to Perissa (change in Fira) or take up the hotel offer of a 30 euro transfer - it's the best price I was able to find and makes it so much easier.

Roula Villa is family run by a brother and sister with a long history in the family. The rooms are clustered around the central pool which is wonderful during the warm summer days. And the central pool gives it a nice piazza / family / community feel.

We would go to the beach during the morning (which I should say is only a short walk from the Villa), grab a shower back in the room, then lunch at one of the many restaurants followed by siesta and swimming at the pool. They have a bar with fair prices for drinks and the love their music is obvious. Aggelos doesn't take much prompting to start the music and we were thankful for Sissy to keep things organised and running smoothly.

At the bar I truly enjoyed the Volkan dark beer. It's a dark beer without the bitterness of many. Aggelos explained that it has a touch of Santorini honey. It works really well - try one.

We booked one of the standard rooms - it was fine and good value - but next time I would spend a little more and get a better room. I think it would be money very well spent. The standard rooms face outwards towards a dusty carpark and the floor was often covered in a fine layer of grit.

Greece is a very dry country and at Villa Roula they have bore water which we preferred not to drink but I assume it is ok. There is a mini market not far away and 6 x 1.5L of bottled water was just 2 euro. They also had fruit, fabulous Greek yoghurt and other offerings for your dinner or breakfast.

If you have your own car there is parking next door. Rental cars and the buses to Fira are also very close.

Really, this is a lovely place that is difficult to fault. You very quickly become part of the family and we look forward to returning. 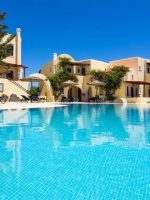 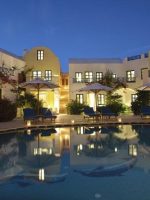 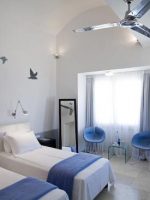 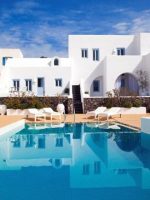 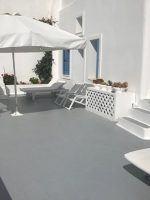 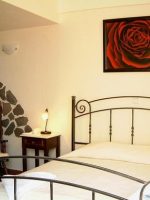